Seoulbeats March Madness 2016 has arrived! Pay close attention because we’re doing things a little bit differently this year. Instead of categorizing contestants based on skill set as in years past, we’re now pitting them against those who debuted in the same year.

Because the K-pop landscape has changed so drastically since 2012, we’re focusing on the stars who’ve significantly contributed to this shift, the ones who debuted in 2012 or later. It’s amazing how so many performers have made a name for themselves in just the last four years. This then begs the question, which class of debuts is better: 2012, 2013, 2014, or 2015? 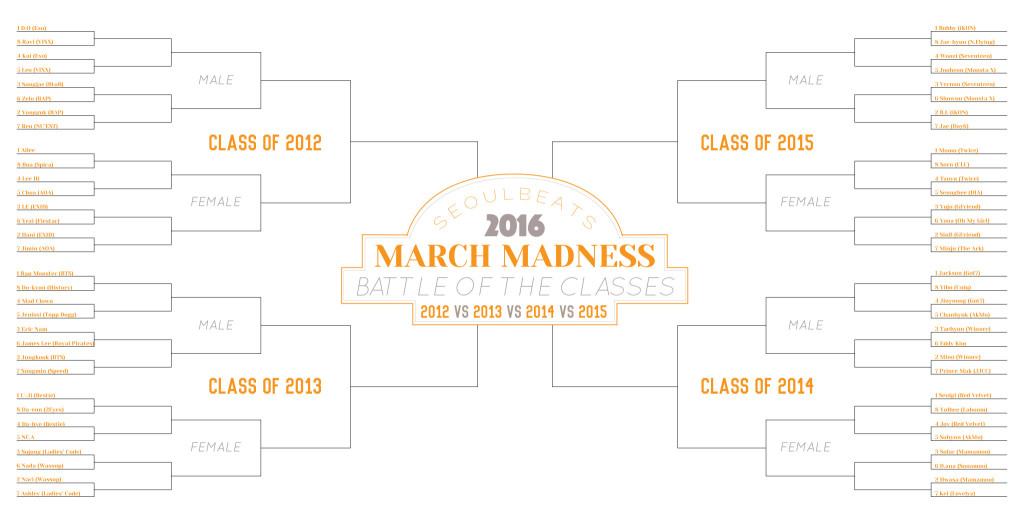 In case you are unfamiliar with how this works, the bracket above represents an elimination tournament in which the winners of each round will be solely determined by the votes of our readers. Starting with a field of 64, subsequent rounds of voting will narrow the field down to the best male and best female of each class. At this point, the males and females will battle it out for the right to represent each class in the Final Four.

Other than voting for the winner of each matchup, your job also includes predicting the winners. Fill out the quick survey below to enter yourself in the chance to win a $30 credit to the Seoulbeats Merchandise Store. The winner will be determined by who comes closest to predicting the actual results of the tournament. Please limit one entry per person and make sure to input a valid email address or social media handle where we can reach you. We will be accepting entries until Sunday, March 13th 11:59 PM EST.

What are you waiting for? Fill out the survey below and come visit us on Monday, March 14th for round one of Seoulbeats March Madness 2016: Battles of the Classes!

And, no, we didn’t change the format just so that Jaejoong won’t win again. That was clearly not our intention. Nope.

Readers, what are your thoughts on the new format? Who will you be backing? Who’s going to win it all?