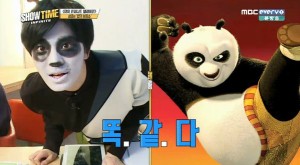 And that’s it folks! We are now in the final two episodes on Infinite Showtime. Admittedly, it’s been a rough road for me. I don’t know if it’s because my own viewing preferences have changed, or if it’s just that several episodes just didn’t do it for me. I’ve been vocal about how I prefer Infinite together, rather than apart; so when I started the final two episodes, I had hoped fro some group fun.

For those curious, yes, both episodes had Infinite together. How could they not with this being the finale? Episode 11 has the members separate and do their own type of internet blogging style broadcast, and episode 12 brings the season to a close by having Infinite in a variety of situations.

Episode 11 had the potential to be, well, boring; especially since this was also livestreamed, meaning we are only getting several select scenes. It also helps that only four members (Sungjong‘s makup transformations, Hoya‘s caricatures, Sunggyu‘s free communication with fans, and Dongwoo‘s home training class) were chosen to do the individual broadcasts, thus eliminating the more snooze-worthy ones like Myungsoo‘s eating show because really, how many more of those do we need? 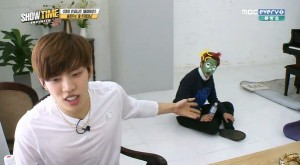 And what about the other three members? They help with the other members, appearing as guests. Myungsoo joins Dongwoo and Hoya, and Woohyun is initially Hoya’s drawing room before bursting in singing into Sunggyu’s room. Meanwhile, Sungyeol joins Sungjong and tries to avoid putting any of the costume makeup on. He, of course, fails and turns into Dooly.

Still in his Dooly makeup, Sungyeol then joins Dongwoo for some exercise.

Luckily, it is slightly on the more entertaining side thanks to the constant bickering that Infinite often engages in, usually started by something said by Sungyeol. But also because Inspirits love making Sunggyu do hilarious things.

Also, we get to see Myungsoo breathless after the exercises he had to endure. Myungsoo fans must be pleased.

As Episode 12 was the final episode of the series, it asked the question of what does Infinite really want to show on Showtime. It turns out, this was asked even before they started shooting the first episode, and the answers to the question would have to be done. 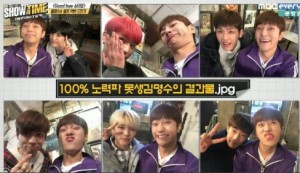 Instead of the traditional farewell and reminiscing episode that almost all idol variety/reality shows end with, we get Infinite in a variety of situations instead. To make sure that everyone knows that these are the members’ answers and not something written by the writers, it is even in the member’s original handwriting on the panel.

Considering that it had been some time since they answered the questions, it’s only natural that they all forgot their answers. Which usually resulted in them all laughing or being surprised at what others, or  they themselves, wrote. These include answers such as Sunggyu’s “My smile,” which somehow turned into YaJa time, ridiculous (Dongwoo’s “have a date in a crowded place”), and confusing (Woohyun’s “refreshingly candid myself”).

Since most could not be done properly given the time frame, there were alternatives instead. Dongwoo’s date in a crowded place turned into an Ideal Type Olympics, Hoya’s witty image answer turned into him giving three line poetry, and Myungsoo’s image change involved him putting on a purple tracksuit and doing very weird and cringeworthy aegyo.

There was also a second question that asked what each member did not want to show during the filming. Most of them put down outdoor filming, which they did in the very first episode, but Dongwoo wrote watching the sun rise and Myungsoo, true to self, wrote “uhm..hahaha.” 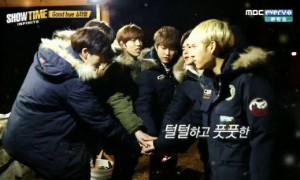 Sunggyu also answered differently. Because he is the leader, and despite what his image may tell you, he almost always takes things seriously when it comes to the group. So when the members predicted that he answered something similar to “We will work hard on anything,” you knew that that was exactly what he did. It’s understandable, since he is responsible for the group as whole.

It also leads to the staff bringing out a die. The members write down whatever they want on the sides, for Sunggyu to throw and work hard on. Of course, the members take the oppurtunity to get some revenge, which Sungyeol, as he says, is not sorry for.

And with Sunggyu running along Apgujeong in a similar fashion to Sungyeol in one of the previous episodes, we get a brief montage, a final interview, and Infinite Showtime comes to an end.

I don’t know about you guys, but I’m glad this is over. It’s been a rough journey for me to finish watching and come out of the episodes feeling fully satisfied. It’s nothing like their previous shows, even though Infinite themselves are still as entertaining as they could be. At least, in theory. 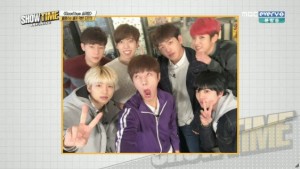 No, instead, I’m putting the blame on the PD team. While I’m sure that this Showtime might be one of the better ones — again, the only Showtime I watched was Exo‘s run, and I got bored pretty quickly — the format of the episodes and the general missions just didn’t give me any memorable moments. And all Infinite shows have some sort of moment which is truly memorable.

You Are My Oppa? had Epik High giving Infinite the sex talk, Infinite losing Tablo‘s credit card, and Myungsoo looking for Jiae in the room by lifting up clothes. Sesame Player gave us plenty to talk about, amongst which were their rabid escapes from their managers. Ranking King established that Myungsoo is a fool, and was one of their most entertaining shows. This is Infinite was their return after a vacation from variety, and they delivered scenes that included, but were not limited to, Sunggyu doing the “24 Hours” dance in the middle of a busy plaza.

But these are all Mnet-helmed shows — yes, Mnet of the legendary editing, and Infinite Showtime is a MBCEvery1 show. Given Infinite’s history, I’m going to just say that it’s just the difference of producers, writers and editors.