Tuning in to Infinite Showtime: Ep. 1-2 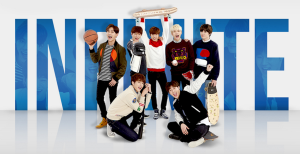 It’s probably a little known fact that I spend plenty of time watching idol variety/reality shows. And while I may wave my Starlight flag frequently, I’m still an Inspirit at heart, so is it any surprise that I’m here reviewing Infinite’s Showtime?

Showtime is a show I covered once upon a time … until EXO completely bored me to sleep one too many times that it took me almost a year before I finished all their episodes. Unfair because it was EXO’s first show, I know, but it was a traumatizing experience for someone who enjoys idol shows. This is not a fear with Infinite, whose season of Sesame Player, Birth of a Family and Ranking King are personal favorites. Infinite are variety experts, so everyone knows an Infinite show is going to be a good one.

As always, there will be spoilers for those who have not watched it.

Episode one starts off with something similar to all idol variety shows: those awkward entrances and introductions. Luckily, Infinite are pros at the variety game and are able to shake it off quickly. And because this is Infinite, of course the awkwardness in those first minutes is shaken off with them dragging each other, something Infinite is so known for they had a whole show made from it (Diss is Infinite). In this case, it is Woohyun asking a simple question of why Hoya looks like a manager, and this sets off the other members’ nervousness as they joke around. 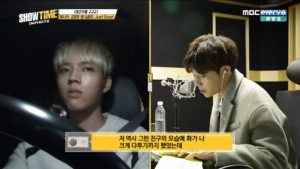 The first episode starts with a simple two-part mission. The first parts involves the Infinite members choosing a car key from a can, and this car key will lead them to a car that they will drive. Sunggyu ends up getting the luxury car, Sungyeol and Sungjong share a car and Hoya gets the old car, much to the pleasure of his members. (Kudos to the editing for using the goat sounds from Reply 1997 whenever it applied to Hoya, something I hope will continue on for the rest of the season.)

I’ll be upfront: I love the first mission. Guys driving is a weakness of mine, or, in this case, Sunggyu driving is my weakness. Another weakness? Myungsoo singing, even if it is the brief snippets we get scattered throughout the episode. Safe to say, watching Infinite Showtime is bound to wake my Sunggyu and Myungsoo bias loving side.

The second part of the mission is where the show gets interesting: the members are to drive around in their assigned car before turning the radio on at midnight. And when they do, they hear a live broadcast from Sunggyu, who is the DJ for the segment. 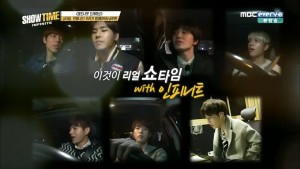 As Sunggyu said in a separate interview, Infinite has been together for a long time. But this year, there was a shift, something that fans most likely saw and worried over. Due to the separate schedules each member would be doing, the members haven’t been able to just be together without it being a schedule for a long time. This is a healing broadcast, or at least something aiming to help just get the members close again, through small missions and shared stories.

It is here where I come to a realization: Woohyun’s smiles are back. And this makes me smile. He seemed to be having a rough patch earlier this year, and just to see him smiling smiles that reached his eyes was heartwarming. This is elaborated a bit in the last story – the weight of being the main vocal and having to perform perfectly every single time had taken its toll on the seemingly-ever cheerful Woohyun.

My first impression of the first episode is simple enough. It is a good introduction to non-Inspirits, since it introduces each member and a little bit of their true personality in an easy to digest way. This is through the use of their nicknames that are connected to their personalities and through the stories. For Inspirits, it was a heartwarming hour to reminisce Infinite’s rise from their humble beginnings to the level they are at now. It also quickly went from amusing to emotional due to Hoya and Woohyun’s stories of struggle, giving fans a snippet of what they had already suspected but couldn’t really confirm until the show. 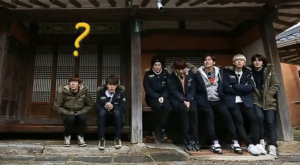 Honestly, one would expect this kind of episode to be the very last episode of an idol show, because that is the standard formula. Almost all idol variety/reality shows start awkwardly introducing the idols in some way, then end with memories from the time spent on the show.

That being said, the second episode is a different beast. Infinite and cooking, as most would guess, simply do not mix well, and might just lead to awful results. Just the preview alone gave me war flashbacks to Sesame Player and the sorry state of their kitchen, and again to Sunggyu’s recent guesting on Take Care of My Fridge where the chefs had the difficult obstacle of trying to cook something from the dorm fridge which had barely anything inside.

So, yes, episode two of Infinite Showtime is a blast. 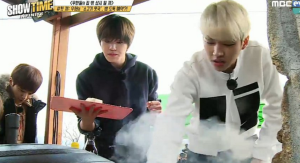 To make things more difficult for Infinite, they are cooking in a traditional Korean house with an old fashioned outdoor furnace that needs wood to work. The moment the PD asks them what they want to eat, they are alert and know what is going to happen. And thus, they name mostly easy to cook dishes – going as far as to ask Woohyun, the ‘best’ chef in the team, if he can cook said dish.

There is, of course, a twist: everyone has to eat every dish and they can only start preparing the next meal after everyone has finished. That’s seven meals they need to finish before filming can finish. So yes, this is an episode split in two.

The second episode covers the first four dishes, with mini games to determine who will wash the dishes, in between. While we went into the first dish thinking Woohyun, the self-proclaimed best Infinite chef, would be doing all the cooking, turns out he made the first dish too spicy. The easiest to prepare was Myungsoo’s suggestion of rice wraps, and then Sungyeol and Sungjong both take over for the third and fourth meals. 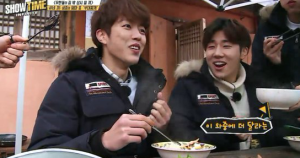 And that is where the episode ends, with three more meals to get through in the next episode. By the looks of it, it goes on until the night, with the sun clearly gone and yet Infinite still cooking in the preview.

All in all, Infinite Showtime is a must watch. The last show Infinite has was This is Infinite, and since then, they have been busy with their world tour and promotions. As the year comes to a close, what better way for Inspirits to relax than to watch Infinite’s hijinks? As for non-fans, if you’re looking for a show to watch to past the time, Infinite Showtime is a show one can easily get into.

On one last note, does anyone even bother calling Myungsoo by his stage name, L? 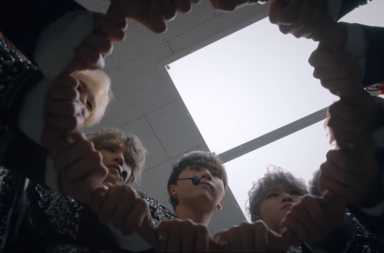