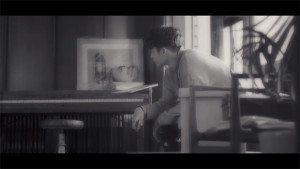 Two years after his last digital single, the upbeat, spring-appropriate “Bomtanaba,” Seo In-guk has returned with a mellow British Soul ballad, “Seasons of the Heart.” He worked with Melodesign, the team behind many of VIXX‘s songs, to compose the track and pen the lyrics. Although he has been focusing on his acting career for the most part, taking on lead roles in dramas like High School King of Savvy and I Remember You, his new release is simple yet compelling, revealing a new depth and maturity to his music.

The MV was produced by Mustache Films, whose works include the MVs for Kisum‘s “You & Me” and Lim Kim‘s “Stay Ever.” In “Seasons of the Heart,” the team contrasts its signature soft vintage colours with black and white shots to evoke a melancholic mental landscape. The monochrome scenes are shot in soft focus, and the diffused lighting gives the scenes a dreamy, wistful mood that sets the tone for the sequences in colour.

In the black and white shots, Seo In-guk enters a room filled with boxes and suitcases, familiar metaphors for an attempt to attain emotional closure after the end of a relationship. He sits, a pensive expression on his face, and begins to recall snippets of his relationship. There is nothing new about this setup, but the camerawork, aesthetics, and editing come together to portray the persona’s mental landscape and perfect the poignant mood. 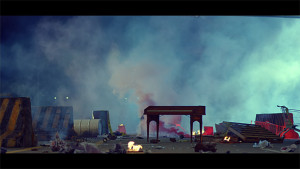 The opening sequence establishes a few settings that recur throughout the MV. The camera cuts from the diffused black and white shot of Seo In-guk to a contrasting, sharply focused shot of a lone piano in a car wrecking yard. This shot tilts gently from side to side while zooming in on the piano, making it seem like it is seen through the eyes of someone walking towards it. Between monochrome shots is an empty library aisle, followed by a slow zoom in on a slice of uneaten rainbow cake surrounded by remnants of food and drinks. The piano appears again in the next shot, except it is now in a junkyard filled with smoke, a few small fires scattered around.

The absence of people in these shots has two effects: it feels incredibly lonely, and hints that these places are not real, but rather accessed through the memory of Seo In-guk’s character. The idea that these places are scenes in his mind is reinforced by the odd, repeated presence of the piano in random places, and the fact that Seo In-guk is wearing the same clothes in every scene. He rounds a corner in the library in search of his ex-lover (played by model Kim Jin-kyung), but he is greeted by the piano in the middle of the aisle, a reminder that she is gone and he can only revisit their times together through his thoughts. 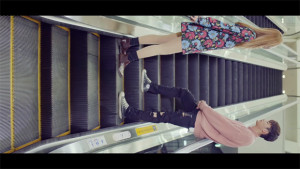 The most fascinating shot in the MV is perhaps the scene of Seo In-guk and his lover going up the escalator. It is set in happier times, and the pair smile as they face each other and hold hands. But the shot is rotated such that it lies on its side, suggesting that something is off-kilter. The feeling that something is wrong is heightened in the next shot. In the burning junkyard, Seo In-guk looks at his girlfriend, who sits in a shopping cart. The other people around them are running from something, but they are oblivious to the panic and danger around them.

The cracks in the pair’s relationship surface in a sequence of their arguments in various places — the library, the restaurant, a car, a lift. They kiss and make up in each of these scenes, but there are subtleties in Kim Jin-kyung’s expressions that point to conflicting emotions. For instance, when Seo In-guk leans in to kiss her, there is a hint of resistance in her eyes before she gives in, suggesting that there are tensions between them that can’t be fully reconciled. The longer camera distances and soft colours evoke a dreamy, faraway mood, preventing the scenes from feeling too overwrought. Instead, it allows a sense of regret to permeate both the tense moments and the sweeter ones.

The song itself is mellow but moving. The lyrics use the four seasons as a figure of speech:

You’re like my spring and summer, autumn, winter
You’ve left me alone and slipped away in the gap between the seasons
You’ve gone far away, without a trace 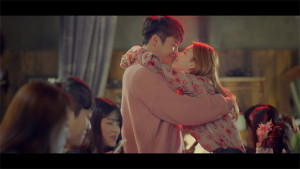 The instrumentals are simple — a piano plays single notes in chords, and guitar and strings enter in the bridge, building up to the chorus. In the second bridge, more layers are introduced in the form of harmonisation and more accompaniment on strings. The melody rises and falls gently, and is given precedence over the instrumental.

On the whole, the MV and song don’t take on anything radical, but they are incredibly well-executed and support each other. Care is given to details and subtleties, resulting in a ballad that I can see myself coming back to again and again.

Readers, how do you think “Seasons of the Heart” compares to Seo In-guk’s previous releases? Which is your favourite?