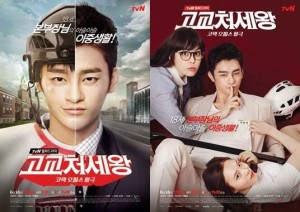 tvN has been on a roll with its well-received slew of dramas and High School King of Savvy (henceforth High School King) is no exception. Before airing, the premise was cause for concern — how could a high school student pretending to be his older brother in the corporate world be believable? — but the execution has been wonderful.

Seo In-guk plays Lee Min-seok, a slacker high school student whose only real passion is hockey. After his brother, Lee Hyung-seok, fails to show up from Germany, Hyung-seok asks Min-seok to cover for him at his new job. Why Hyung-seok cannot reveal himself is still a mystery but after such strong episodes, I have faith the show knows what it is doing.

Of course, a high school student posing as a team manager at a big company is sure to come with hi-jinks and comedy and High School King delivers. Seo In-guk is the epitome of teenage boy as he gets distracted by cleavage, abuses his new found power, and pouts when he doesn’t get his way.

Luckily, the character never truly comes off as a jerk. His merciless teasing of Jung Soo-young (Lee Ha-na) is combined with actual interest in her and when he does realize how he hurt her, he genuinely does his best to apologize. Seo In-guk combined with excellent writing bring depth to a character that easily could have been unsympathetic. 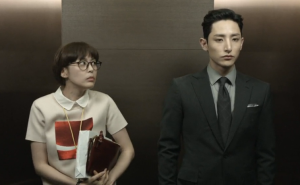 But whereas Min-seok is multifaceted, the two prominent women in the drama, sisters Soo-young and Yoo-ah (Lee Yeol-eum) are not. Soo-young is your typical stereotypical K-drama ‘heroine’ who is awkward, plain, modest, meek, and presented as a huge contrast to her glamorous co-workers. Lee Ha-na has done a great job portraying her character; my qualms are not with the actress but with the writers.

Soo-young started off interesting with her escapades about pheromones but quickly veered back into safe, boring territory. There’s little substance to the character, aside from her extensive capacity for kindness. Instead, she seems to serve as plot points for our protagonist Min-seok as she provides the necessary entanglements to further his character. Although women like this do exist in real life, the over abundance of this archetype in K-dramas diminishes Soo-young’s value as a character.

On the other side of the spectrum, we have the bold and persistent Yoo-ah. Yoo-ah is a classmate of Min-seok and hopelessly in love with him. Of course, this is not a healthy love as she is a stalker. The show attempts to romanticize her behavior and many viewers find her compelling but her actions make me uncomfortable. The fact that she installed a GPS tracking app on his phone without his knowledge is not cute and her constant interfering in his life is just sad. 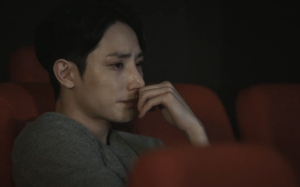 Continuing the trend of rounded male characters, we have Yoo Jin-woo played by Lee Soo-hyuk. Jin-woo is the focus of Soo-young’s one-sided crush (until episode four begins to hint towards her stirring feelings for Min-seok) and while not interested in her, he lets her down easily but firmly.

He is, however, a tortured soul, seeking daddy’s approval as an illegitimate son. Although Jin-woo can easily become a one dimensional character, the show gives him hints of depth, especially as his envy arises when he spies Soo-young, Min-seok, and Assistant Manager Yoon drinking together one night.

The plot thus far has focused on Min-seok’s impersonation of his brother and the complications that come with it and this is where the comedy gold is. Min-seok having to give his opinion in meetings and fake his way through corporate talk are definitely highlights. Seo In-guk’s acting is on point and he carries the drama where a lesser actor would have failed.

Overall, High School King made a great impression on me due to Seo In-guk and its heartwarming comedy. And although I complained about some of the characters, they still add to the story and make the drama an enjoyable watch. Here’s to hoping they become more fleshed out as the fun continues!

Thoughts about High School King? Speculations as to why Hyung-seok needs Min-seok to fill in for him?