As part of the EXIT Movement, Winner’s Taehyun makes his brilliant solo debut in the surprisingly mature “I’m Young.” The name of this song may give the impression that it is a typical party tune that celebrates the recklessness of youth, but instead, Taehyun provides a mature look and sound. Considering the criticism he has received in the past for being immature and impolite, this solo debut is a smart PR move for the young singer.

The MV immediately distinguishes itself as something unique in the K-pop world thanks to its aesthetics. The cinematography and storyline make it feel more like a short film, and great thought has been put into casting and setting. Right from the beginning, the audience is intrigued by the subtitles, the foreign setting (most likely Montreal), and the complicated storyline that unravels. Taehyun makes sure to assert his maturity with the serious subject matter, his passionate acting, and the intimate moments he shares with his co-actor.

Taehyun is seen trying to win back a woman after what seems like a painful breakup. We see flashbacks of the happy couple juxtaposed with them in the present, tensely sitting at the table as Taehyun clutches a bouquet of flowers and plays with a ring on his finger, which seems to have a great deal of significance. We also see scenes of drunken arguments, unresolved fights, and simmering jealousy. 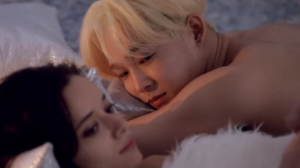 There is a brief moment where it seems as if the couple has reconciled, with the young woman crying as they embrace. However, this moment of reconciliation is brief as we learn that she has a new lover, with whom she is expecting a child (or, if you are to believe some theories, it is actually Taehyun’s child that the new lover mistakenly believes is his.) This plot twist is by far the most striking part of the MV, and makes it extremely memorable.

Taehyun uses the heavy subject matter as a way to prove his growing maturity and rebut those who have accused him of childlike behaviour in the past. The MV has succeeds in being genuinely touching, in line with Taeyang’s “Wedding Dress” or K.Will’s “Please Don’t,” and Taehyun is able to give “I’m Young” a greater impact with his acting.

The aesthetics of the MV also make it stand out. Taehyun’s shock blonde hair makes him a strong presence in the MV, and the female lead is also has unique, likeable features. The MV’s blueish-grey colour scheme adds to the sombre feel, and as a whole, the MV is also shot beautifully.

Through the song, Taehyun makes sure that he does not just display his maturity through the MV, but also expresses it through the lyrics and his singing. The opening lines are enough to give you goosebumps, thanks to Taehyun’s delivery. The lyrics reveal the fact that despite his best efforts, Taehyun can’t move on from the fractured relationship. Taehyun has made a point to write these lyrics himself, as well as be one of the composers for the song, as a way to again demonstrate his artistry. 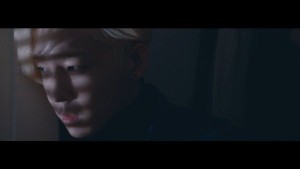 “I’m Young” is a memorable song with a strong and unique MV, and with it, Taehyun has succeeded in proving his maturity as a person and ability as a performer. The solo ties in strongly with the rest of EXIT: E, and once again sets WINNER apart as a classy group with a distinct look and sound.