After many promises, delays, teasing Instagram posts and press releases, 4Minute has finally returned this past week with “Hate” and their new album, Act.7. For this release, Cube not only did their best to push the “girl crush” concept for 4Minute, but they also called in some big names to aid with production and give the album a bit more flare.

Many fans were surprised to find out that internationally acclaimed DJ, Skrillex helped produce the title track “Hate.” Love him or hate him, there’s no denying that Skrillex is a well known and successful producer in the international music scene. Fans, Cube, and 4Minute alike new they would be taking a rather large creative risk with their new EDM-inspired title track. Unfortunately, it seems that the risk did not pay off with the bang they were hoping for. Instead, the track fizzles into a confusing mish-mash of sounds that polarizes listeners.

“Hate” kicks off deceptively nicely with Ga-yoon‘s sweet vocals and cinematic shots of veils and flowers. The bitterness of the lyrics increases with Hyuna‘s brief rap interlude followed by Ji-hyun. The first verse not only holds promise for a not-so-average break up song, but also a killer drop as each line gains momentum. When the anticipation can’t get much higher, So-hyun demands “leave me alone, leave me alone,” and then….

Is that a tuba? 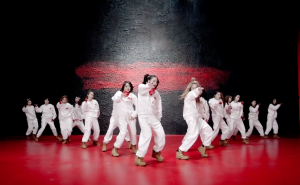 Yes, yes it is. Not only does the chorus of “Hate” come completely out of left field, but it also brings the entire marching band with it. The main focal point of the chorus is the chant of “I hate you” against the low-fi sound of a marching band warming up the brass section and Hyuna’s auto-tuned grunting.

That’s it? That’s the drop that all this teasing had lead up to? Where are the vocals? Where is the continuity? It’s so disorienting — and disappointing — that I can hardly remember the verse that led me to this dystopian pep-rally. If shock value is what they were going for, they certainly achieved that much.

Now, I know “Hate” is one of those songs that people will say takes a few listens to find a groove with. Fair enough, as that proved to be the case with Big Bang‘s summer jam “Bang Bang Bang” — a track I initially was completely disoriented by but came to appreciate. (I will never say love — but I will say that the drop in “Bang Bang” no longer feels out of place.) However, I have given “Hate” the benefit of multiple listens, and can say that — at least for me — there is no reconciling the chorus with the rest of the track.

This is really a shame because the verses are so well produced, and packed with just the right mix of emotion and build-up for something bigger. 4Minute has some wonderful vocal talents, and their voices mix surprisingly well with the little elements of trap and EDM that made their way into the verses. Even the chorus itself — however out of place — isn’t horrible. But it’s missing the actual members of 4Minute and feels too empty to take up so much of the song. Jamming the two pieces together is where the track falls incredibly short. There’s obviously so much production and talent behind the track, and I wonder how this became the final product. 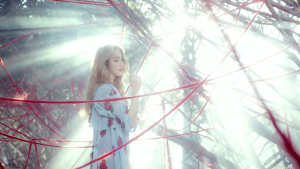 It’s clear that 4Minute is trying to mimic the success of last year’s “Crazy.” That’s 4Minute’s general tactic for comebacks: release one track with completely new sound, if it does well, come back months later with a track that follows the same successful formula. Just look at 2014’s inquisitive trio of “What’s Your Name?” and its follow-ups “Is it Poppin’?” and “Whatcha Doing Today?”

With the success of 2015’s “Crazy” it was only a matter of time before a sibling track appeared. For “Hate” 4Minute not only stuck with the single word title, semi-appropriated aesthetics, old brass sounds, but also the chant-style repetitive chorus. Unfortunately, “Hate” does little to build on what made “Crazy” successful, and throws fans into the opposing camps of ‘love it’ or ‘hate it.’

It’s not just the musicality of the chorus that causes “Hate” to disappoint, there’s also the jarring affect of the changing aesthetics. The intro scenes are filled with rich imagery of flowers, thorns, blindfolds, desert-scapes and lovely close-ups of the members. There are obvious symbols in the images that help build the emotion of the lyrics. But, much like with the track, all the clever imagery is abandoned during the chorus as the members don track suits and scowl at the camera. In each of the chorus shots, it looks like the members of 4Minute fell into an early 2000s Missy Elliot music video — a fact only heightened by Hyuna’s pig tails. 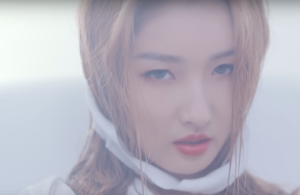 I’m all about 4Minute rocking the bad girl vibe — it’s part of what made “Crazy” so great for me. But when it comes to “Hate,” the aesthetics feel a little too forced (a little too appropriated) and I’m simply not convinced.

Despite my dislike of “Hate” overall, I still very much support what 4Minute is doing. They’re a girl group that rarely plays into the sexy/cute dichotomy; ignoring any assumption of the two being mutually exclusive identities. They’re always willing to charge forward with concepts that fall outside of the girl group box of cliches  — and sell them with remarkable vibrato and girl power. For refusing to polarize their own image, they deserve a round of applause. Unfortunately, when it comes to “Hate,” I’m just not buying it.