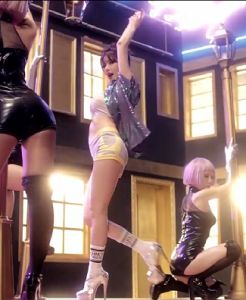 My honest first reaction to 4minute’s “Whatcha Doin’ Today?” was to wonder if this MV was about them parading around on drugs. Aside from a questionable scene where an item is ingested, the video involves the 5 ladies of 4minute hosting an eccentric party. It is an outrageous affair with each member showcasing how uninhibited they can be.

Brave Brothers helm the production on this track. It marks the third consecutive title track produced by Brave Brothers — as well as the third title track to pose a question — after “What’s My Name?” and “Is It Poppin?” The song boosts familiar Brave Brother synths along with a horn refrain present throughout the duration of the song. Hyuna and Jiyoon trade rap parts throughout the song and Gayoon carries the chorus. The lyrics are shallow with 4minute asking their interest about their plans today, plans for the weekend, showing your ‘lol face’, etc. However, the whole point of it all is about letting loose and having fun.

If the horns in the song intended to inject some sass and flavor to the track, the video is one major display for the male gaze. Cube Entertainment have always been exploiting Hyuna as the sexy one of the group, but in hopes of establishing a lasting personality for the other members, they push the boundaries in each member’s representation.

[youtube https://www.youtube.com/watch?v=4xLFxfXWDUk] The MV opens up with a low camera angled shot of Hyuna strutting along some lamp posts. Her female backup dancers in short dresses and purple wigs are staged precariously. The video has no reservations in alluding to whose attention this party is meant to capture. Also featuring some twerking before maknae Sohyun’s school hallway scene, the MV attempts to balance the overtly sexy with aegyo. Sohyun’s scenes feature her with ears and her hair in two buns. She is playfully cleaning in one scene while giving attitude to some guys in a hallway in another scene. It is an attempt to inject much needed comedy by exaggeration.

However, netizens have also been grumbling about the choice of shots in the MV. Of particular notice was a scene of Jiyoon in a bathroom stall with 6 other men. It was controversial because at the end of her verse, the camera placement emphasized her gyrating motions and subsequent crotch pop. It is all very in your face. The ‘softcore pore angle‘ often denounced for directing focus to areas deemed inappropriate is in full flight here. Otherwise, Jiyoon’s scenes seem to place her in relation to being one of the boys.

The other scene that drew the ire of the netizens was the aerial shots of Hyuna and her cleavage. Whilst she and her scantily clad backup dancers are lying around a pole sensually touching themselves, the camera angles only serve to further eroticize the girls. It’s a wonder this MV’s tone can remain lighthearted despite how sexualized the girls are conveyed as. 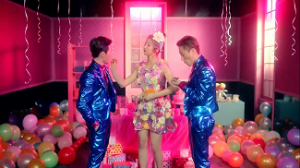 Aegyo is intermixed during Gayoon and Jihyun’s scenes. The ladies of 4minute give off puffed lips and large innocent eyes during a scene where they get their makeup and hair done. Amongst their sighs, Gayoon gives one of the purple headed stylists a tap on the rear. An intention to avert the male gaze to focus on the butts of the purple wigged females and draw to invoke amazement, there is no physical boundary.

Meanwhile, Jihyun’s shots involve her enjoying a lollipop in a pink colored room. She sings near a similarly colored cake as her male backup dancers’ heads grow in sync with the lyrics. Another scene to note is the inclusion of a male on male kiss. Jihyun gives two combative males some drugs candy before they suddenly change and start making out. This is not furthering any positive representation of homosexuality but rather playing off the matter as merely startling to witness. As the two males kiss, Jihyun’s lollipop drops from her shock.

The MV intends to be comedic, but incorporates a tangible shock factor in crafting a playful character for each member of 4minute. The supporting backup dancers and actors are a major component in the process. Their bodies not only become eroticized, but they also are often used liberally in comedic gags to establish the light-hearted tone.

Although the video attempts to showcase 4minute’s characters, it all feels very forced at times. The scenes where everyone in the room makes staccato movements feels all too indicative of what the video attempts to make of 4minute. The attempt at building a persona for each member comes across as too concocted and the message ultimately gets lost within the hodgepodge of sexualized scenes, aegyo expressions, and comedic gags. Overall, I’m sure the video accomplished its goal of eliciting shock and enticing the male gaze, but it doesn’t offer much depth or substance beyond that.  2.5/5