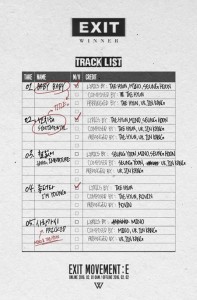 Fans have been waiting for almost 18 months for EXIT, WINNER‘s comeback, and on February 1, the first mini album finally dropped. Similar to Big Bang‘s MADE last year, EXIT is split into four mini albums, the first of which is E. It has five new songs, all of them composed and written by the members of WINNER themselves. It’s a strong comeback that maintains the same sound as their debut album and builds upon their strengths.

Each of the five songs focuses on the similar theme of loneliness and desire. The first three songs are musically upbeat, even if the content of the lyrics aren’t. Both “Baby Baby” and “Sentimental” revolve around the feeling of being lonely but not having anyone to help alleviate the loneliness. The chorus of “Baby Baby” expresses this sentiment with:

The lyrics to “Sentimental” are similar; they make several references to how frequently they want to reach out and find someone to keep them company. It’s interesting to have these kinds of lyrics paired with the upbeat and groovy arrangements, but it works quite well.

“Baby Baby” sounds very similar to “Kandi” by One eskimO; like “Kandi,” the lyrics are mournful and isolated, but the musical arrangement grooves beneath their sadness. “Sentimental” also pulls from old school sounds of Motown and elements of salsa for the chorus, creating a very danceable tune that doesn’t sound like every other dance song out there.

The last upbeat song is “Immature,” a rock inspired song about not wanting to grow up. It’s one of two songs that Taehyun didn’t write the lyrics or music for; instead, it’s a collaboration between Seungyoon, Mino, and Seunghoon. While the lyrics to “Baby Baby,” “Sentimental,” and “I’m Young” are more introspective, “Immature” is purely about wanting to have fun even if you’re an adult. During the chorus, Seungyoon and Taehyun sing,

The attitude is much more brash and confident than the other two songs, even in the moments where they express uncertainty about their behavior. They want to be young forever and don’t care if people think they’re being immature by wanting to pursue that. The arrangement works really well; having a driving drum beat and rough guitar be the main focus of the music fits the rebellious vibe they’re going for.

Personally, this might be my favorite song on the album. It brings your energy up, getting you excited for whatever you may be doing. It makes me feel like running through a crowded store like a kid, which is exactly what this song wants you to do. 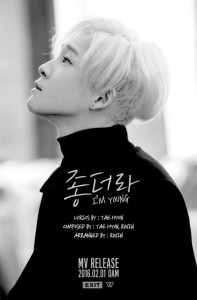 The final two songs are both mellow, starting with Taehyun’s heartbreaking solo song “I’m Young.” Both “I’m Young” and “Pricked” are all about unrequited love and the pain of realizing they will never love you back.

“I’m Young” is a ballad mourning the end of a relationship. With its minimal instrumentation, the listener can easily imagine Taehyun sitting at his keyboard after a break-up writing about how he isn’t ready to move on. Taehyun’s sweet tenor voice works well for this song — it’s the focal point, after all, and if it wasn’t heart wrenching the song wouldn’t work nearly as well. There are moments in the song where it feels like his voice is straining from trying to hit the higher notes, but it doesn’t diminish the pain he feels.

Similar to “I’m Young,” “Pricked” uses minimal instrumentation. The main instrument is an acoustic guitar with some orchestration to help emphasize moments within the song. While “I’m Young” is mournful, “Pricked” is more angry, bitter. It uses Mino’s and Taehyun’s voices well to express the bitterness that comes with the end of a relationship. Mino’s rough rapping plays off Taehyun’s voice, creating a really interesting sound when they sing together. My favorite moment in “Pricked” is when Mino sings his line, “I still say goodbye and my heart still cries”; it’s rare for some rappers to sing and the tone of his voice really works for the delivery.

Overall, EXIT: E is a strong first mini album for WINNER. It shows how they’ve grown in the past 18 months and is a good introduction for people who may be new to them. Hopefully the next three mini albums will build on this momentum and show us another side to the group that we haven’t seen yet while maintaining the sound fans have come to love.