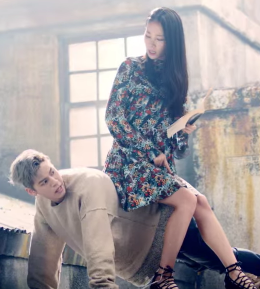 After nine months, Amuse Korea Entertainment has deemed it time for Cross Gene‘s return to K-pop. The group debuted in 2012 with Timeless: Begins and with a group that includes South Korean members, Chinese members and Japanese members. Active in both Japan and Korea, Cross Gene has made their comeback with an MV that starts off with an odd image of two jolly dancing robots and a female (Kim Jung-Min) tied up to a chair.

Just from the set up of the music video, it feels like a video game, where the princess has been captured and the knights must go save her. However, in this case, the princess is a noona and Cross Gene are not knights, but rebellious youths.

At first, Cross Gene are focused on arrogant posturing as they stride along the riverside, behaving like they are shooting a photo shoot rather than being on a rescue mission. They swagger through an obstacle with their guns ablaze, until they hit the first trap of a wall of punching boxing gloves.

This is where the music video makes a turn for the better. No longer do Cross Gene wear false pretenses, but instead reveal their true awkward selves. While Cross Gene believe themselves as capable saviors for the noona, they are woefully unprepared because they have brought only a basketball and a skateboard as weapons.

By the time they stumble into noona’s holding, she’s already taken down both her guards and had time to retrieve her badass leather jacket. Conclusion? She is not too be trifled with even if she is wearing a white dress – the typical symbol of innocence in K-pop MVs.

While K-pop music video history involves many videos of boys being smitten with an innocent lovely girl, Cross Gene takes the cliche and makes it their own. What makes Cross Gene’s MV so interesting is that during the flashbacks with noona, she is sitting on Sangmin, lecturing him as he does push-ups. The noona clearly holds the power in their relationship, but decides to wait out her kidnapping situation with her captors. 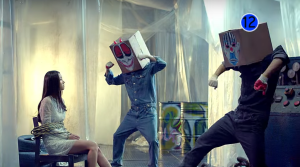 Perhaps, she was biding her time to attack, or maybe she was waiting for Cross Gene to save her. However, in the end, she lost patience and rescues herself. She didn’t need them to save her, competently or otherwise. It brings light to the whole noona – dongsaeng relationship. Instead of placing the noona on a pedestal, and seeing her as someone that needs to be taken care of, this noona demonstrates that she needs someone to treat her with respect, which is why she disciplines everyone at the end of the video.

With such a great concept, the only fault in this music video lies in the pacing. About a minute of the video is spent with Cross Gene’s preparation before they dash off to save their noona. Lots of close ups, face touching, grimaces, and slow motion running is used to achieve the effect of cool. However, Cross Gene’s attempts to appear charismatic fall on the line of not being quite ridiculous enough to be funny, but still too exaggerated to be considered purely attractive. While there is at least a minute of these cool scenes, there is little shown of the actual relationship between the noona and dongsaensg, which would have explained their motivation in saving her.

Whether or not she was interested in them romantically is unknown, nor is the depth of their relationship. All that is known is that they were not stalking her, which is a step up from many music videos. The most telling scene is in the music breakdown with Shin‘s dream sequence, where he gives noona his jacket, and she ruffles his hair affectionately. 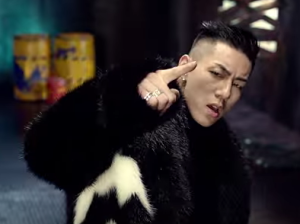 The two disparate ideas between what Cross Gene believes to be true and what is actually true is what makes the music video so intriguing, and simultaneously so disappointing. If more time was spent developing the characters of the boys or even a few extra scenes with noona, the music video would have been more complete as a story. The storyline of a noona and her dongsaeng with differing ideas of their relationship is infinitely more fascinating than watching the dongsaengs lost in a delusion of supposed strength and masculinity.

As for the song itself, it definitely has a childish nature, with the chanting giving off the vibe of nursery rhymes. The song also has interspersed hip hop influences, but the intensity in which the singers approach the lines is very laidback. Since the song had this type of vibe, the whole scenario of kidnapping and rushing to save noona doesn’t have high stakes. However, for all its faults with story development, “Noona, You” had great musical transitions. The slow down added a dreamy quality to Shin’s dream, and Casper‘s rap afterwards added an element of restrained masculinity that was not seen in any Cross Gene member’s acting.

“Noona, You” has great components in the breakdown and the rap, but sadly the rest of the song was a bit lackluster in comparison. Strewn together all the parts aren’t jarring, but they are not equal to the sum of their parts: it’s definitely listenable but a tad forgettable. However, all in all, a commendable effort by Cross Gene to give us a noona who is not a damsel in distress.

What did you think of the music video?