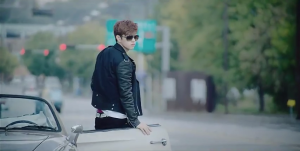 Multinational group Cross Gene has returned following the promotion of their Japanese movie ZEDD, casting aside their zombie slaying roles (and dancing, à la Thriller) to release their second Korean single, “I’m Not a Boy, Not Yet a Man”.

As the title suggests, the song is a noona serenade asking the intended love interest to leave her unhappy relationship and take a chance on her younger admirer. The music is standard pop fare and shares a consistent sound with the previous singles released by Cross Gene, though “I’m Not a Boy, Not Yet a Man” is less heavy-handed on the electronic edge found in “La-Di Da-Di” and “Amazing Lady”. The song is an easy listen, inoffensive, and fairly unremarkable as far as K-pop songs go.

Opening shots of the music video show the boys posed in front of an industrial steel wall and blue glass windows. Group shots are interspersed with individual scenes, and the solo shots are divided pretty equally between the six members. Shin is shown cruising through the streets in his car while Casper pounds away at the treadmill. Maknae Yong-seok emerges from the shower and preens at his shirtless reflection, Se-young sketches a woman’s portrait in a studio, and members Sang-min and Takuya both enter rooms, looking dapper with bookcases as a backdrop. 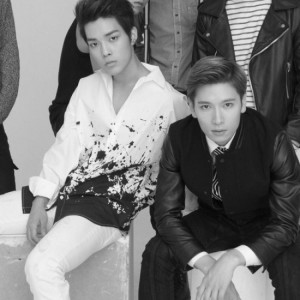 Each member’s scene highlights a quality of a man the members are trying to become, whether it is wealth (or perhaps, independence?), strength, physical attractiveness, artistic sense, or intelligence. The problem with these solo shots is that members do nothing else for the duration of the video — even Yongseok flexing for the mirror cannot remain interesting after three minutes and forty nine seconds. Ditto for Sangmin and his broody stare or Shin sitting on his car and lip syncing. The scenes just feel slightly unsatisfying, and a little more plot progression could have connected the shallow story line to the lyrics more clearly.

In this case, the presence of a love interest would have given the video some much-needed narrative. Even a simple text from the girl or a photo of her with her boyfriend on social media that the members stumble upon would have better explained the members’ motives in their pursuit of becoming a man.

At the end of the video, Seyoung leaves his easel, but it’s an ambiguous ending. Has he finished the drawing, or has he given up, signaling that he is still lacking in certain aspects and not yet a man? The other members give no other action, so it’s unclear on what note the video concludes. 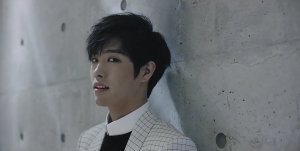 The group scenes have the boys clad in white suits with black undershirts, which alternate to black suits with white accents. In this case, the mix of black and white in the styling emphasize the situation being sung about, in which the members find themselves in between transitioning from their youthful innocence to a more mature, experienced character.

While none of the choreography is original or ground-breaking, the fake-strumming “point” move in the chorus fits with the electric guitar riffs found in the instrumental of the song.

“I’m Not a Boy, Not Yet a Man” portrays a subtle shift in identity for the group, moving away from the higher energy and club elements of their previous releases to bring a more understated sound. While the music video attempts to capture the desire to grow up and receive the believed benefits of maturity, it falls short just slightly, leaving the audience with a production that matches the song but fails to elevate it in meaning or memorability.