Is six the new magic number or something? Because this year has witnessed the birth of no less than six sextets debuting in the first six months alone, with boy groups being more common. And to join these ranks, new company Amuse Korea Entertainment offers up their first project Cross Gene. Cross Gene’s shtick is that group contains members from Korea, China and Japan — in fact, their agency is a Korea-based arm of Amuse Entertainment, a Japanese entertainment company. Cross Gene is taking the whole “international idol” concept of U-Kiss’ to the next level, but whether it pays of remains to be seen.

One thing that is to Cross Gene’s advantage is that most of their members have prior experience in entertainment: Korean and eldest member Shin was part of the cast of Bachelor’s Vegetable Store and is also currently starring in Hong Sisters drama Big (good job on the timing there, Amuse). He was also in Japanese TV drama RUN60 with fellow group member and Japan native Takuya, who is also known in Korea for his stint on Dream Team. Other members have also starred in CFs and the like, and second Korean member Sangmin (there is one other Korean member and two Chinese members) has previously been in a musical.

Thus far, I have learnt two things about Cross Gene: one, the members are from three different countries, and two, they’re good with cameras. But will this help them with their debut venture “La-Di-Da-Di?”

“La-Di-Da-Di” starts off like a generic electro-pop song, and pretty much stays that way for its duration. To be honest, Casper‘s (Chinese member #1) rap was not doing it for me, and the second he says “You make me go La-Di-Da-Di,” Cross Gene had all but lost me. Seriously, of all the onomatopoeia I could be coaxing from your vocal chords, I make you go “La-Di-Da-Di?” You know what else goes “La-Di-Da-Di(-Da)?” Frogs.

Needless to say, the boys faced a tough challenge in getting me to take them seriously again. 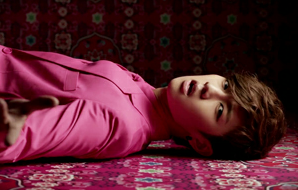 Shin in his pink suit and room of carpet did help me care about the video again, until they all decided to sit cross-legged, and dance while doing so. I appreciate Cross Gene for trying to do something different here, but the execution was not the best, and the choreography also simplistic. There were some great moves: the whole vertical-line based sequence in the second verse, the zombie dance in the second chorus and the knee-flapping in the first chorus was really cute, but otherwise, the dance was lacking in innovation and the boys were not able to make it look any better.

One of the things I did like was the styling of the sets. The different colours and sets for each member’s solo shots allowed for their easy identification. Takuya is in a light indigo suit surrounded by studio lights, Sangmin is in a green-tinged room with what appears to be a dirt floor and Yongseok (guess where he’s from) is backed by a wall of speakers. Using different sets allows the members to create personas for themselves as well; Shin seemed sensuous, JG came across as beastly and Takuya was Mr. Cool in his blue suit, though this was the only time I could read emotion from the members — the group scenes felt almost robotic at times, as though they were concentrating too much on the dance or making faces to the camera to allow for more natural emoting; I would chalk this up to lack of experience, but wasn’t prior experience one of the things the group was spruiking? The only other complaint visually would be with JG — his styling was the least appealing of the members, and the microphone set up, though used here to allude to Sangmin’s vocalist role, was much too reminiscent of the microphones Miryo had in Brown Eyed Girls‘ “Sixth Sense” MV.

Although the song is very run-of-the-mill, the amount of autotune in use is worrying and the English leaves something to be desired, but at least the melody doesn’t bore, with the middle-eight being the highlight. The lyrics are actually quite decent, too, save for all the references to the DJ (the DJ doesn’t care, they just want to get paid at the end of their set, OK?) and, of course, the “La-Di-Da-Di–” or should it be “Ra-Di-Da-Di?” To be honest, I could roll with that, it doesn’t remind me of frogs.

So while there were some things that were executed sufficiently well, shortcomings in other aspects made this a largely underwhelming experience. Cross Gene held a live showcase performing songs off their debut mini-album Timeless: Begins, and it seems that they can sing live, though that dance is still, for the most part, ordinary. They may be able to get everyone’s attention with Shin’s involvement in Big for now, but it remains to be seen how far that will take them.

Though for the most part unoriginal and almost lifeless, little details here and there redeemed the song somewhat, resulting in a score of 2.3 out of 5 for this MV.

What are your thoughts on Cross Gene? It’s early days, but do you think they can make the international concept work for them? Leave your thoughts below!