Behind the Scenes: Reusing Sets and Props 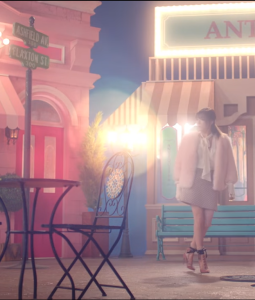 It costs entertainment companies quite a bit of money to make music videos. They have to hire directors, a camera crew, lighting technicians, wardrobe, make-up artists, and the list goes on. We can’t expect them to construct new sets and build new props every single time their artists promote a new song. Thus, companies often rent props and sets that are already built. It’s a practical and affordable solution, but it seems that these days, entertainment companies are renting their props and sets from the exact same place.

When watching a music video that takes place on the side of a road, have you ever read the street sign? There’s a good chance that your idol is standing by Flaxton St. and sometimes even the corner of Flaxton St. and Ashfield Ave. These particular street signs have been featured many times in videos like 2NE1‘s “Lonely,” FT Island‘s “Hello Hello,” and recently, TaeTiSeo‘s “Dear Santa.” It seems like Flaxton St. is a popular destination for K-pop idols.

Whereas street signs are used more as set dressing and are a little harder to notice, entire sets are a different story. The music video for Girls’ Day‘s “Don’t Forget Me” features a set that was also used in Red Velvet‘s “Be Natural,” Playback‘s “Playback,” Hello Venus‘s “I’m Ill,” and Laboum‘s “What About You?” just to name a few. You can see the infamous two windows in the background in all of these videos. Most of them do try to differentiate themselves by shooting at different angles or adding curtains, chairs, lights and other random props.

The set looks like it offers a lot in terms of production which is probably the reason it’s used so much. The big windows are perfect for lighting with their position, and the curtains ability to diffuse the lights are also another benefit. The big empty space allows for set designers to dress it any way they want and create a certain tone based on the song.

Another set often used is the one that features in Hyorin‘s “One Way Love.” This set has been used in Hyunseung‘s “Ma First,” Cross Gene‘s “Amazing Bad Lady,” Mamamoo‘s “Piano Man,” and NS Yoon-G‘s “Wifey.” This set is very unique because it essentially offers a set within a set. Music videos shot here often switch back and forth between shots from inside and out.

It’s always interesting to watch videos shot at this particular set because of the different shooting locations that are available within the set. Like the previous set, this also has a lot of windows giving cinematographers more options for lighting which is probably why this set is so popular.

As long as these music videos are able to do something that differentiates themselves from the rest, reusing sets shouldn’t be a big problem. It’s actually kind of fun and interesting watching BTS wreaking havoc through the same tunnel that Taeyang drove in or watching Hani getting dumped at the same spot where Hyoyeon first debuted. Situations like these are perfect examples of how to re-purpose a set while still doing something different with it. Some of these sets and street signs have almost become a staple in K-pop. So the next time you watch a music video, keep your eye out for them.

Did you guys notice these sets were being reused? Does it affect your enjoyment of the music video?