Playback Make a Debut in Rose with "Playback" 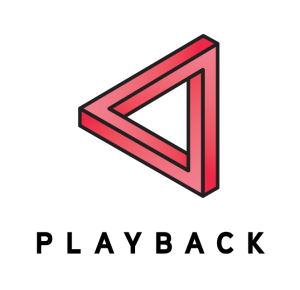 A particularly roseate flower in the likeness of four charming singers has bloomed among the hustle and bustle of comebacks this summer! June 25th heralded the debut of CJ Entertainment’s chic and fun-loving girl group, Playback. The members of Playback include Woolim, Hayoung, Yena, and Soyun. They officially entered the K-pop scene with a live performance of their first digital single self-titled “Playback” on M! Countdown and subsequently left a unique and distinct impression in their wake. The earliest semblance of this girl group appeared before me in the image of a proto-Playback cover of Ariana Grande’s “Problem” by leader and maknae Woolim when she was a JYP trainee on Mnet’s I See Your Voice. Before a panel of idols and television personalities, she performed the famous song and blew everyone away, including myself.

For someone who at that time hadn’t even entered the K-pop scene’s glittery throng of I-need-to-stand-out, her enunciation, vigour and impressive vocals easily secured her potential and popularity. Even though she is quite good, I think that her official debut, eventual experience with the mechanics of idolhoood, vocal training and general perseverance will go a long way in adding gravity and soul to her singing skills. Let me say that Playback’s “Playback” is recognizably original; imbued in the spirit of youth and dancing upon tones of blush, these girls have some serious potential. 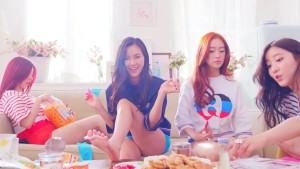 The MV begins in the expected generic manner with arrays of pastel and primary colors with pretty fruits, but what makes it capable of fineness is the way the simplicity of the setting, saturation balance, and the focus balance the story the MV is attempting to deliver (or the subjective portrayal of the song) with the choreography (or objective portrayal of the song). In this light, our eyes are not overwhelmed by too much color and hype in the surroundings, and our attention is fully directed towards the girls. The color contrast in the choreography scene is poised ingeniously through the quietness their outfits and the vivacity of their fancy footwear.

Rapper Hayoung is the first to welcome us to the song with her zesty rap, which in range and timbre is reminiscent of the style of Sistar’s Bora. Her rap plunges us into the constancy of the chorus, which anchors the entire song and ties the tongue in a plait of catchiness and amusement. The rap lyrics are simple but function as an impetus, possibly as teasing remarks or advice from an omniscient voice. From an overarching stance they serve as primers for the unraveling of more subjective lyrics later on.

What are the girls doing? They’re just talking about boys

What’s the use of pretending?

Just be honest Now with him, hit the playback

The dynamics of “Playback” are fluidly tasteful as they shift from Woolim’s powerful and resonant vocals to Yena’s soft and precise vocals, both mingling in harmony and then diverging to match concisely with specific rhythms while maintaining their own vocal qualities. “Playback” in this way evenly allots each member her own definite set of lyrics and stills, and through each segment we hear the uniqueness of each member.

Although Soyun is a sub-vocalist who primarily contributes to the chorus and general harmony of the song, her stature as main dancer elevates her involvement in “Playback.” She is seen as the head in choreography scenes, leading the other members with her enticing yet lovely dance moves and driving Playback towards not only vocal skill but also that which must accompany it: the ability to project skill through dance. 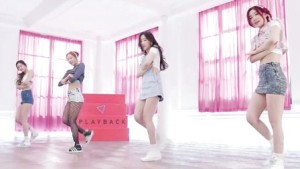 Thus “Playback,” through the voice of four pretty girls portrays a subjective story of a girl who is confused about whether she wants to stay with a particular boy (who is apparently quite enamoured). In the end, the lovely lady can’t help but want to “hit the playback” and experience love, youth, beauty and joy with the same vivacity once more. The girls of Playback have made a solid debut with an enjoyable and catchy song and MV amidst the furor of comebacks this month; this is all because they seem to prioritize and value one very vital thing – balance. There is balance in their sound, style, and steps. Due to this it seems that I will be playing back Playback’s “Playback” from now on.