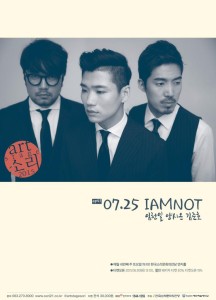 IAMNOT burst onto the music scene with a snarl and a sneer. There’s no pretty pop in the swirl of this music. It’s rough and sexy, a slice of 16-bar blues wedged between a rock guitar riff sprinkled with the warped cadence of a synthesizer and that crunch of a voice on lead singer and guitarist Lim Heon-il. The band slapped me in the face with their brand of blues, and I haven’t been able to see straight since.

Their five-song debut EP boldly declares whoami, a challenge to anyone coming to their music expecting, I don’t know, maybe something polished or pretty. The band’s name lets you know already: whatever you think I am, you’re sorely mistaken, darling. And whoami pours a bit of salt in the wound with an opening track that sets you up for some “Brand New Blues.”

A mixture of the whiskey and smoke of blues and the rage and riot of rock music, IAMNOT manages to integrate some real feeling into a genre I didn’t even know South Korea had the balls to try. Yes, I should’ve expected it, considering the growl of harder-edged rock slinking on the periphery of the country’s music scene. However, it never occurred to me that there were musicians in SK who had an actual competency for a genre steeped in both jazz and the Negro Spiritual. It’s not something I even considered. Yes, there’s an over twenty-year history of hip-hop, but blues is a different beast altogether, and IAMNOT made one hell of a go of it when they decided to create some of the grimy stuff. 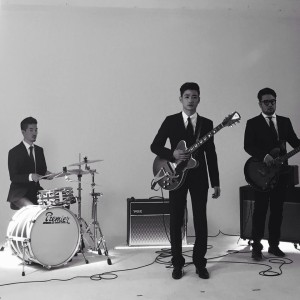 That’s not to say every ounce of the band is tied up in the ache and yearn of the genre (track “HEIYHEIY” from whoami and “LALALA” from their latest release, Hold the Night); however, their foundations are very much steeped in the traditional rock, sway, repeat of the blues. Though only two tracks, Hold the Night showcased the tenderness of the blues, the ability to blend what’s both heartbreaking and incredibly poignant about the genre. We get track “Hold Me,” a song that’s a touching bit of soul nestled between some of the grit, exploding into a three-part harmony that pours sweetness into the soul and brings out the lover in you.

However, when you sit back and just listen to where the band’s coming from, there’s a crunch of bone in there, a piece of down-home Tennessee swing that gets the body moving. “PSYCHO” from their debut release goes from the boot stomp of a roadhouse to the crude explosion of rock music.

Even further than that, people forget blues is an incredibly sexy genre, music that’s more than just about the lament and whine of a forlorn lover. “Cut,” the track that introduced me to the band, bleeds, aches, and explodes with the brightness of Heon-il’s voice, the pulsating pop and snare of Kim Junho’s drums, and the underbelly of Yang Si-on’s bass. It’s a song so deliciously dipped in sin it makes you want to go out and find someone to wrap yourself around. Sweaty, dirty, sensual in a way that does more than caresses the skin; it burrows underneath it and infects the blood, putting images of long, hard tumbles at the front of your mind.

IAMNOT is a band to be reckoned with. Though it took them some time to get here, their music is the kind that never leaves you. It sort of sticks to the bones like a good meal and jostles the mind like a really good whiskey. Whenever you find yourself in need of a good bit of soul rocking, IAMNOT is the band you should go to for the good stuff.