Exo Wants to "Sing for You" In Their Latest Winter EP 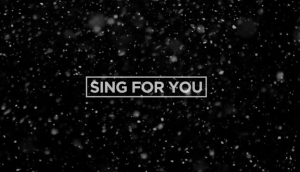 Winter is upon us, and so is another Exo comeback. The now nine-member boy group is back with their second “special” winter mini album, Sing for You.

As I’ve already made clear, I’m a huge fan of holiday releases. 2013’s Miracles in December was an unanticipated favorite and SM already almost made my winter this year with TaeTiSeo‘s “Dear Santa.” As such, I’ve come to expect a lot from SM during the winter seasons.

“Sing for You” — much like last year’s “December 2014, The Winter’s Tale”–  is another winter release filled with feelings and not a lot of winter anything. It’s like SM thinks Exo is only capable of depth when it’s cold out or something. Feelings are nice, and the vocals are lovely, but I’m still waiting for the nine members of Exo to don Santa hats and reindeer noses while they frolic in the snow. Where’s your Christmas spirit, SM? Who broke your heart and shattered all the joy for the holiday season?

“Sing for You” is Exo stripped down to the basics: just an acoustic guitar and the member’s vocals. The song begins with a simple count-in against the guitar before the vocals start, making it feel exactly like the open-mic confession the track tells the story of:

With my old guitar
I’ll take all the confessions I couldn’t say
All the things I swallowed inside
And tell you right now as if I made it into a song
Just listen, I’ll sing for you

The simplicity of the arrangement and production is a refreshing change of pace for a group whose tracks — even the slower ballads like “Miracles in December” and “Baby Don’t Cry” — are often filled with multiple production effects. The result of the change is an intimate experience that relies solely on the vocal delivery of the members. Luckily, Exo more than delivers on that front; we can hear the vibrato in Chen‘s voice, the subtle dynamics of Baekhyun‘s confession of feelings, D.O‘s apprehension and nervousness as he reveals his crush. Even Chanyeol finally gets to show off his low, soothing vocals on a title track. Ethereal harmonies join in occasionally to add depth to the lead vocals, and are especially nice in the final chorus. 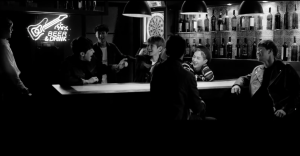 It’s not an exciting song by any means, but it’s nice to see SM take a step back from the hype-group image they’ve been forcing on Exo recently. They’re a group of talented young men, the majority of whom sing far better than they bounce around a stage shouting “E-X-O.” So, thank you, SM for letting them relax and just sing, for once.

Both the song and the MV have surprising — but contrasting — emotional resonances. “Sing for You” is a song about confessing feelings, while the MV tells a somber tale of love, loss, friendship… and deep space. It’s a bit of a discrepancy, but that seems to be SM’s latest trend with Exo non-box MVs.

It’s not just the black and white filming and angsty shots of snow that cause the MV to pack an emotional punch, but the way the scenes are all intricately woven together within the narrative. The MV is filled with contrasting shots of the Exo members enjoying themselves together and then brooding alone in the same spaces. In each scene the Exo members manage to communicate the pain of nostalgia and loss; whether it be from the desperation in Chanyeol and Suho‘s faces while they’re punching each other silly, Kai‘s destruction of his apartment, or D.O sitting alone in the car, staring forlornly into the rear view mirror. 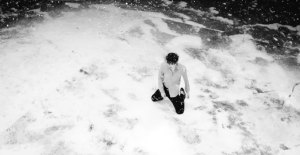 Kai also performs a swooping dance sequence in the snow that is played against Chanyeol and Suho’s fist fight. I can tolerate a lot of criticisms of Exo, but I have a serious bone to pick with anyone who doubts Kai’s dance abilities. The way he mirrors the fight, with his shoulders hung and face pained, captures perfectly the emotions of the scene;  longing and regret pour from the movements of his body, and his solo is easily the most moving moment of the MV.

While the members are sulking around in the snow, Sehun apparently decided to travel back to Exo planet for the holidays. Ground control to Major Oh, what are you doing in space… with a whale no less? Strangely enough, this isn’t the first time the (space) whale trope has popped up in K-pop, but it might be the most random. I know there have been a lot of fan interpretations, and while the tale of a lonely whale does in some (small) way vibe with the theme of the MV, the visuals just aren’t cohesive, and I actually giggled a little on first viewing — which I don’t think was SM’s intention. 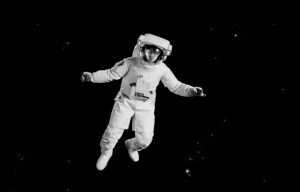 Even with the aquatic galaxy far, far away, there’s an overwhelming sense of loss and isolation that fills the MV. But, most importantly, there’s still a small glimmer of hope in the MV’s message. As a winter release, perhaps Exo is trying to remind us to appreciate what we have, look back on what we’ve lost and encouraging us to face whatever the new year may bring.

The special release does not end with the title track, though. “Sing for You” is also joined by four new singles on the EP. The Sing for You mini follows a similar path of Exo’s previous Christmas EP, Miracles in December: It starts off a little slow and sad but ends on a high note (in outer space, because why not). Though the flow is similar, the tracks of Sing for You convey an entirely different mood: one of longing and not celebration.

“Unfair,” is the second title track that technically kicks off the album. Amid the funky back track and sweet vocals, the members sing about a girl who is desirable to them, no matter what she does.

You’re unfair
Are you being selfish? (stop it)
Your eyes, your nose, your lips
Are they still going to be pretty no matter how much I look?
You’re unfair
Just stop right there
You’re dangerous, dangerous, take it slow

“Unfair” makes for an appropriate opener thematically, as Sing for You is all about pining. It serves as a nice, upbeat introduction to the emotional core of the album, as the members notice a girl who is lovely in every way and want to be close with her. The instrumentals are playful, just like the lyrics. Musically and arrangement wise, it’s reminiscent of their last single “Love Me Right,” but considerably more laid back in execution — which also feels more appropriate for a winter B side.

By the time the mini progresses to “Girl x Friend” (following the title “Sing for You”) Exo has pined for a girl and confessed in their own understated way. “Girl x Friend” then continues with the mini’s theme by exploring the long term struggle of being just a friend to the object of their affection.

“Girl x Friend” has one of the most balanced vocal arrangements on the album. Both verses kick off with a rap portion before the vocals come in and harmonize alongside Chanyeol. Then in the chorus, less present members like Sehun and Kai take up the lower echoes while the main vocals are given a chance to let loose vocally: Chen and D.O’s ad-libs are particularly sweet, while Baekhyun gets the high note you know he’d been longing for for the entire album in the bridge. It’s a refreshing change that makes for a pleasant listen.

“On the Snow” is actually the only winter-themed track on the entire mini. Exo slows things down a bit for this number, as they follow the path of (lost) love through metaphoric footprints in the snow. It’s a cute metaphor, if not a little stalker-ish. The instrumentals, though toned down, keep with the mood set by “Unfair” and “Girl x Friend,” as the member’s coo through the chorus with lots of “oohs” and promises of a bright future.

“On the Snow” would make a logical conclusion to the album, as they have found their love and plan to keep it. But, alas, SM just had to throw in some product placement (as if the world is not being inundated with Star Wars advertising already).

Thus, the mini concludes with a neon bang, i.e. the Star Wars collaboration dubstep track “Lightsaber.” I’m not even going to pretend the track is on the album for any reason other than SM needed a place to put it. I’m half convinced the reason they blasted Sehun off into outer space in the “Sing for You” MV was for some sad attempt for a tie-in (wrong franchise, buddy). Space, whales, lightsabers: it’s an eight year old’s Christmas dream. But what is it doing on this album? 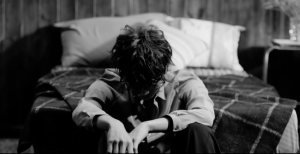 Overall, with the exception of “Lightsaber,” Sing for You makes for an appropriate mini to close the year with; there’s a little nostalgia, a lot of pining, but an overall hopeful tone set for the new year. As far as Exo winter releases go, Sing for You does feel a little weaker than it’s predecessor musically, but thematically I’d say it surpasses most of Exo’s previous albums. Also, in terms of title tracks, “Sing for You” is much more showing of Exo’s abilities than “Miracles in December” which was only performed by the lead vocals.

As an Exo-L, I like the Sing for You release. Maybe I even love it a little — if only for all the whale puns I’ll be able to make until the next comeback. What I don’t love is that SM insisted on releasing individual member covers in both Korean and Chinese versions for a mini album. Honestly, SM, just how dry are you trying to milk your fans? I was happy to learn that some of the proceeds will go to UNICEF, but it’s a strong enough release (with a fanbase backing it) to let the album sales speak for themselves. Please, SM, stop this gimmick of gotta catch ’em all just to turn a profit before the fiscal year closes.

Readers, how are you liking “Sing for You”? What’s your take on space whale?