Lovelyz Keeps It Simple in "For You" 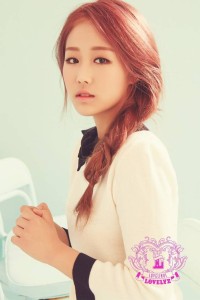 Debuting in late 2014, Lovelyz has had to deal with a scandal right before their debut, and another round of hateful comments when Jisoo joined with their last release, Lovelyz8. “For You” is their newest release and caps off the year for the girls from Woollim Entertainment.

The group in known for their sweet sound – in vocals, in harmonies and in rhythm. This is also accompanied with deceptively sharp choreography that may look simple, but in their synchronization and in the ease of their execution, they achieve a strength in their dances that are easily overlooked.  This is easily seen in their debut, with “Candy Jelly Love” being such an easy to remember song (and a favorite of mine). Their sweet sound is a strength but it can also be a deterrent to casual listeners who want more vocals from a group that has proven time and time again that their vocals surpass what has been given to them.

“For You” as an MV is not as busy as their previous releases. In fact, this is probably the most beautiful and aesthetically pleasing music videos not just from Lovelyz, but from Woollim’s idols for the year. “For You” is a pleasant change of pace for the female group. Instead of a schoolgirl concept that is common in their main releases, “For You” is a change in that they are now wearing normally worn clothes, while being age appropriate. 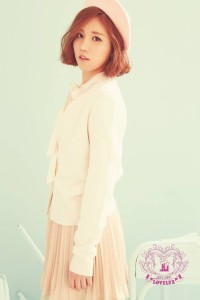 The music video is quite simple. For the whole duration, we see all the members smiling and going about, doing things you can easily imagine any teenager their age doing. It is all set in a color tone that is pleasing to the eye, without any random shifts in scenes. It is, simply put, a pleasing aesthetic.

During the music video, we also see the girls taking polaroid pictures and putting them in jars. We are left to assume that it is for their keeping, for the future. But as the music video draws to a close, we see Jiae delivering the box filled with memories in jars to someone in an apartment building. There is a slow reveal and we see another female, who takes it and opens it inside the apartment. We don’t know why the female is stuck inside, but the thought is a touching one. It is friends making memories together then taking the time to share it with someone who cannot be there, and we are left to assume that the female is also a dear friend of theirs.

This all connects with the lyrics, which talk of helping a friend who is feeling sad.

Had a long day?
I see a bit of sadness
Let today pass and tomorrow come
I’ll make you happy
In times I wanted to cry
I knew you’d come and hug me
Now I’ll be the one holding your hand
Look at me and smile 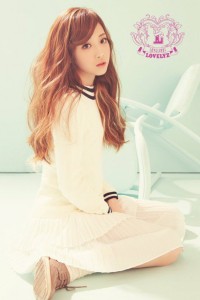 The song itself is a satisfying experience. Is it the best amongst the newest releases? No, but it is refreshing. It is not a ballad or a heartfelt tune that is usually released in winter. Instead, it is an almost calm yet uplifting song. For a Lovelyz main release, it is a change, albeit a minute change. The arrangement and the way the song is structured allows for more of Lovelyz’ vocals to shine. There is also room for the different vocal tones to be highlighted and differentiated. Even Jiae got lines that are somewhere near her range!

Even with these changes, it retains the sound that Lovelyz usually has. It shows a slow maturity, something that Woollim has, overall, been very good at if one looks at Infinite‘s discography. Infinite was allowed to slowly grow and mature, all while retaining the sound they are known for. It seems that this is the same plan Woollim has for their first female group, and it is a commendable one.

Hopefully, these promising minutiae changes continues and helps Lovelyz build a strong discography. With every release, there is more room for the vocalists to show their ranges and skills, and Lovelyz does have the vocal power to do more.

A pleasant change from the seasonal ballads, Lovelyz’ “For You” is definitely worth the listen, if you haven’t yet.