VIXX Compromises With "Chained Up"

VIXX‘s hallmark has been its darker concepts: “On and On,” “Hyde,” “Voodoo Doll” and “Error” have left their mark and gained the group many fans. Even I, who dismissed the group after their debut with “Super Hero,” fell for the sextet after “On and On.” After the lighter “Love Equation,” VIXX returns to the dark side with “Chained Up.” Despite “Rock Ur Body” and “G.R.8.U” being fun ditties, I prefer the darker side of VIXX and was really looking forward to the concept.

When I saw the orange chokers (or collars) in the image teasers, the sinister rooms in the MV ‘pre-teaser,’ and the mysterious woman in the MV teaser, I couldn’t help but joke about how I was really looking forward to “Mirotic Pt II.” And while we  — spoiler alert — don’t get to see Leo‘s veins bulge as he frees himself from a cliff face, VIXX’s “Chained Up” MV still brings some sensuality to their newest single.

This sensuality is mainly found in the music and cinematography. The aesthetics are top notch, thanks to the beautiful sets and cinematography. We start in an abandoned concrete building, the members walking through as a mysterious woman watches from afar. Soon, the members move indoors and retreat within themselves, before eventually finding their way back out to nature, and thus paradise.

These individual shots are just gorgeous: the way the pink and blue lights catch N‘s skin; the cold chains melding with Leo’s blond hair; Ravi‘s silhouette against the lit-up plastic; and — my favourite — Ken ensconced in a mass of flowers. Unfortunately, Hongbin‘s flooded bedroom and Hyuk‘s standalone stairs failed to impress as much. 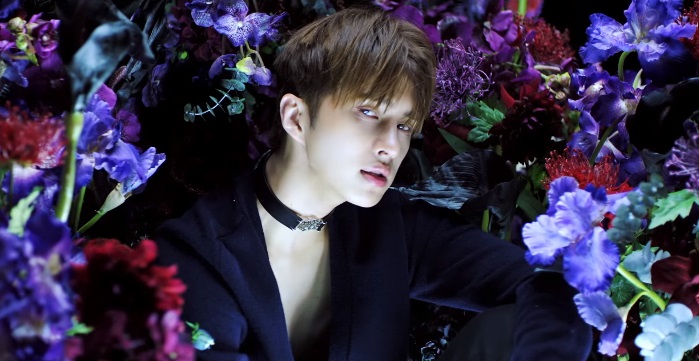 Unlike VIXX’s previous dark concepts, “Chained Up” is smoother, softer, and a touch slower; and thus more seductive. Hongbin and Hyuk also have more lines, with Hongbin’s low register creating the base on which VIXX builds up to the climax of the chorus. The chorus focuses more on melody than power, replacing Leo’s power notes with “na na na”s that roll off the tongue. Even Ravi dials back his usual intensity.

It is a strange feeling, though, because this said intensity, exhibited by all members, has been a hallmark of VIXX’s darker concepts. With a move away from that kind of strength, VIXX loses some of what makes them unique. “Chained Up” is not the sound I expected from VIXX at all. But, thanks to the members’ distinct vocals, it is still recognizable as a VIXX song.

Where VIXX really loses its uniqueness is in the dance. Ian Eastwood (who has worked with Taemin in the past) worked with VIXX’s usual choreographers, Nana School, to create the “Chained Up” routine. But despite bringing in a relatively big name, the end result is of an uninspired dance that lacks in execution.

VIXX specializes in punchy movements and dynamic formations; the group’s dances are like pieces of a jigsaw puzzle falling into place. The “Chained Up” choreography, though, relies more on subtlety and matching movements. These elements fit well with the song, but they are not what VIXX is known for. This mismatch drags the dance performance down. In the dance cuts of the MV, VIXX looks too tense; and the lack of contrast between the members and the set (using a white-based set with white outfits is a glaring error) does little to help. 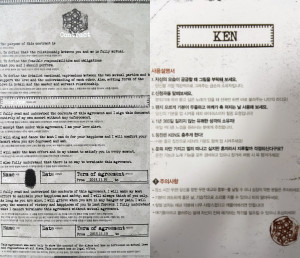 And that control is what gives us a MV that is sensual without being sexed up. Where “Mirotic” had gonads exploding from the shirtlessness and pelvic thrusting, “Chained Up” makes hearts thud with body rolls and intense stares (helloooo, Hongbin). But “Chained Up” also ends up being a lot less dark than is usual for VIXX. Sure, it’s nice that we don’t have to sit through over-dramatic and violent moments like members stabbing each other or choking women, but when the most sinister aspect of the MV, visually, is an almost unseen mistress and a few seconds of Hongbin’s serial killer glare, I have to admit I feel a bit let down.

This end result may have muted the original concept, and the attempts to be more public-friendly dulled the delivery. But “Chained Up” still gives us appealing visuals and a hummable tune, making for a decent, if not amazing, comeback.