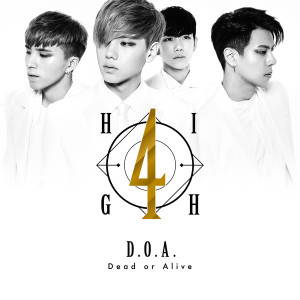 Five months after the release of their charmingly candy-coated single “Baby Boy,” idol group High4 has reappeared on the K-pop scene with a single released through N.A.P Entertainment’s official YouTube channel. Titled “D.O.A.” (Dead or Alive), the single follows up the silvery gloom of Halloween perfectly with its somber pen-and-ink aesthetic while showing us a High4 that has matured in both sound and sophistication.

That being said, High4’s succession from the persistent pretty-boy concept in “Baby Boy” to the dark phantom concept projected in “D.O.A” exemplifies their versatility and leaves us curious as to whether they will dip in to light or dark for their next release and how artistically they will do it; in the meantime, the titular reference in “D.O.A” emphasizes a frenzied desperation that harkens back to History’s “Might Just Die” but retains an aura of subtlety that shows off High4’s poise: the elusive religious symbolism appearing in the MV poses an ingenious metaphor and the harmoniousness of the song lyrics make impeccable sense. In “D.O.A” I see the highest rate of success possible for High4 so far.

In the prelude of “D.O.A” we are drawn into cinematography decorated by visuals of onyx and smoke, a white angel figurine facing its demise at the hands of a burning match and a snapshot of all High4 members lamenting an undesirable happening. Myung-han declares the first verse of the song passionately with his youthful falsetto whilst claiming craziness and near-death emotiveness, and rapper Young-jun looks dreadfully fantastic with ash-colored bangs draping his eyes. Following the expressiveness of the first verse which dually functions as the chorus and a husky yet brief second verse from Sung-gu, Young-jun’s gravely rap is delivered cleanly and conveys a critical message that backs up the burning of the two religious motifs (the angel and the crown of thorns) in the procession of the MV:

A kiss of the devil for a short moment

Why did you take away my heart?

Both angel’s wings are broken

They dropped down to the bottom

In essence, the angel and the crown of thorns are two biblical allusions used to symbolize the purity and selflessness High4’s love interest once possessed, as she swept them of their feet with her once goodness. Gradually as their relationship began deteriorating High4 felt entrapped and driven mad by the love of their once angel; she is heavenly in their memories but slips into a devilish persona in reality and torments them to the point of desiring death in order to end to their agony. The angel has fallen, her wings are broken and she has become an antagonist from the underworld as she has “dropped down to the bottom.” While on Earth, the fallen angel plagues them with tempestuousness. This sends High4 into a cycle of passionate misery that shoves insanity, loss of control, regret and suicide upon them.

When Alex enters the fourth verse with his reactionary rap, the song takes a turn into complexity as the musicality neatly overlaps with the morale. His rap illustrates the influence of the fallen angel’s love on High4 by underscoring ideas of being captivated, frantically wanting to be hers, the feeling of the body starting to burn and an impending punishment coming down upon them. Gradually High4 are being overtaken by their inability to forget the fallen angel and the desire to have her love. Thus, they border the crux of not only a fiery death in the underworld but also of never regretting the course of their actions and the love they have finally reclaimed. 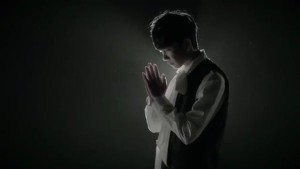 The focal point of the cinematography manifests in the beautiful Hebrew letters painted onto the walls behind the members of HIGH4 as they meander and mediate on them. We are accosted by the prominence of the Hebrew lettering in a way makes me wonder what sort of relation it has to the various Christian motifs in “D.O.A.”

In essence the inclusion of the lettering fuses together with the Christian motifs of the burning angel and crown of thorns as if to say that both religions carry the same idea in regards to angels and heaven and devils and hell. Here I sense a disconnect, a result of taking creative liberty in the name of art while overlooking the actual depth each of the motifs relay religiously and how crucially different they are. If the MV had focused more on utilizing the intelligent Christian motifs and not throwing in some pretty Hebrew lettering (commonly associated with Judaism) for the sake of artistic distinction, we would not get the impression that both religions are the same and subsequently less people would be offended.

Getting back to the rest of the MV where things were done right, Sung-gu’s vocals radiate as he sings the bridge of the song and resolves to have the fallen angel come back to them and revert back to her original goodness no matter what. His verse is perhaps the most critical verse in the song as it marks an abrupt albeit temporary shift in HIGH4’s tone after all of the languor and mourning.

Come back, come back

You decide: Dead or Alive 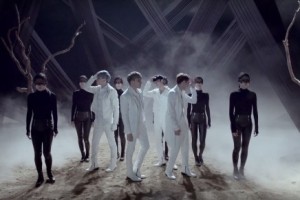 The pinnacle of this apparent proposal rests on the idea that High4 has begun to acknowledge their mistakes in light of the break up and that the majority of their pain is a self-administered poison that approached them in the form of a faultless love. The change in perspective is evident when Alex and Young-jun rap about being “all in” and thus completely dedicated to an “unconditional race” of loving the fallen angel or dying for her.

At this point the song highlights an overarching adjustment in tone – High4 has submitted to the fallen angel and are willing to suffer madness and instability as long as she comes back to them. Therefore, the “dead or alive” petition is fulfilled because the members decide to pursue her while she torments them with promises of return or die for her if she doesn’t return. Either way, they will have her in the end.

I would recommend High4’s “D.O.A.” (Dead or Alive) to anyone looking for an artistic rendition of a classical idea that creatively spins a generic story of lost love into a transformative tragedy. This song is definitely a testament to High4’s versatility, ingenuity, and originality as an idol group – I’m looking forward to more from them!

Readers, what is your interpretation of “D.O.A.” (Dead or Alive)?