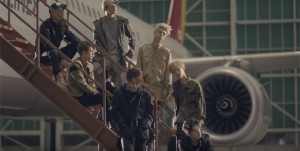 Since Who is Next: Win and Mix and Match, fans have been waiting since January for a certain seven member group to debut. YG Entertainment followers know by now that even if numerous dates are announced, a debut or comeback isn’t solid unless there are teaser pictures or videos on Yang Hyun Suk‘s Instragram timeline. Nine months later, iKON is finally here and are showcasing their talents. The third song in iKON’s release is “Airplane”, the fifth track on their debut half album entitled Welcome Back. The boys have found the “My Type” girl, showed off their “Rhythm Ta,” and now are remorseful that she’s leaving them for good and there’s nothing they can do to stop her from getting on the “Airplane”. They’re pleading and asking their lover to stay and also giving excuses and reasons to the airplane as to why it shouldn’t leave.

From the melody and lyrics alone, the song is successfully executed. Outside of the imbalanced distribution of lines, which was probably to be expected thanks to “My Type” and Rhythm Ta”, the song highlights sections that you can’t help but sing along. And while the lyrics compliments the music video, the MV’s plot falls short of being completely understood by the viewer.

The focus is on B.I., and Bobby, the two main rappers of iKon. The female role is played by Ji Ha-yun, from Who Are You: School 2015. The three  of them play high school students involved in a love triangle. The rest of iKon (Junhoe, Chanwoo, Yunhyung, Donghyuk, and Jinhwan) play questionable supportive friends. Yunhyung comforts B.I. about Ha-yun leaving, while Bobby is sitting to the right of him, seemingly forgotten. No one comforts Bobby about the situation, or did they forgot he was in the same scene? Do I want friends like iKon if they’re going to act like that? If I’m Bobby, no. If B.I., then yes.

The timeline of events is confusing and it definitely takes more than one watch to understand what happens when. Following the standard dramatic structure, at the beginning, you’re smacked with the rising action right before the point of the climax (B.I. struggling with the decision to leave for the airport) and the conclusion (B.I. in the outfit from the airport scene, staring at his phone, surrounded by iKON). After all that happens, the exposition comes into play, finding out who the three main characters are and their relation to one another.

It’s clear that B.I. and Bobby are best friends who have feelings for the same girl. The video, at first, makes you feel like B.I. 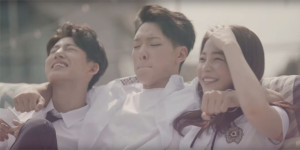 is the friend-zoned third wheel and Bobby is hiding the relationship between himself and Ha-yun. The overdramatic pushing of Ha-yun away after he catches her when she loses her balance on the skateboard (which we can assume she’s on, but never really see one except maybe by accident in two scenes) plays into the idea. She doesn’t seem phased by the close contact, but Bobby wants to keep the relationship hush hush because he’s most likely aware of B.I.’s feelings for Ha-yun. Because of this, he tries to keep her at a distance while his best friend is around, as to not hurt his feelings. But the truth is that Bobby is hiding his feelings for said love interest while she sees him as just a friend and B.I. as definitely more than a friend. Typical high school love triangle trope.

Later on, B.I. accidently finds out that Ha-yun is leaving for Fukuoka, Japan by looking at the ticket in her wallet. 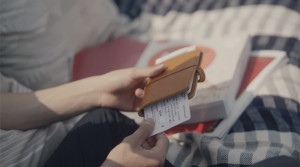 But there a big question that goes unanswered: why is she leaving? Usually in these types of situations, a main character would accidently find out why someone important to them is planning to leave without a word. In their discovery, it would reveal to the viewer the reason for her silence. Maybe her father’s job requires her to move a lot. Perhaps her mother is ill and needs to go to Japan for health reasons. Bobby might be the only person who is aware she’s leaving (his scene alone on the bridge might imply he knows something) but he doesn’t tell B.I. about it and B.I. doesn’t tell Bobby either. So unless there’s going to be another video coming out explaining why she went to Japan without a word, this storyline has a terrible plot hole that needs to be filled.

Another big question is thankfully answered by the silhouette scene: who does Ha-yun truly have feelings for? B.I., who is standing to her right, takes her hand and she willingly accepts. You can tell the two males apart by their hair and clothing. Also, Bobby wears an earring outside of their school uniform and B.I. doesn’t. This reveals that the third wheel is actually Bobby, not B.I., which the video first made you believe. Now, the secret relationship idea is flipped with acting normal around Bobby, thus B.I.’s jealously and side-eyeing (some are quick, so you may miss them) as Bobby inserts himself constantly between the two of them. It reminds me of Taeyang’s “Wedding Dress”, except the third wheel gets the girl and a happy ending. Here, no one lives happily ever after because there is so much unresolved and unsaid.

Going back to the dramatic structure, the climax hits when B.I. decides to go to the airport and takes off a sweater that says: “There is Always Sunshine in My Heart” (because when you’re in a rush to catch someone leaving on a plane, you have time to change into a flannel shirt). Hidden meaning in the clothing about his feelings? Most likely.

Another confusing point seems to be a time conflict. Ha-yun’s plane ticket says her departure time is 12:20 PM. Given the two hour allotted time to get through security and check-in at least 45 minutes before the flight departure, the clock in the airport seems to have her boarding roughly around 10:17 AM, which is early since international flights leaving from Asiana Airlines do not board until roughly 30 minutes before their departure time. Furthermore, B.I. takes the battery out of the clock when it’s 3:57 PM. But if that’s the time when he decides to leave to catch Ha-yun, he’s ridiculously late. It could be 3:57 AM and he’s waiting for her phone call to say that she’s leaving for he has the phone by his ear during a scene when he’s in his room. But considering the placement of the scene and there’s no windows in the room, we can only ask, “why is the clock important to the scene?”

To add more discord, why does she look back expecting someone to be there when she didn’t tell anyone she was leaving? A claim that could have supported this would be if she knew about the small paper airplane that fell out of her wallet when she handed her passport to the check-in clerk. If at some point she had it on her or was looking at it on the plane, it would make sense for her to look back. I honestly suspect it was a note from B.I.. 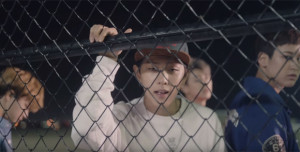 The video made an attempt to be cute and sorrowful, which it succeeded in that aspect. It, however, failed with having a incoherent storyline, resulting in a music video filled with plot holes. The scenes outside of the love triangle scenario are mellow and subdued, fitting the melody of the song. iKon were probably told to just look emotional and upset, and they nailed it, except when I feel like Chanwoo is staring into the essence of my soul.

Tell me, do you have any answers to the questions posed or unanswered questions of your own? Did the song and/or video live up to your iKON expectations? Since there’s so much focus on B.I. and Bobby with the three releases, which other members would have cast to play the roles beside Ha-yun?