Oh My Girl Wishes to Be "Closer"

Earlier this year, Oh My Girl debuted with the sugary “Cupid.” Like a lot of female rookies this year, their concept leaned toward the image of innocence and purity. There’s nothing negative about going the cutesy route, except many groups do little to sway one’s attention from an overdone concept. In an industry inundated with ideas that stay in the box, rookies have to work several times harder to stand out.

A brilliant way to do that is to come out with a great song and matching visuals that implant a memorable impression of the group. While I didn’t care for the cacophony that was “Cupid,” I found myself pleasantly smitten with “Closer.”

Lyrically, it’s pretty much a lullaby about a crush. The girls wish on stars to get closer to their crush, hoping the universe will make the fantasy come true.

The group is clearly meant to appeal to a very young market, so the lyrics probably speak to the hearts of lovesick teenagers everywhere. That’s not a terrible thing, especially if it works for their image. 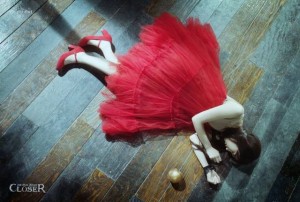 When I first heard this song, I felt an immediate sense of nostalgia. It reminded me of Utada Hikaru mixed in with a bit of S.E.S. Oh My Girl’s vocals stood out beautifully because the instrumentals didn’t drown out their voices. It was the first time I recognized the wonderful harmonies this group could achieve under a well-produced track. I didn’t care for the gratuitous rap break towards the end, but I did appreciate no one yelling a high note this time. The vocalists worked within their range instead of straining for notes that sounded off pitch.

Visually, this video was quite lovely and complemented the theme of the song. There is a blend of reality and fantasy that enhances the meaning of the lyrics. The shot distribution felt a little uneven, but every member appeared ethereal in the close-ups. References to Little Red Riding Hood, Alice in Wonderland, and Snow White are sprinkled throughout the video like pixie dust as Oh My Girl ventures through various fairy tale worlds, falling deeper and deeper into an infinite universe. It’s sort of like how someone can fall more and more in love with a crush.

Their journey finally reaches an end when they find a golden apple; but alas, this only sends our heroine into a cursed slumber when she eats it. One could read this as biting into the Forbidden Fruit, which would imply there are some biblical references in this video. However, I’m going to stick with the hero quest theory, in which our heroines traverse far and wide for a mythical object. In this case, the object of desire is love, but what does the curse mean? Perhaps the message is that their crush will remain a dream forever, no matter how close they get. 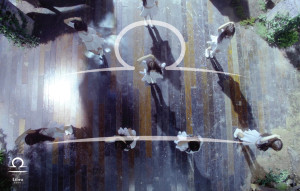 The most eye-catching part of this video for me was the choreography. Girl groups don’t need hard-hitting choreography for it to be appealing; they just need to nail a dance that fits the song. The choreography for “Closer” is very simple, but the execution sells it. Instead of relying on elementary steps that ensure not a hair falls out of place, emphasis is placed on perfectly timed movements that don’t come across like a cheerleading routine. Oh My Girl keeps clean lines throughout the MV with smooth transitions into eye-catching formations based on zodiac signs. The little intricate hand moves are a nice touch also.

Overall, the song and video aren’t anything fresh on their own but do blend well together for a lovely combination. It was also great to hear more cohesive harmonies from the group that aren’t overpowered by the instrumentals. Oh My Girl sounds “Closer” to their label mates B1A4 when they don’t force out the notes and allow the members’ voices to speak for themselves. It may be a while before they reach the level of their seniors, but this song shows us that they are well on their way to achieving a promising future.