Two years after WIN, iKon finally makes their debut — sort of. As usual, YG Entertainment proceeds to taunt fans with promises, only to go in a direction different from what anyone expected. Contrary to what fans hoped would be the official title track of their upcoming album, “My Type” is a warm-up single. In other words, we’ve just been given a sample bite.

Bite-sized or not, the flavor content is not to be overlooked as “My Type” introduces iKon in a smooth, romantic manner. Instead of going for a hard-hitting concept out of the gate, iKon opens the door and lays out the red carpet to woo potential fans. While this may disappoint those who love high-energy tracks, the lighthearted song works well as a tune for autumn.

Lyrically, we’re getting your typical “this is my ideal girl” song. They say all the right things about how girls don’t need to work that hard for their attention because they’re perfect as is. The group is relatively young, so the puppy love angle works for them. They’re still in that innocent stage of a crush where you feel the butterflies in the stomach, and birds sing as you hold hands beneath a canopy of cherry blossom trees.

As for the melody, it’s quite mellow and laid-back with an acoustic guitar as its main foundation. Bobby carries most of the lines, including the chorus, but he’s aided by B.I., Chanwoo, and Junhoe for a couple of parts. Both Bobby and B.I. get in their rap bits without any awkwardness, but the vocal line distribution feels uneven throughout the song. 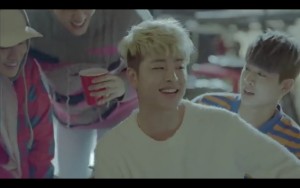 While it’s great to have rappers who can carry a tune, it’s somewhat disconcerting when they’re the main ones doing most of the singing instead of the actual vocalists. Junhoe does a lot of singing and ad-libs also, but it remains to be seen how well the other singers will fare at this point. Their inclusion felt obligatory and puts them in the role of support squad rather than team members. Hopefully, they get more lines in later releases.

Now let’s discuss this MV — it was cute. Just cute. Nothing wrong with that as a warm-up, and I’m sure fans screamed over seeing them looking adorable, but for the uninitiated viewers who didn’t watch their reality shows, this tells us very little about the group as a whole other than they have a sweet side. If this was any other rookie group without a built-in fan base, would they still garner the same attention with this level of MV?

That’s not to say it wasn’t well done, but it fell a little short of expectations given all of the hype built over two years. While the guys are talking about what their ideal types are, we only see them looking at girls in the very beginning of the video. It may have been nice to see them trying to flirt, or go on wacky escapades to find more cute girls, but the focus is primarily on the group being themselves. It’s fan service at its best, but I wish it complemented the lyrics better.

I love the washed-out pastel tone of the video. This fits the mood of the melody with its use of soft filters and lighting. The wardrobe matched wonderfully, and it didn’t look like iKon was uncomfortable at all. I believed these guys would hang out looking this way, and chances are, they are probably wearing their real clothes. They’re the updated version of the boys next door, albeit for that one scene where they wore suits; but I’m not complaining because they still looked good. 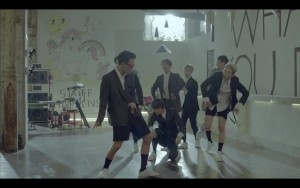 There isn’t much of a story line here, which would’ve been nice for the song, but it does paint a lovely picture of the group. Since this is for a warm-up single, I suppose you can say this works as an introduction because it sets off a nice, positive impression. I simply wanted more in the way of perhaps a Michael Jackson “The Way You Make Me Feel” concept because it would’ve been fun to see them trying to pick up girls. Side note: The King of Pop does make a cameo, courtesy of Bobby’s slick dance moves.

Even though the video left something to be desired, I did enjoy the song itself. It was light and refreshing, and I’m glad it was chosen as a warm-up single. Honestly, I wasn’t sure how to receive this group since I don’t follow them much, and there’s a ton of hype surrounding their debut, but this wasn’t bad. The song was enough to peak my interest, which matters the most since music should be what counts overall. Not sure what to expect from iKon down the road, but if this song is any indication, then they could become “My Type” of group.