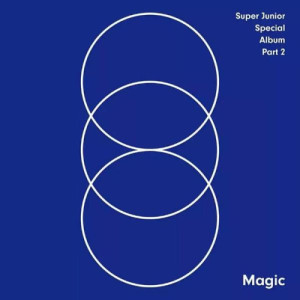 This week saw the release of “part 2” of Super Junior‘s 10th anniversary album, Devil. Sounds special, but with only four new songs accompanying the existing 10 songs, it’s apparent that Magic is just a repackaged album sold under a different name.

I thought this would be the most disappointing aspect of the release; but apparently not, as it seems no one likes the album cover for Magic.

When Eunhyuk made an Instagram post about the upcoming repackage, Heechul left a comment asking if the album cover was made using MS Paint. My lo-tech self loves Paint to death (it’s incredibly useful!), but Heechul does have a point. I mean, how much more basic can you get than white concentric circles on a blue background and generic font?

Eunhyuk and fans seemed to agree with this sentiment, as he was soon reposting fanmade album covers to Instagram:

Even Peter of R&B/Hip hop trio One Way and production group Team One Sound, who have produced a number of Super Junior tracks, took to Twitter to voice is disapproval. It sums up everyone’s sentiments quite nicely:

I think this photo describes the moment we all saw the cover. pic.twitter.com/fXVS2WA4HV

So, readers, what are your thoughts on the album cover for Magic? Any fanmade covers out there that have caught your eye? And what other album cover fails do you remember? Share them in the comments below!