The Genius Season 4: You Really Can't Win in the Same Way Again 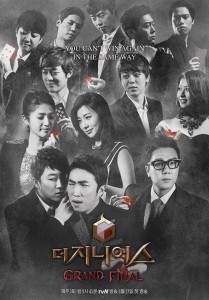 TVN’s hit reality game show The Genius: Grand Final has recently ended its 12 episode run last Saturday on a high note, with its highest rating of the season and a considerably large following for a cable program in general. This marks the end to the fourth season of the series, and, as previously announced by the show’s producers, quite possibly the series itself as well.

In a nutshell, the show features thirteen players competing in a variety of intellectual games, with one person being eliminated each episode. If you haven’t watched the previous three seasons, they have been reviewed by Seoulbeats here.

What is special about season 4 is that all the participating players had been players of previous seasons, handpicked as being the most outstanding from their respective seasons. As season 3’s Yoo Su-jin stated in an interview leading up to the season premiere, one of the major points to watch in season 4 is the differences in ability between the players of one season compared those of the others. 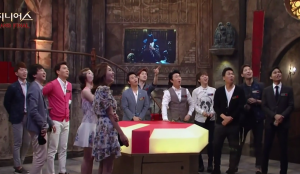 Personally, I found that the cast line-up of this season was surprisingly appropriate for its “all-star” title. Inviting the winners and (first and second) runners-up of the previous three seasons was a given; these eight players alone already offer a diverse variety of playing styles that promised an interesting watch.

Jang Dong-min and Lee Sang-min excel at team play with their outstanding ability to lead and control others, while Hong Jin-ho and Oh Hyun-min do well individually – the former with his unique ways of thinking and the latter with his amazing calculation abilities. Kim Kyung-ran is possibly one of the strongest female participants with a good brain and impressive people-reading abilities, and Im Yo-hwan is a pretty well rounded player who managed to work his way to the top of the second season with a minimal number of garnets.

Finally, we have the kings of mentality Choi Yeon-seung and Yoo Jung-hyun: the former proved his by maintaining his composure when he was ganged up on in a main match; and the latter wasn’t regarded as a threat until he survived three death matches in a row. The show also gave some of those eliminated earlier a chance to prove their worth. Im Yoon-sun, Choi Jung-moon and Kim Yoo-hyun were among those eliminated partway through their respective seasons, but have all shown impressive play at some point. And among those that were eliminated the earliest, Lee Jun-seok and Kim Kyung-hoon were brought back to give them a second chance. 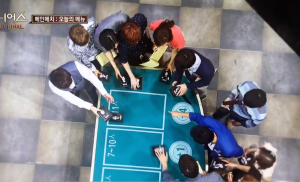 What I enjoy about the games in The Genius is that while the players are often obsessed with finding a sure-fire strategy to win, most games don’t appear to have a set way of winning; rather, the “winning strategies” all depend on the players’ ingenuity, which means that at the same time, there’s more room for variables as well. Today’s Menu is possibly the best example of this, as the hidden compartment of the box could’ve been the determining factor in creating a winner; but instead its application led to the discoverer’s downfall.

Most of the games are well-designed in terms of complexity, as one of my biggest complaints with some of the other seasons was that the games were either too easy or alliance-based (i.e. Winning Streak from season 1) or too difficult to follow (i.e. Middle Race from season 3). Another surprising addition in this season was puzzle games, such as with the mini-games in Cooperative Hold’em, and Mystery Sign in the finals. Usually, this isn’t the type of intelligence The Genius puts to the test in its matches, but its addition made the episodes much more interactive for viewers, who could pause the video and play along.

In terms of the flaws in game design this season, there is a lack of individual games – most of the main matches required forming teams to some extent, which wasted the potential of some of the players who excel more through individual work. Furthermore, while Indian Poker is probably a classic among death matches and an audience favourite, The Genius should’ve attempted to remove the luck element of winning; twice already (once in season 2 and once in this season), the winner of the match was determined by flipping cards, due to both players having  gone all-in on an equally low number. 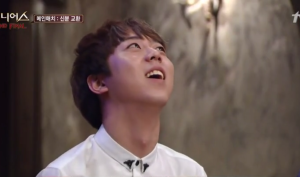 The first few episodes already gave a good idea of the playing styles of the contestants throughout the rest of the season. Immediately in the first episode, Jang Dong-min and Lee Sang-min re-established themselves as the stand-out players in their attempt to take control of the game.

Oh Hyun-min also, without meaning to generalise too much, showed the strength and flaws of a typical bright college student in his play during the first main match – his brilliant mind allowed him to calculate a “perfect” way of winning, but lack of life experience lead him to having a mental breakdown when things didn’t go according to plan.

This street smart over book smart theme became one that was continually hammered in throughout the rest of the season, as well as throughout the entire series, as the winner is never the one with the highest level of education. It does get a bit redundant in my opinion, especially since there are times when studied knowledge does prove to be valuable (case in point: Choi Jung-moon’s memorisation of pi), but the show does an adequate job of recognising these moments; therefore, this is only a minor complaint.

Another recurring motif throughout all seasons of The Genius is its motto: “Beautiful defeats and ugly victories.” Season 4 is no exception. Some of the most loyal or trusting team players ended up being the ones that ended up receiving the short end of the stick in games, such as Hong Jin-ho, who almost came last in Fish Shop due to his refusal to offer a price lower than what he promised despite suspecting betrayal from his team members, and Kim Kyung-ran, who lost Minus Auction II due to her belief that Kim Kyung-hoon hadn’t eliminated her number.

Meanwhile, in terms of ugly victories, Choi Jung-moon comes to mind – in both the fifth and sixth episodes, despite her actions to avoid elimination coming off as desperate, she was able to avoid last place twice in a row. This raises some interesting questions about whether it is better to “go out with style,” as Kim Kyung-ran said in choosing her death match opponent, or whether pride didn’t matter: a winner is a winner. 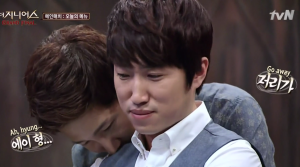 The entire season showed that if you stay static in a changing environment, you’ll eventually be left behind; therefore, the only way to survive is to be constantly improving yourself. The finalists of the season, Kim Kyung-hoon and Jang Dong-min, are probably the best embodiments of this idea.

Kim Kyung-hoon emerged as the underdog that made it further than anyone expected by using his troll image to his advantage, and putting much effort in practicing for the death matches, which accounted for his extraordinary ability to survive them. As he stated in his interview during the finals, he was able to identify his flaws and learn from those around him, successfully leading the public from #TeamAnyoneButKyunghoon to developing a newfound sense of respect for the player.

Jang Dong-min, on the other hand, appears almost flawless in his play, but Hong Jin-ho had rightfully pointed out in one of the earlier episodes that his biggest weakness is his self-assurance, and his tendency to champion his own judgement too much. In later episodes, after Jang Dong-min had presumably seen the interview, he admitted to his flaws, and appeared to be more humble as a player. 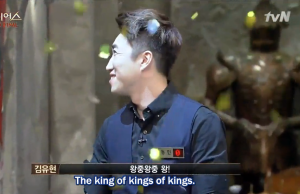 Finally, I believe the winner of the season deserves a special mention for his commendable play. Jang Dong-min is really a well-rounded contestant in all aspects. He’s good at group games with his leadership skills and ability to earn the loyalty trust of others, but he isn’t weak in the individual aspect either.

Despite having gone against opponents that have an advantage over him in terms of experience during one-on-one death matches such as Gyul! Hap! and Twelve Janggi, he was able to find his own strategies that ultimately allowed him to emerge as victorious. He’s strong in psychological battles and able to stay unfazed when things go very wrong; he seems to have extremely sharp senses which give him a minor edge in some games.

It’s disappointing that The Genius is over, but the show has made its mark in variety show history with its unique concept and style. There have been plenty of impressive, fun and bittersweet moments throughout its four season run, and the cast-cast interactions (as well as the cast-dealer interactions) will be greatly missed. Here’s hoping the producers will go back on their word and produce a fifth season; but until then, the show has certainly been an enjoyable watch worth the time.

Also, many thanks to Bumdi for subbing the entire series!