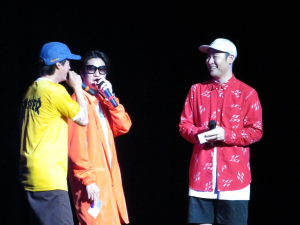 This is a love letter to Epik High, from a grateful fan, for coming in concert to Hawaii. Although Hawaii has been on the cusp of Hallyu from the beginning — many believe the K-drama craze outside of South Korea began in Hawaii — we have gotten almost no love in return.

Hawaii and South Korea have a long history together: it was the first state in the US that many of the pioneering Korean migrant workers settled in; the locally owned KBFD-TV has been in operation since 1986 broadcasting Korean shows from KBS and MBC; we have a continually growing Korean Festival every year; there are several Korean films featured every year at the Hawaii International Film Festival; and we had the first American K-pop FM radio channel KORL 107.5 debut in 2011. K-dramas are huge in Hawaii: everyone and their grandma probably watches K-dramas themselves or has a relative that does.

And while Hawaii has a lot of Hallyu love, Hallyu hasn’t had much love for Hawaii. It’s a problem that any K-pop fan not living in K-pop metropolises can relate to. There’ve been some visits from minor K-drama and K-pop stars at the Korean Festival and other events, Rain cancelled a concert he was to have at the Aloha Stadium, the Wonder Girls and JYP had a few concerts at a bar venue in 2010, a few K-pop videos were shot here (Big Bang’s “Always” and Sistar’s “Loving U”), several photo shoots for Korean magazines have been done here, and a few popular K-variety shows have filmed here including We Got Married, Infinity Challenge, and Let’s Go To School. 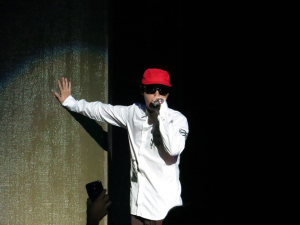 There was a lot of excitement in the Hawaii K-pop fan community when it was announced that Epik High would be holding a concert here at a legit venue (the Neal Blaisdell Concert Hall), with reasonable ticket prices ($65 – $100), there would be a Meet & Greet ticket package ($100) that anyone with a ticket to the concert could purchase (where you could meet Epik High, take a picture with them, and get an autograph), and they even created their own website for the concert with all the information about the band and the concert for fans.

Other than a little mix up when they changed the buying process for Meet & Greet tickets, there were few problems with the concert planning and production for fans — a somewhat rarity in K-pop events. On the day of the concert, fans lined up outside the concert hall and were able to get in quickly with no problems. Of course, the concert venue was small — nothing like a KCON or Big Bang concert’s mass of fans –, but staff had everything under control. A special shout out to the K-pop Hawaii group for planning some fans events and giving out signs and light sticks for everyone at the concert.

The concert started about 15 minutes past the posted start time as DJ Tukutz took his spot behind the turntables and the first strains of “Encore” would mark an epik two hour ride with some of K-hip-hop’s finest. Tablo, Mithra Jin and DJ Tukutz were in fine form and truly looked like they were excited to bring their music to Hawaii fans. It was Tablo’s third visit to Hawai,i and Tukutz and Mithra’s first time along with their families who were also in the crowd enjoying the show. Although the three members technically qualify as ajusshis being in their 30s, married, and (mostly) with children, their energy level never waned and just kept going “Up” to the delight of fans.

Epik High effortlessly worked their way through a set list of 20+ of their classic hits like “Fly,” Umbrella,” “Map the Soul,” “High Technology,” “One,”  and “Fan” and songs off of their latest album Shoebox.  While some of the biggest reactions from the crowd were to their more current hits like “Born Hater” I was really surprised by the number of fans that knew all the lyrics to even their oldest songs. The longest lull in the concert happened halfway through the show while they were changing their clothes backstage.

During this time, Tablo and DJ Tukutz verbalized a love letter to Hawaii.  They talked about all their favorite things about Hawaii with DJ Tukutz digging deep and pulling out every English word he knew that could somehow relate to Hawaii. It was totally adorable and showed that they cared enough about their fans to know a little something about where they were performing. Seriously, who could possibly hate Epik High?

There was a ton of fan interaction with Tablo performing as the main emcee, although DJ Tukutz hilariously tried to keep up with him in English. Unfortunately for Mithra, the least English proficient, Tablo took the opportunity to continuously adlib answers for him, tease him, and try to get the newly-wed in trouble. They played off each other comfortably and with ease, something only 14 years of working together and being friends can produce.

Fans in the front row got a lot of aloha from Epik High as all the members continuously shook hands, took pictures with the fans, and “showered” them with love. Seriously, I think I now know where B.I. learned how to do the B.I. sprinkler from (“That’s no, no”). Hawaii reciprocated because the crowd was on their feet and screaming for the whole night, you could just feel everyone’s excitement. Tablo actually fell off the stage at one point and in his own words “almost died.”

My personal favorite performance of the night was of the song “Rich” off of their Shoebox album. It’s a deep song with beautiful lyrics that speak of what being truly ‘rich’ means. Epik High is known for the quality of their lyrics and what really sets them apart from being a K-pop act is their songs. Their songs aren’t about love, and falling in love and the girl/boy of your dreams.  Their songs are about life, the struggle of trying to survive in this world, trying to live your dreams and protecting what’s important to you. It’s at times like this that I truly regret not pushing myself more to learn the Korean language.

A lot of talk in the Hawaii K-pop community prior to the concert consisted of fans urging others to attend the concert, whether you were a big Epik High fan or not, to support K-pop in Hawaii. What these fans were saying is true. As a K-pop fan, if you want more K-pop concerts to come to your state (city, country, etc.), when groups come whether they are your bias or not and you have the opportunity to go, you should.

Only by showing that you have a strong K-pop fan base will you prove to K-pop entertainment companies that your home is deserving of their attention. I know there were fans from Hawaii that went to the concert just to support the K-pop movement in Hawaii and weren’t really Epik High fans; but I am sure that, while they might not have walked in as fans, they sure did walk out as fans. The concert was that good, the fans were that hyped, and everyone left in what could only be described as an Epik glow.

My biggest regret of the night is we couldn’t give Epik High a sold out concert, although the venue was three-quarters full. What mattered the most though, is that Epik High were really happy to have their concert in Hawaii, and Hawaii was more than happy to have them. #MahaloEpikHigh!