N. Flying Give a Dramatic Performance with "Lonely" 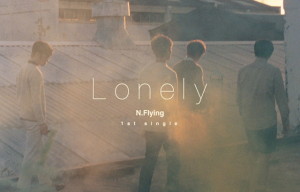 N. Flying, CNBlue‘s and F.T. Island‘s junior group, is back with a new MV and single, “Lonely”. If you’re still unfamiliar with them, I would highly recommend checking out their work. They officially debuted in Korea only this summer with the song “Awesome”, but have been promoting in Japan since 2013.

Like the older groups under FNC Entertainment, N. Flying is also a rock band rather than a traditional idol group. Though FNC’s older groups have been around almost as long as Super Junior and Big Bang, it’s great to see that the industry hasn’t given up on the band idea, with even JYP Entertainment adding band Day6 this year, and N.Flying’s coming back to debut in Korea this summer.

The song for their second Korean MV “Lonely” is about the difficulty in letting go of the one you love after the relationship ends. Both the song and the MV do a good job of portraying the sadness and bittersweet nostalgia one might feel when they’re left behind with only memories. The melody is very simple and vocalist Lee Seung-hyub‘s rap-singing lends an interesting conversational quality to the song. It’s the sort of song that can be sung along to easily, either very lightly or with all the suppressed emotion of a true break-up, depending on the listeners’ needs.

The music video is also very simple, following both the lyrics of the song and the overall feeling. It starts off with Seung-hyub acting as if on a drama set in an old-fashioned styled room while he says, “Today I miserably broke down, by repressing your memory, like the characters in a TV drama and their incomprehensible circumstances. Feels like my own story…” The old-fashioned set (complete with records, typewriter, a rotary phone, and your grandmother’s couch) also fits with the next line of the song which references the ancient act of rewinding a movie film. “Sitting in a movie theater every night, like rewinding a film our promise to look to the future is now.” The men are also seen later on lying on the floor surrounded by movie reels, again referencing the replaying of their happy memories, which has left them exhausted.

The second verse picks up right where the storytelling left off. Seung-hyub is bemoaning his mistakes while lying in a bathtub fully clothed – remember, “like the characters in a TV drama.” It is there where he tells us how it all went wrong. This verse in particular makes the song seem so much more real, that despite being the one to want to go back to the good times, he was actually the one to cause so much strife, and yet he even misses the scolding he had to endure then.

Compared to the angel that you were, I was evil

Our promise hidden behind my feelings

Remaining hidden, I bluff and bluff

Pretend my ears are closed and pierce your heart

I often did what you hated most

I miss your scolding

The moping acting continues as we see Hun slouched at the base of a bookcase and drummer Jae-hyun perched despairingly on top of his washing machine. But as we move again into the chorus, the mood seems to lift slightly. When we see the members all exhausted after a night of replaying those films, the lighting is brighter and reminiscent of the morning sunrise. A door opened onto that scene and again we see doors opening when the four men each step out of the dark box of their memories and walk toward the light. Thinking back now, even when the room itself was dark and they were in despair, each time there was a lamp, a pinpoint of light, somewhere in the darkness.

Finally, in the last chorus, the members move fully out of their drama and not only does their acting change but the lighting and the set as well. They’re all on their instruments and performing together as if actually on stage as musicians, and behind them we can see each of the previous sets – the living room, the bathroom, the library, even the piano – all spread out under bright stage lights.

Breaking the fourth wall like this really makes the acting and drama of the beginning that much more noticeable, though not negatively. Cheers to Seung-hyub and the other members for not over-doing their acting. Even with more emphasis placed on those first lines and setting of the song and video, it only seems to add to the absurd nature of going through a break-up and wanting only to hold on to something that’s already gone, rather than commenting on their dramatic skills.

As for the song itself, and despite the nature of the lyrics, it is actually incredibly pleasing. The soft piano that flows throughout the entire song contrasts nicely with the drum and electric guitar, just as Hun’s light singing contrasts with Seung-hyub’s rapping. As I mentioned earlier, his rap-singing has its own flow so that it sounds as if he is simply talking with the listener, which also blends very well with the other members when they sing together in the chorus.

I only wondered about two things while listening to the song — why was the ending so abrupt, and who was playing the violin? If they had answered those questions I could have given them a perfect score, but alas. However, I enjoyed the way they managed to convey the story and feeling behind the lyrics in the music video without an explicit plot line, and though I would have liked to see them playing their instruments for a bit longer, I was pleasantly surprised by the way they displayed their musicianship in the end.

Moonlight and Stellar Musicianship: N.Flying’s “Man on the Moon”

N.Flying Coaxes Away the Cold with “Spring Memories”