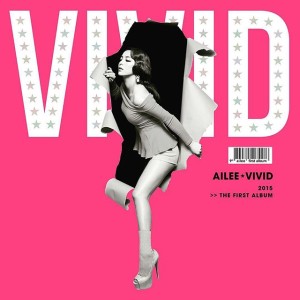 Ailee is undoubtedly a powerful singer. That much is clear from a single listen to any one of her songs, off her latest (and first) full-length album Vivid or from her earlier minis. Known for her over-singing, Ailee has never quite managed to hit it off with me, instead often seeming to overcompensate with technical prowess for a lack of emotion and unchanging song style.

Perhaps her place in the international fandom as both a former resident of New Jersey (represent!) and a close friend to f(x)‘s Amber is the reason, but I always feel inclined to give Ailee a chance. With a set of pipes that has dubbed her the “Korean Beyoncé” and a reputation built on girl power, Ailee has the makings of someone distinctly talented and charismatic. Unfortunately, she does not always manage to communicate the emotion in her music, and that pattern repeats in Vivid.

Opening track and promotional single “Mind Your Own Business” is a perfect example of this. I just don’t feel the anger or bitterness I would expect from a track that includes such lyrics as “Even if you beg me to come back/I won’t buy your lie.” The brass and funky guitar are great but sadly put Ailee in the backseat. The production is weak: it overpowers Ailee’s vocals, a feat unto itself. I would blame the production if it weren’t for the fact that the next song, “Insane,” follows suit: We get strength, but it feels hollow. The same could be said of “Second Chance” and even “How Can Someone Be This Way” in the chorus.

The ability to allow one’s voice to fluctuate to show both fierce power and delicate fragility gives the full range of emotion, which is often missing in Ailee’s music. And being the queen of break-up songs doesn’t mean she can’t show vulnerability. To the contrary, the act of ending a relationship and trying to move on is one of weakness — but it is also one of strength. These types of power anthems may come after the crying and the hurt, but for them to become anthems, they must show that this strength comes from pain. Ailee, though, seems to skip the emotional foundation of these songs and goes straight to powerhouse vocals.

Despite this shortcoming, the whole album doesn’t necessarily miss the mark. The last tracks of the album, especially “One Step Closer,” show a more versatile singing style than Ailee typically exhibits. The softer, more tempered singing Ailee employs in the verses is so much more evocative than the oversung vocals alone off which she’s made her name. This more even-handed approach brings breathy whispers, quivering melodies and burgeoning strength all into a single track, making for an absolutely splendid send-off.

Technically, there is nothing wrong with Vivid, other than some odd production choices in balancing vocals and music. Sure, Ailee’s emoting skills may leave room for growth, but she is still an incredible singer with such mastery and power over her voice and even more potential to tap, as evidenced in the aforementioned last few tracks of the album.

Yet, the album fails to give us the versatility one would expect from ten songs. The details may vary, be it the acoustic guitar of “I Love You, I Hate You” or the strings in “Symphony,” but they come together in the same recipe: pop-R&B with occasional tinges of jazz. The few songs that stray from this formula, such as “Letting Go” — which also features close friend Amber — fall flat, coming across as recycled electro-pop tracks that no one wanted as a single. 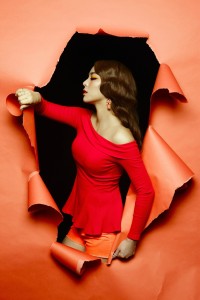 With such powerful vocals, Ailee has the potential to tap into so many more genres that would give her the breadth to show both skill and emotion. What I would give to get rock, blues, even gospel from her. She certainly deserves a chance to show that she is more than this easily digestible, radio-friendly stuff she puts out.

Even though she is loved in the international fandom, Ailee sadly disappoints me with this full-length release. Instead of showcasing a new side, we get more of the same old-same old. Then again, if you enjoyed her earlier releases and want more of that, I’m sure this will be to your liking. But with its lack of stylistic diversity and the same emotively shallow over-singing as before, Vivid just doesn’t have the expressiveness one would expect from an album titled as such.

What do you think of Ailee’s album? Am I the only one who doesn’t think Ailee has yet reached her full potential?