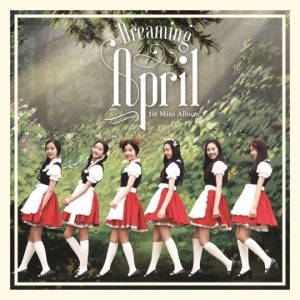 After a lot of individual member exposure and group teasing, DSP’s new girl group April has finally made their official debut with “Dream Candy” and their first mini-album Dreaming. Given DSP’s generally good track record of successful girl groups, expectations for April were high, especially given some of the members had received exposure since their trainee days. If anyone remembers Kara Project, two of the finalists, Somin and Chaewon, are part of the six members that form this group. One thing that will never cease to amaze me about idols is how seamlessly they seem to switch between concepts, and it’s interesting to see the two ex-Baby Kara members go from performing Kara’s songs, such as the mature “Lupin” or the fresh “Step,” to adopting this new image under April.

One look at the concept of “Dream Candy” will tell you it’s fantasy-themed, as the girls of April go on a pastel-coloured search for the mythical unicorn. One aspect in which this debut does impressively well in particular is the tying in of all elements of the piece to the concept — everything from the music video, music, song title, lyrics and outfits take on a dream-like quality. Frankly, this could actually be a con for the group as this innocent image is so powerfully reinforced that at times, it appears almost childish. However, it is also important to note that the average age of the group is 16 years old, with the maknae being only 13, therefore one could also argue that the concept is very age-appropriate. 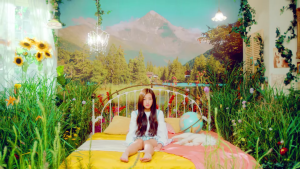 The music video, if you take out the plot, is a pretty standard young-and-innocent girl group MV, showcasing the members interacting playfully and looking cute for the camera. However, the fantasy element does give this otherwise clichéd style a unique twist; instead of coming off as sickeningly sweet, the music video creates the impression of watching a fairytale unfold, which gives viewers a sense of nostalgic innocence. The sets and locations in which the music video were filmed were also well chosen, maintaining a good balance between the colourfully constructed fantasies within the girls’ rooms and the wonder-filled, dream-like scenery of the outdoors. The soft filter and the pastel colour scheme also contribute to giving the scenes an imaginary quality, but there are moments when the use of these filters become excessive: the shot of the members lying on the grass is bright enough to hurt your eyes. The outfits are another element of the music video that tread a fine line between being concept-appropriate and borderline out-of-place. On one hand, the red, white and black dresses give off a vague Little Red Riding Hood feeling; on the other, they resemble traditional German/Bavarian women’s clothing, which isn’t a bad in any way in itself, but seems rather random in this context.

Accompanying the music video is a delicate and bright sounding song that doesn’t disappoint the concept. The instrumental starts off with a tinkling melody that resembles the sound of a music box, then thickens to create the driving energy that permeates the lyrics to the song: 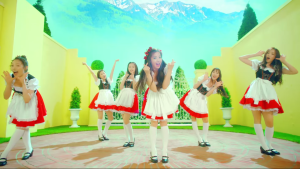 What is much more interesting about the song is its melody line. Despite the mellow introduction, the vocals start on a thumping drum beat and a melody that make it seem like the song is already building up towards a highlight without much of the usual slower lead-in. This minor detail may be off-putting for those who prefer a very typical song structure, yet it may also give the music an interesting touch that again links back to the adventurous lyrics. In addition, I personally enjoy songs where all members of the group sing in the chorus — it creates a rich sound that gives the song another layer of freshness on top of the composition itself. The biggest flaw of the song, however, is possibly its most detrimental: the piece lacks a memorable tune or hook that makes listeners remember it after one or two listens. The closest line would be the “barababa” in the refrain, which is effectively emphasised by the choreography, but given the most important task of rookie groups is to capture the attention of the public, “Dream Candy” may prove to lack in this aspect. 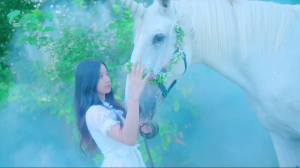 On the whole, April’s debut is not bad by any means. The consistency of their song and music video have cemented a youthful and innocent image for the group, and “Dream Candy” is a relatively solid piece musically and aesthetically. However, given the intense rookie competition this year, with female groups in particular, April’s first release may not be enough to give the group the push they need to break through and stand out. Hopefully the public response will prove this wrong though, and the girls’ debut will be well-received.

April Breaks Out of Their Shell with “The Ruby”