April Breaks Out of Their Shell with "The Ruby" 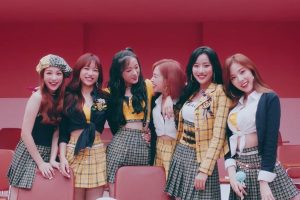 7 months after The Blue, DSP Media girl group April mades their return with their 6th mini album, The Ruby. In line with the way their image has gradually shifted through their releases,  April takes on a more charismatic persona this time around, both in terms of their styling and in a musical sense. This energetic album comes slightly unexpected for the season, but it brings life to autumn.

Beginning with the familiar, April stays firmly in their comfort zone for “Story”. While it is a sweet track that works musically, it could have fitted in easily with any of their earlier releases. It has a very April-sound, with its high register and electronic elements that beef up the song. Jinsol‘s high notes toward the end of the song are lovely, but they sound almost identical to the high notes she performed in songs like “Snowman”. While this familiarity is not necessarily bad, it definitely sticks out among the other tracks of this album which deviate more from the group’s usual discography.

The main deviant is also the title track of the album, “Oh! my mistake”. With a drum opening and the prevalence of chanted lines,  it is an interesting, if somewhat subpar release from April. The group has always been great at serving up delicious melody lines, with beautiful complementary harmonies strengthening them. The absence of a strong melody here inflicts a heavier toll than expected, greatly reducing the catchiness of the song.

While it is the song which contrasts with April’s usual image the most, it is also the least representative of April’s musical strengths, especially for this album. On the bright side, this song fuses a vintage style with modernity seamlessly, with an effective synthesiser-heavy instrumental creating a retro feel for most of the track, but leaving room for cool dance breaks. The “Africa”-ish (by Toto) way the song ended is also an impressive way of wrapping up.

A more successful venture made by April is “Love Clock,” which also features a lot of non-melodic lines, but incorporates them more effectively. For one, the inclusion of rapping works well here, and the playful way the members deliver the ‘cheering’ lines add a lot of life to the fast-paced track. While slightly reminiscent of Twice‘s musical style, April manages to present this in a way that remains unique to them. This song really accentuates the freshness of the group and is the highlight of the album for me. 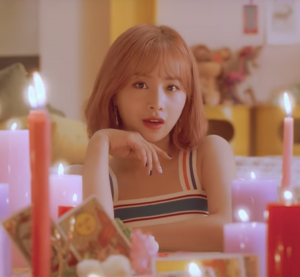 “Oh-e-Oh” feels like it has come one season too late, with its prominent use of tropical sounds more commonly associated with the summer. Not that April’s non-conformity to music trends is a bad thing, in fact, as the opener of the album, the unafraid “Oh-e-Oh” shows how the group is here to carve out a distinct image for themselves. The catchy track is enjoyable and ultimately encapsulates the overall light-hearted feel of the album.

As a whole, The Ruby is a brave release for April. While not the most cohesive album, they use many styles that they have never dabbled in before. While these are successful to varying extents, it allows them to grow musically. It is also wonderful to see how the line distributions of the songs are getting more fair, with newer members like Rachel getting more lines and opportunities to shine. This group has been consistently putting out quality music and showing continual progress; I am excited to watch where they will go next and to see them unleash the rest of their potential.