'Nineteen' and the Dreams of Youth Many idols may dip their toes into acting, but they often only do one or two projects before giving it up. It could be the companies forcing them to do something, such as Super Junior’s Attack on the Pin-up Boys, or any number of various drama parodies to give them more visibility. Or it could be they don’t have the time or energy to split among their demanding idol schedules and demanding drama or film schedules.

YG Entertainment hopes to change that with their new actors’ Stage, the new sub-group of their agency which will focus on acting opportunities for those entertainers already with YG. And who heads the top of the list of this new Stage but Big Bang’s T.O.P and Seungri? They are among many other big names in the acting industry, including Yoo In-na (My Love From Another Star), Cha Seung-won (You Are All Surrounded) and Gu Hye-sun (Angel Eyes, Boys Over Flowers).

YG’s Stage won’t be the first time we’ve seen T.O.P and Seungri acting together. One of their first appearances, in Nineteen, a 2009 film, parallels the complicated situation of the idol actor in Korea’s entertainment agencies. The film’s plot focuses on three 19-year-olds, played by T.O.P, Seungri, and Huh E-jae, who end up running from the law after being accused of the murder of an acquaintance. 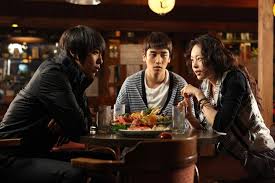 T.O.P plays Seo Jung-hoon, a freshman in a poorly ranked college with a ‘useless’ major and general family disappointment, who spends his time working at a PC-bang instead of studying. He has a crush on his co-worker, Oh Young-ae, and is thrilled when she asks him out one night. Seungri, as rich boy Park Min-seo, also has eyes for Young-ae but is too shy to speak to her and simply takes photos of her in the PC-bang without her knowing. Huh E-jae plays Cha Eun-young who has just been fired from her job as a hair-dresser’s assistant, which was supposed to be paying for her dying single mother’s medical treatments.

Young-ae, a classmate of Eun-young’s, has just asked her for money and help to follow her dream of going to acting school, but Eun-young, now without income, rudely turns her down. When Young-ae turns up dead the next morning, these three kids are the prime suspects. After the police pick them up and try to prod them into confessing, the three end up racing out of the police station together and then on the run, either until the police give up or until they can find the true culprit. 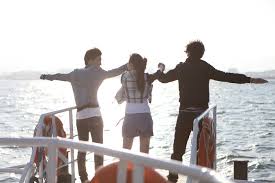 Written by Japanese screenwriter Inoue Yumiko as part of Telecinema7, a joint Korea-Japan project, the theme of Nineteen is pursuing the dreams of your youth despite the realities of adult life. Throughout the film, there are many moments when it’s clear these are still kids and not the adults the police want to view them as, though according to the film, a 19-year-old is still legally viewed as a juvenile. It’s the prejudice of the lead police officer that makes things especially difficult for them.

Late in the film, one of the kids makes the comment, “You can get a license at 18, but you still need your parents’ permission to buy a car… We’re adults but still children — what do they want from us?” It is precisely this in-between state that enables them to still have fun as fugitives, such as when they go bowling or wish to go to the beach for the first time, and it’s fulfilling these small dreams that makes them realize the larger dreams they still hold on to. 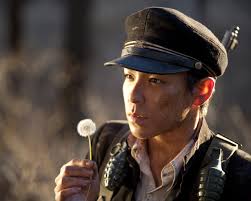 In the case of Jung-hoon, his dream and talent lies in rapping, which makes the parallels especially clear between the character and T.O.P who played him. T.O.P, the rapper, who is now seen both as an idol and an actor, has put extreme effort into creating an acting career for himself. Such a career would not be possible if he didn’t truly want to follow that path. In the context of today, when so many idols are leaving their companies to focus on acting, it is even more important that these young men and women are not tied down by lengthy contracts and forced onto one path or another, but instead are allowed to follow the dreams they truly want.

Perhaps becoming an idol is simply one step on a path to actor or actress — or one path of many as other idols are still managing both jobs (Exo’s D.O., Infinite’s Hoya and not to mention both Siwon and Donghae of Super Junior). But YG’s new Stage will, I hope, also make it much easier for the unsatisfied idols to follow their dreams, no longer be stuck in the in-between of child and adult — and, of course, without enduring something akin to the film’s unfortunate trauma of a classmate’s murder. The film, too, concludes happily and reminds us how good it is to grow up and enjoy those things you truly love with no regrets.