2PM's "My House" Is a Sensual Fairytale

We all know the fairytale: The clock is about to strike midnight, and that means it’s time for Cinderella to make a run for it before the magic fades. In 2PM‘s latest release “My House,” the heroine not only has to escape the ball, but she also has to withstand the charms of six prince charmings — all of whom are trying to convince her to go home with them. Raising the question, are the members of 2PM modern takes on the chivalrous prince of fairytales, or are they the villains?

Following up 2014’s party anthem, “Go Crazy,” 2PM has returned to showcase a more reserved — but still “beastly” — side of themselves with “My House.” The men of 2PM throw all their charms not only into the fairytale-like MV, but also into the track itself, making it a seductively enchanting experience.
[youtube http://www.youtube.com/watch?v=u2pFB1dCSo4]

The “My House” MV is a perfect example of how multiple concepts can be combined and conveyed effectively in a single MV (cough — Exo). The trick is an overarching theme: in this case, fairytales. As the leading lady attempts to escape by weaving her way through the corridors of the modern palace, she encounters not only the members of 2PM, but multiple fairytales along the way. Snow White, Beauty and the Beast, Red Riding Hood, Alice in Wonderland, and perhaps a little Romeo and Juliet are all thrown into the mix, in addition to the original Cinderella tale. These fairytales create a tension between her desire to give in to temptation and her desire to escape.

Wooyoung kicks off the wooing as he corners Cinderella on the dance floor and whispers sweet nothings in her ear. 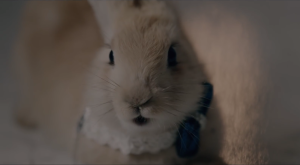 Meanwhile, Chansung observes from a distance, much like the apple-yielding queen of Snow White. Cinderella manages to escape the dance floor, but, before she gets too far, she falls down the lip-syncing rabbit hole — which may be the best surprise of the MV. Things begin to get a little more magical as she walks the line not only between temptation and escape, but also between fantasy and reality.

Following the first chorus, she encounters Taecyeon as the Big Bad Wolf — a characterization perfectly suited to his beastly rapping style.

I wanna take you to my house, follow me
Let’s secretly get out of this loud place
No bad intentions, I just wanna know you a little better
I wanna be lost in soft music with you

Wooyoung then re-appears at an intricate dinner party to tempt her with an apple. He almost succeeds before she is once again running down the corridor, only to be caught by Junho. After a moment of hesitation, she manages to escape outside. Nichkhun‘s only moment to shine comes as he conjugates the verb “to go” while waiting beside his modern carriage — a Lamborghini Aventador — for her. But, before she can fully ascend the stairs, Chansung’s claws come out, literally, as he grabs Cinderella by the wrist and pulls her away from Nichkhun and back into the building.

Here, things get a little ambiguous: Jun.K sings alone on a balcony before our Cinderella emerges from the mansion some time later (as indicated by Nichkhun’s absence). She throws one last look over her shoulder before discarding her own shoe on the staircase and running off into the night. It would appear she’s finally given in to temptation, and she’s left her shoe behind as a playful invitation for round two.

The MV brings out all the great elements of the title track along with a few disturbing ones. When it comes to 2PM lead singles, my main gripe has always been that the tracks sound empty — much like a club track playing in an abandoned club. “My House,” in contrast, is an exciting change-up. Though the track is reserved in many ways, it is undeniably complex and dynamic underneath the smooth sound. The mix is full, but never overwhelming. Every element of the mix is intensely rhythmic, and the change of the rhythm from verse to verse adds just the right amount of variety to keep the track interesting. The touches of acoustic guitar provide a breathy reprieve from the heavy beat, while the panning of vocals and instrumentals adds just the right amount of depth.

The intricate backing track, when paired with the vocal stylings of each member, charms the ear and the mind. You don’t have to understand the Korean (or read the English subtitles) to feel the persuasive nature of the track, and that’s quite an impressive feat. Chansung, Wooyoung, and Jun.K’s vocals practically drip sensuality. (I’m not going to lie, Jun.K’s part on the balcony had me ready to climb up the wall and into his arms.) Taecyeon’s rap also is confident and persuasive and showcases his growth as a rapper. What most impresses me about the vocal stylings of the track is that each member manages to sound suggestive without ever crossing the line into aggressive. 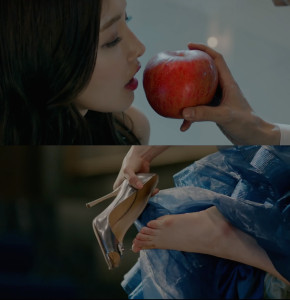 A small part of me wishes this feeling translated better into the MV for “My House” because there is only so much wrist-grabbing a girl can tolerate (even the dance has a wrist-grab motion!). It doesn’t help that a great deal of the lyrics revolve around telling the woman what she wants either.

While Cinderella does have the last stand of agency — leaving her own slipper on the stairs as an invitation — throughout most of the MV, she is being man-handled and placed into various scenes of seduction. While she may have the desires they claim she does, there is also the implication that her desires are to be hidden — kept “secret” — and she is playing coy out of social obligation. Regardless of her motivations, she’s trying to escape, and the charming men of 2PM won’t let that happen until the final seconds of the MV. Because apparently, they “know” what she wants, even if her body language is saying otherwise.

Even though the MV raises a few questions about Cinderella’s agency, it manages to put a new twist on fairytales and compliment the track quite well. This is the kind of song I’ve wanted to hear and see showcased as a 2PM title track since the sensual elevator music B-sides of Grown back in 2013. “My House” is musically strong; even without a killer hook, it pulls you in for multiple listens. I think JYP deserves a little round of applause for promoting this side of 2PM’s musicality — he also might deserve a slap on the wrist as revenge for all the wrist-grabbing.

Readers, what are your interpretations of the “My House” MV? How are you liking the track and concept?