Side B: 2PM Sounds You Haven't Heard "Again & Again" 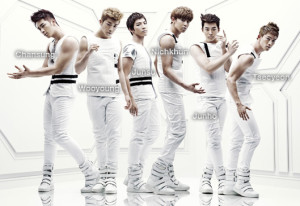 At the top of every hour, the clock strikes 2:00pm somewhere in the world. That means it’s always a good time to cop a listen to the original “beastly idols!” And with the band’s expansive oeuvre five years in the making, you’ll need more than One Day—maybe even more than one week to hear all that 2PM has to offer. If you’ve been too busy watching marathons of Khuntoria episodes of “We Got Married” and sketching portraits of their future children to experience every single 2PM track, but you’re itching to know what you’ve missed, then we’ve got you covered. In this edition of Seoulbeats Side B, we feature some of the best of 2PM that you may have skipped over while listening to their heart beat-beat-beat-beat-beat.

With five studio albums (three Korean, two Japanese), 25 singles, and numerous music awards under their belt, 2PM is one of the biggest bands in East Asia. The seven-member group burst onto the scene in 2008 with their debut hit, “10 out of 10,” an introduction to a new breed of male K-pop idol—dripping with masculine energy, swag, and sex appeal. Boasting acrobatic, b-boy dance moves, a collective 42-pack of abs, and thumping, hip-hop and R&B -influenced dance-pop grooves, the band scored one more hit with “Again & Again” before the departure of leader Jay Park amidst controversy. But 2PM “Don’t Stop, Can’t Stop.” So they didn’t. Instead, they kept the steady stream of bangers coming, along with appearances on variety shows, dramas, and endorsements. Expanding their influence to Japan with original Japanese singles, Thailand with talisman Thai-American member Nichkhun’s activities, and throughout Asia, 2PM has become one of the best-selling groups in the East.

2PM’s body of lesser-known works are representative of their signature sound—a melding of hip-hop (especially the Miami drum and base sound of the ‘90’s), contemporary R&B, and dance-pop—as well as forays into new territory. There aren’t many of their tunes that don’t deserve lauding, but their Japanese singles, which we’ll cover, as well, are special standouts. Without further ado, here is some of the best 2PM b-side beats.

“I Was Crazy About You,” 1:59PM
[youtube http://www.youtube.com/watch?v=MtJO6NH_e_k] From 2PM’s first studio album, 1:59PM, “I Was Crazy About You” is firmly in the R&B camp. A sensitive, delicate, piano-driven melody full of pathos and heartfelt vocals give the song a quiet, subdued beauty. The polyrhythmic drum machine percussion keeps things danceable and helps the song avoid the lull of lament that can bring a melancholic song to a screeching halt, in terms of energy. (The guys are sad, not ready for bedtime!) Electro-accents give the song a lushness of sound. Taec’s rap break—a dramatic verse punctuated by military percussion and high-flying violins, takes the song up a notch. “I Was Crazy About You” finishes strong, imbued with a new urgency from Taec’s interlude and a shift of key. Sadness has moved to torment, but the beauty remains.

There are so many standouts from this album that it was hard to pick just one song to highlight. The other two that were under consideration were “Tired of Waiting” and “All Night Long.” One is a high energy, high drama dance groove and the other a silky-smooth slow jam. “I Was Crazy About You” lies somewhere between the two, both in energy and in track order. But be sure to check out the runners up, too.

“Maja,” Don’t Stop, Can’t Stop
[youtube http://www.youtube.com/watch?v=MdXA3LVXyBA] The title of the album makes you wonder what type of fool would ever ask the guys to take a breather with songs this awesome! “Maja” is one of my favorite 2PM tunes. It also belongs to a group I like to call the “Jordan Knight K-pop Collection,” a list of songs seemingly inspired by the former New Kids on the Block leader’s 1999 Miami drum and base track, “Give It to You.” Other 2PM songs, as well as “Feels So Bad,” an Infinite side b track, are part of the collection, as well.

“Maja” opens with a low, fast pulse that sounds like ominous music from an ‘80’s horror film, but warps into a slow-paced, sexy tune with 2PM’s signature hip-hop/R&B/dance-pop hybrid sound that picks up to double time for the chorus. The vocals are on point in this one, with the musical accompaniment suiting Jun.K’s nasally voice the best. The “space version” of the song is equally as good as the original.

“Even If You Leave Me” Still 2PM
[youtube http://www.youtube.com/watch?v=p1w0osyhxss] This effervescent track, ethereal in a technological, futuristic way, is another with 2PM’s signature sound. (It’ll make the ghost in the machine bounce.) I’d say it even has some early ‘90’s era house music influence, especially with the beat in the chorus. The melody is sweet, hopeful, and romantic with the vocals contributing to the mood. The electronic flourishes in the background are what give the song its bubbly quality. From the Still 2PM ep, another track, “Dance 2 Night” is a delightful listen, as well. It’s got a jazzy R&B vibe to it with a swing beat,  reminding me of ‘90’s R&B forays into sophisticated retro sounds.

Hands Up is an album full of gems. EVERY track that isn’t “Hands Up” is a track that could have been a single. “Electricity,” a sexy hip-hop number, inches along like a worm, but begs you to shake your hips to it. Notably, Taec sings the first verse and does no rapping. “Give It to Me” is another part of the aforementioned “Jordan Knight K-pop Collection.” Penned by Junho (who also raps in it), this song jumps from slow jam to Miami drum and base track expertly. (If Taec is asking, whatever “it” is, I’ll be happy to hand over.) “Like a Movie” is a rare 2PM ballad, and “Don’t You Know” gets props for bringing the old school back. This New Jack Swing banger will have you doing the running man and grooming your high-top fade.

2PM’s latest Korean release presents a more mature sound, as the name suggests. With more R&B tracks and less electronic influence, it’s a big departure from their previous works. “Coming Down” is my favorite of the non-singles from the album. It’s got a gorgeous, piano-based, jazzy melody with a rubbery synth baseline. Taec’s laid back rap sound more like spoken word poetry and only accents the track’s cool mood. My mom likes this song, but I’m okay with that. “Go Back,” another track from the album, is a nice one, as well. Another Junho-penned song, it represents a return to 2PM’s more dancey sound.

2PM’s Japanese singles are some of their best releases. In such beautiful, seamless fashion, each song features 2PM’s signature sound, which has been tweaked slightly to appeal to J-pop audiences. “Take Off” is their first original release in the Land of the Rising Sun, as well as the theme song to the anime, Blue Exorcist. A lush, splashy electro-dance pop sound with an expectant, hopeful melody are this song’s strengths. The video features some of the worst clothes 2PM has ever worn, and that’s a feat. But the song more than makes up for any fashion shortcomings. “I’m Your Man” is my favorite of 2PM’s Japanese singles. It’s got a great sense of drama, a melody that unfolds beautifully, and an awesome dance-pop beat. “Beautiful” is another great dance-pop track with a driving baseline. Check out the vogue-cum-Magic Mike dance moves in this video, too.

I certainly haven’t hit all of 2PM’s great non-single offerings, but what do you think?Areur favorites listed here, or are there some you feel I missed that should have made the cut?