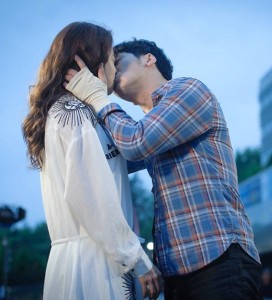 Ex-Girlfriend Club started out promising. Unfortunately, due to low ratings for the first half of the series, it was cut to 12 episodes. Hence, this past week concluded the run for Ex-Girlfriend Club. Will all of these ladies meet their happy ending?

Where we last left off was certainly the turning point of the Soo-jin (Song Ji-hyo) and Myeong-soo (Byun Yo-han) relationship. After a kiss, Soo-jin doesn’t question whether Myeong-soo is still interested in Ji-ah (Jang Ji-eun) and neither do the creators try to beat this dead horse. However, the question of whether it is possible for their relationship to overcome a complicated past is posed.

While the premise of the show does lean toward the melodramatic side, the writing felt inconsistent in this last quarter of the series. I can see where they tried to flip the script and have Myeong-soo question Soo-jin’s relationship with Jo-geun, but I can’t help but feel that the moments between Myeong-soo and Soo-jin lacked that same chemistry they had in the first two-thirds. Maybe it’s because Myeong-soo doesn’t have as much of a role in movie production, and his excuses for staying close to Soo-jin felt too clingy. Nonetheless, their relationship moments weren’t as rewarding and felt labored in comparison to the rest of the ladies of the ex-girlfriend club.

Hwa-yeong (Lee Yoon-ji) was trying to get her ideal conclusion with her fiancé, but after a wedding shoot fiasco, light is finally shed on all of their secrets. Myeong-soo and Soo-jin’s relationship is finally revealed to everyone in the dark (who seems to only be Jo-geun and Hwa-yeong) and Hwa-yeong’s prior relationship with the webtoon artist gets revealed to Young-jae. This revelation sparks the last big hurdle as the production goes into disarray and dissolution due to Young-jae’s rage over having been lied to by everyone.

I can’t seem to find much sympathy for Hwa-yeong when things turn astray for her and Young-jae. Inevitably in drama world, things operate like Chekhov’s gun where if a pistol is introduced hanging on the wall in act one, it needs to be fired in act 2 or 3 or else why introduce it at all. Secrets that are introduced will eventually weasel their way into the light or else us viewers will feel unsatisfied at the pistol left hanging on the wall. In Hwa-yeong’s case, she should have talked to Young-jae a long time ago instead of interfering in Myeong-soo’s life. If she had spent that energy planning a better way of telling Young-jae or getting him to understand her side of the story, things wouldn’t have come down to these circumstances.

Eventually her resolution was strange. Young-jae got demoted for cancelling the expensive movie project and Hwa-yeong negotiated her way back into a higher position in OZ corporation after a short spell of unemployment post-resignation. Somehow, Hwa-yeong became the direct supervisor to Young-jae. It is positive to see her truly being recognized for her ability and worth instead of banking it all on a relationship, but I’m not sure what major kicks she gets out of being Young-jae’s supervisor and working him to the bone. 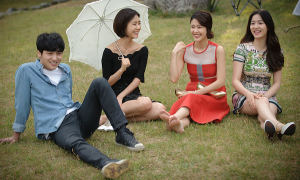 On the other hand, Ji-ah probably had the weakest but most realistic resolution. She is seen in and out of her restaurant, MSG. When she’s not there, she’s trying to discover herself by traveling and building new experiences. She probably had a bigger arc originally planned, but when the episode order was cut, her story had to be wrapped up quickly. I do like that the triangle between her and Myeong-soo was closed off. She gets to finally move on and not have any doubts as to whether he still feels anything for her.

Lastly, the most gratifying of the three ex-girlfriend endings was Ra Ra (Ryu Hwa-young). Jo-geun promises Ra Ra an audition if she uses her real name, Goo Geun-ryeong. Ra Ra goes to an audition after a recommendation from Jo Geun. There is some actual organic character progression here. From a few episodes back, we already see Ra Ra being exposed as someone who doesn’t believe in herself. With Jo-geun being such a supportive guy in not only acknowledging Ra Ra’s talents, but helping her take that step towards having positive self belief, it helps her to find strength. She takes down these facades, such as her stage name or trying to get roles in skeptical ways, and utilizes her talented acting chops.

Even though I abhorred how laboriously we got to the relationship breaking point, I also enjoyed the moment when Soo-jin’s hard working side came to a head with Myeong-soo — who basically forbade her to continue working with Jo-geun. There was a lack of trust from Myeong-soo, and that jealously was not a pretty look on him. Soo-jin put him in his place by telling him that if she can endure working with his 3 ex-girlfriends because she trusts him, why can’t he do the same for her? Especially since Jo-geun is someone she doesn’t even have any interest in. And furthermore, why is it so easy for him to throw away all of her work, essentially pulling the rug from underneath her for the millionth time this series given everything she’s gone through to finally get this project off the ground again.

While the writing at the end has been inconsistent, there are still little golden nuggets of self aware moments. As Jo-geun and Soo-jin meet with investors for the movie, the dialogue about how the country doesn’t like strong willed women running amok onscreen seemed to be a meta dig on the Korean viewers, who weren’t compelled to give Ex-Girlfriend Club a chance. What really gives the show something special compared to other dramas is best described by Jo-geun — these women while strong-willed, all have something in common and it was to find love. These women aren’t just one dimensionally strong-willed, but they have honest intentions. They may at first glance have tough personalities but if you dig deep, there is a quality to be admired about each of them.

The actual ending didn’t have the dramatic weight that the earlier half of the series had. The last major arc involving the Jo-geun, Myeong-soo and Soo-jin triangle kind of fizzled. There were nice callbacks to earlier antics such as when things got to a physical level as Jo-geun and Myeong-soo visit Soo-jin and end up fighting — throwing elbows and biting one another (viewers will recall earlier in the series when all the ex-girlfriends and Myeong-soo got tangled up at MSG). Also, the final dinner scene felt like a gift. The movie production was finally underway and all of them including Young-jae were there to celebrate and throw little quips at one another.

Ex-Girlfriend Club is a case of a drama that suffered because it didn’t get its full episode run. The rather large cast of characters all could have flourished and gained more development with the extra episodes. The plot fell off, trading intricate set ups for quicker shortcuts. Ex-Girlfriend Club takes the viewer on a roller coaster ride. There were memorable moments of twists and turns leading to that one big drop. However, after the drop proves to be not as climactic and the adrenaline wears thin. The ending leaves you wishing for something more powerful to punctuate the series with a last big moment of glory.

All in all, the characters are what make the show. The ex-girlfriend club members are stellar. It’s a shame the show wasn’t centered around them (rather than the Myeong-soo and Soo-jin relationship). It may have made for more exciting plot premises. In the end, the series does leave on a sentimental note with everyone reaching a somewhat happy conclusion.

What are your thoughts on the drama and its ending?