Ex-Girlfriend Club Episodes 5-8: A Man Who Tries to Make Everyone Happy? 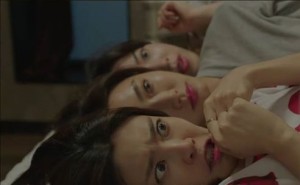 Just as I was questioning everyone’s desires in the first few episodes of Ex-Girlfriend Club, these latest ones did a lot to illuminate everyone’s desires (secret or open) and made quick progress in certain relationships. While there are some irksome character inconsistencies, the quick progression of the plot, some witty self-aware dialogue, and the development of the main relationship are refreshingly well done.

One of the biggest positives is that the writing is getting tighter. Instead of spending time bouncing ideas between one person to another, the three ex-girlfriends, Soo-jin (Song Ji-hyo), and Myeong-soo (Byun Yo-han) literally gathered around a table to discuss what everyone wanted out of this deal, and their next plans of action.

The show has many interesting characters, so it seems the writers figured the best thing to do was to put them in situations together, and figure out how they would react. What results are verbal battles and circuitous reasoning that sees everyone dancing around the taboo topics like Myeong-soo’s prior relationship with Hwa-yeong (Lee Yoon-ji) and the relationship they all share with him. For example, the dinner at Director Young-jae’s team building retreat lead to a ridiculous story about Ra Ra (Ryu Hwa-young) and Hwa-yeong’s school friendship, which is subsequently explained away by their shared interests in the same man – who they pulled each other’s hair to go after (ironic because they also pulled each other’s hair because of Myeong-soo). These little tidbits round out the unexpected directions each character takes. Each person is essentially a wildcard in play, and what they’ll say or accidentally slip up on is anybody’s guess.

However, my favorite parts of the show are in its earnest moments. They can be cheesy, but with the show’s self-awareness of those moments, it gets executed rather nicely. The writers have this keen ability to twist more comedic moments on its head to drive a key character development or plot point in.

Unfortunately, there are some negative aspects. As much as I don’t want to admit it, it would have to be with the the antagonists. The three ex-girlfriends who seemed promising characters at first, have now been grouped together and may be losing a hold of their identities. They’ve officially been dubbed the ex-girlfriend club – set for destroying Myeong-soo and Soo-jin’s burgeoning relationship. 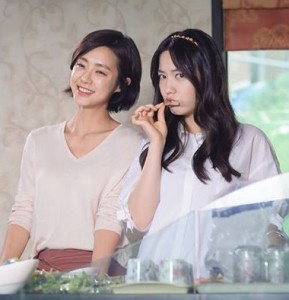 Ra Ra seems to be the least interested in messing with the two because she’s interested in Jo-geun (who may have his heart set on Soo-jin). Her character still has some depth and complexity to it. For someone who puts on a front of self-confidence, she resorts to tricks (such as seduction) to get her way. When she’s called out for it, we get to see that fragile shell come down a bit. I don’t really fancy her with Jo-geun. Ra Ra is a confident character, and although it was Jo-geun’s words that woke her up, she gets caught up in the ex-girlfriend club and almost blindly follows the two other ex-girlfriends.

Hwa-yeong’s character frustrates me. Why does she want to meddle in Myeong-soo’s future relationships? Her character’s actions were previously motivated by her impending nuptials to Young-jae, so why bother with her ex? It seems a stretch to have her continue to pull strings when Myeong-soo has already removed himself from the movie’s production.

Lastly, Na Ji-ah (Jang Ji-eun) continues to be one of the biggest obstacles to Soo-jin and Myeong-soo’s relationship. I felt like she still harbored the most residual feelings towards Myeong-soo, and it is definitely a red flag now. We can see her take advantage of Myeong-soo’s nice guy qualities when she asks him to help her out with fixing things. However, I wish we could get deeper in her mind and heart. Why did she previously get wed to someone else if she really did love Myeong-soo? I want to understand her, but right now, she just seems to be selfishly trying to work her way back into Myeong-soo’s good graces instead of being more direct and honest with him.

The last real wildcard is Jo-geun. His character is supposed to be the other love interest for Soo-jin, but I never get the feeling that Soo-jin has any real romantic interest in him. Even though the characters all try to keep him out of the loop, he is quite keen and sees through any charade rather quickly. If we look at it objectively, he does have honest intentions. He wants to make sure his friend Young-jae does not get deceived, and he wants to direct a movie he is passionate about. For now, he seems more like a plot device – someone the characters want to keep pacified — and less like someone who will play a bigger role. 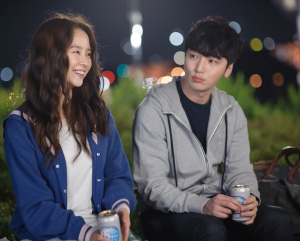 Now, onto the two main characters. Last time, I questioned Myeong-soo’s motivations, but now it’s clear. He had real feelings for Soo-jin in the past. He recalled a moment that didn’t come to fruition – “if I hadn’t kissed her then, we would have remained just friends.” There’s a tension and real honesty to the story when juxtaposed against the often offbeat humorous tone. Amidst their tangle of dodging Director Jo-geun’s sharply directed barbs, the most apt defense seems to be an unexpected honesty.  Myeong-soo’s character has come a long way from nice guy player pushover to honest romantic interest. He still seems to have an air of mystery to him – possibly a shadow cast from the mountain of baggage he has — because of his complicated relationship history.

Soo-jin has also grown a lot from when we last saw her. We see her doing what she’s best at – producing a movie. She location scouts, fields calls from vendors, and organizes the production schedule. Her character also struggles to deal with this budding relationship with Myeong-soo which seems like new water to her. Myeong-soo and Soo-jin have more real world hurdles to get past outside of the ex-girlfriend club and Jo-geun. Soo-jin lives a hectic lifestyle with her job, and she doesn’t have much time for love – much like how she was three years ago. She’s undergoing a great learning experience, and it’ll be exciting to see how she’ll reconcile the relationship woes with her tough job life.

Unfortunately, the drama ratings seem to be fluctuating (for the worse). Maybe with the faster-paced story and positive word of mouth, the ratings will make a rebound. Hopefully, the writing for the ex-girlfriends will also start to regain some consistency and add more depth to their characters. Side note, the music is hitting all the right notes (that Vodka Rain song sets a perfect contemplative/sentimental tone).

What do you think about Myeong-soo and Soo-jin’s relationship? Which member of the ex-girlfriends club do find most compelling? Is Jo-geun sincerely interested in Soo-jin? Did you laugh as hard as I did when Na Ji-ah delivered the punchline to the titled question?