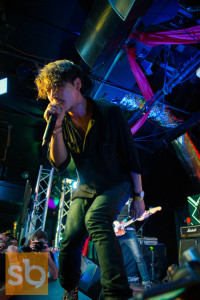 South by Southwest (SXSW), the annual music, film and interactive festival that takes places in Austin, Texas, is unlike any other festival or conference in more ways than one. With regards to music in particular, few places exist where people with such a wide variety of interests would ever converge, but SXSW creates that environment as it has always been the place to find burgeoning, undiscovered talent in all genres. Thus, this cradle for underground artists is the ideal place to discover a taste for music one has never considered, even foreign music as SXSW invites artists from all over the world to perform.

With the ever-growing interest in Korea’s music scene, SXSW’s decision to organize not one, but two showcases of Korean music, the first of which was its annual K-pop Night Out, is unsurprising. And while this night has excited many a K-pop fan and been an incredible success since its inception, SXSW should consider renaming the event in the future. With few exceptions (note: one), none of the seven acts that performed were actually K-pop, making the showcase’s title a misnomer.

Despite its misleading name, K-pop Night Out was undoubtedly a party with charismatic performers, a fully engaged audience and, most importantly, fantastic music that spanned so many genres beyond pop, including garage rock, EDM, hip hop and doo-wop. 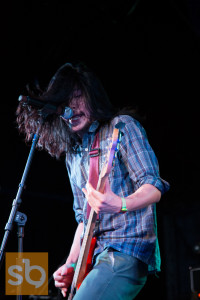 The night opened with Eastern Sidekick, an indie garage rock band that has drawn frequent comparisons to The Strokes. This five-piece band had the task of setting the mood for the night, and it might have been a difficult one for other artists, but not for Eastern Sidekick. A bit slow to start, they went into full swing with the distorted guitar and hard drums signature to the genre. They performed a number of songs, but their best was definitely “Fight for Rainbow” with its revving guitar and fast-paced irresistible beat. By the end of their set, the audience was wild, and when vocalist Oh Ju-hwan jumped into the crowd and returned to the stage with a cowboy hat, it sealed the deal: Eastern Sidekick was a name to know.

Following such a strong start was Asian Chairshot. Sadly, the energy dipped through their set, not due to the artist but due to the audience, as they seemed surprised at this trio. While they look like the standard rock outfit, they favor a more experimental sound that brings to mind that of Mars Volta. With hypnotizing guitar riffs, haunting vocals and hard-driving bass and drums, Asian Chairshot’s set was definitely a departure from the pop that might have appealed to this audience. Nevertheless, their performance was on point as they displayed such focus on their music. They were nothing but energy and hair as they closed their eyes and lost themselves in their music, almost physically leaning into their detailed psychedelic sound. I found myself lost in the spiraling performance of “Lord of the Basement.” 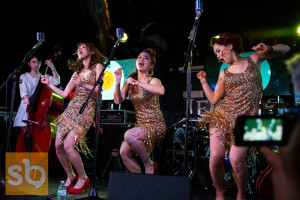 Making a shift, The Barberettes, whom we’ve discussed on the site before, took the stage with their revival of doo-wop of the 1950s and ’60s, complete with an upright bass. With their voluminous bouffants, gold sequin dresses and red suede heels with matching lipstick, this trio has found its match in doo-wop not because of the era’s styling, but because of its emphasis on vocals.

With colorful timbres and a variety of ranges, they clearly have worked on how to best fit their voices together. Sometimes one takes the lead, and in others they focus on their harmonies. This balance made their performance an absolute aural pleasure, from their original tracks to their covers, my personal favorite being, “봄맞이,” their homage to the Kim Sisters. Despite slowing down the pace of their music, it was clearly an emotional song, as they mentioned that the Kim Sisters were actually their inspiration to get together. 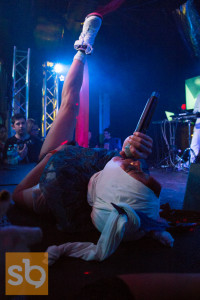 The show made another genre jump when art performance group EE — or EE [Total Art], as they prefer to be known — took the stage. Composed of a husband and wife team, EE is undoubtedly bizarre. With glitter body paint, costumes of feathers and all white and contortionist choreography, their set had all the makings of something weird and off-putting, especially before this pop-enthused crowd, but what makes EE so incredible is how engaging they are.

After a few songs, the audience was wild for them, dancing and jumping to their music, a creative blend of electronic, hip-hop, rock and other sounds that could only work for them, and it’s all because of how fun and funny they are. They went from bouncing around and teasing each other to sprawling out on the stage and playing with their props. One of the highlights of their set was “Wiggy Dawn,” an electro-hip hop rave of a track that just begs to be chanted, but I think the best moment was when nearly everyone on stage jumped into the crowd and danced with them. 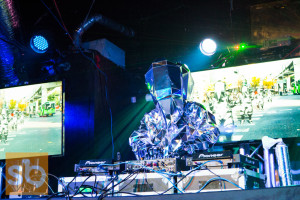 The perfect follow-up to this fun kind of crazy, Hitchhiker, who made waves with his music video for “11” last year, truly turned the night into a party. In his prismatic silver suit, this DJ/producer opened with his “11” and never stopped pounding out bass-heavy sampled mixes. While his suit impeded direct contact with the audience via voice or even eye contact, Hitchhiker managed to forge a great connection with the crowd. With just a few waves and other gestures, he had the crowd bouncing up and down and pumping their hands in time with the beat. 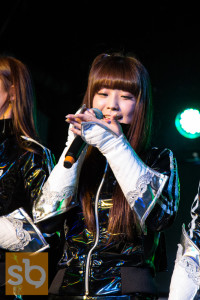 Before even beginning, Crayon Pop was driving the crowd insane. Their tracks “Bar Bar Bar” and “Uh-ee” played through the venue as staff prepared for their set, and the audience chanted and danced with each song. When they finally took the stage, bringing the only actual pop of the night, the audience was bouncing with excitement. In their black patent track suits and heeled boots, the quintet definitely stood out, compared to previous performers, but they put on a great show.

They adorably tried their hardest to connect with the English-speaking audience and memorized plenty of English — they even wrote phrases on their hands to make sure they remembered. After pleasing the crowd with their recent tracks, they debuted their latest single “FM” with detailed choreography to boot (pun intended) and ended the night with viral hit “Bar Bar Bar,” of course donning their helmets for this final performance.

One might find it difficult to follow up such a crowd pleaser of a set, but Epik High did it easily. In fact, it was quite obvious when DJ Tukutz took the stage during setup that the majority of the audience was there for the hip-hop trio. While the audience may have been more than enthusiastic for the previous performers, they were out of control for Epik High, with the crowd pushing and shoving their way to the front to get as close to the performers as possible. 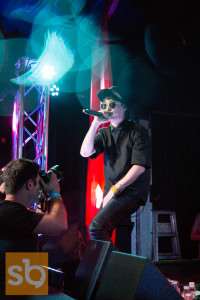 In response, Tablo and Mithra Jin were just as wild, throwing water at the crowd, taking selcas on phones they grabbed from reaching hands and even doing shots of soju, one of which even resulted in a broken glass. Tukutz came out from behind his mixing station to fill in some parts on tracks that had featured artists and engaged with the audience just as much as the other two. Performing tracks from their last album Shoebox and beyond, my favorite being “부르즈 할리파” with its high energy and fantastic live mixing, Epik High gave the crowd an experience they would never forget.

Overall, SXSW K-pop Night Out was, in a word, fun. The performers were beyond energetic, and the audience reciprocated. It didn’t matter if anyone was new to any of this music because the energy was so inviting and addicting that one would be hard pressed to find anyone who didn’t have a great time. It was just that amazing.

We’ll be posting our video recap of both Korean music nights of SXSW in our review of the second night, Seoulsonic, so be on the lookout for it along with more photos from K-pop Night Out on Tumblr.