Going Back to the 1950s with The Barberettes 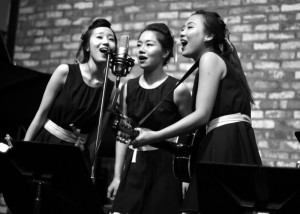 Self-described as a “time travelling girl group that sings ’50s-’60s American and Korean pop music,” one might be forgiven for the initial impression that The Barberettes have mashed two popular concepts in K-pop — time travel and retro — for gimmicky value. However, upon listening to  the eponymous “The Barberettes Volume 1,”  I am never happier to have been proven wrong. The dedication to their concept as a “1950s girl group” is complete, from styling to recording, to the doo-wop sound delivered by the trio. The end result is that of an album that captures perfectly the nostalgia for a bygone era, replete with smoky vocals, red lipstick, and the curious crackling one often hears in old recordings.

Comprising Shinae An Wheeler, Grace Kim and So-hee Park, the Barberettes only came into being in 2012. Prior to recording their debut album, the trio covered countless classics originally performed by acts that have inspired the group — one such classic is “Be My Baby” by The Ronettes. With their first album, the trio has not strayed far from the sound they’ve established for themselves.

The album opens with “Little Gals”, an original song composed by Shinae An. In this track, several elements of the Barberettes’ style is introduced. For instance, there’s the use of the jazz piano to embellish the trio’s harmonies with little riffs; then there’s the syrupy harmony between the three vocalists; and there’s also the walking bass line that forms the backbone of the track’s rhythmic progression. To top it off, there is even a delightfully retro MV to accompany the track, featuring the Barberettes at various locations dressed in ’50s garb. The MV also ensures that the audience does not forget that the audience is listening to a Korean group; the choice of hanboks as costumes, as well as the various backdrops using traditional Korean architecture, add a sense of visual juxtaposition to the other scenes in the MV.

“Little Gals” is followed by “Kukerichoo”, and the momentum of the album is set in motion with this track. The faster tempo immediately sets a pace dissimilar to that of “Little Gals”. The track was given to the trio by the British jazz singer Cousin Alice, and rearranged into a harmony tune by the trio. While the instrumentation of this track is more complex compared to that of the first song — there’s the addition of a piano solo — it doesn’t overpower the vocals of the trio. The girls take turns trading off solo lines, and they harmonise with such deft finesse that the track flies by in no time at all.

“Summer Night Wind”, on the other hand, is an a capella performance that highlights the trio’s technical precision. The song reflects Shinae An’s one particular sentiment: that “energy of human voices singing in harmony is so powerful that no instrument can ever do the same.” Coming in at a short 1 minute 18 seconds, it’s practically an aural version of a palate cleanser that allows the listener to appreciate the pure vocality of the group, before segueing straight into “Summer Night Dream.”

“Summer Night Dream” is unashamedly and unabashedly inspired by its 1950s counterparts. The addition of stringed instrumentation doubtlessly adds to the lush, almost-saccharine feel of the track. Notably however, the bulk of the harmonisation is still done by the vocalists, with the violin only coming in to supply a counter-melody to the main melody sung by the soloist.

“Spring’s Greeting” is perhaps the standout track of the album. Billed as a homage to the Kim Sisters, the track manages to retain the by-now signature ’50s sound imbuing the album. But instead of paying homage to the American jazz and doo-wop of the 1950s, “Spring’s Greeting” is a tribute to the Korean pop music of the 1950s. The original was notable for including elements of traditional Korean melodies despite using an entirely classical Western ensemble. In the Barberettes’ version, the instrumentation is stripped down to a guitar solo with occasional percussion, and the trio once again showcases their vocal prowess, harmonising and performing together without having any particular vocalist overpower the others.

After the restrained performance in “Spring’s Greeting”, “When It’s Rainin’” once again picks up the momentum of the album with its percussive beats and powerful vocals. Structurally, the track is probably the most interesting in the entire album. Rather than the usual repeated verses and choruses, the relatively long introduction featuring just the vocals and percussion is gradually layered on with each verse — first with more complex percussion and harmonisation, then a bass, which segues into a full-out musical segment where a sly reference to “Rockin’ Robin” is included, before dropping back into a faster version of the beginning vocal/percussion combination. 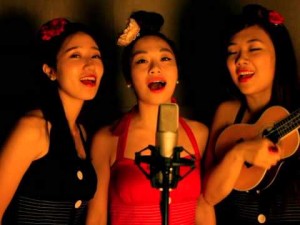 Following the excitement of “When It’s Rainin’” is “Thoughts in Love”, which brings back the mellow, sentimental feel of the album. This track brings to mind easily the jazzy, lounge-like feeling it is meant to evoke; Shinae, accompanied by a suitably restrained piano, delivers most of the solo lines with her low, husky vocals.

The penultimate track “Mrs Lonely” is reminiscent of “Summer Night Dream” in style, reminding the listener again of the era and music the Barberettes are inspired by. Again Shinae gets to shine, although her fellow Barberettes do a no less masterful job of matching her with their harmonisation. An English version of “Kukerichoo” ends the album. Despite it being a song already heard on the album, the choice to make it the last track ensures that the album does not peter out into a syrupy stagnancy with two slow-moving ballads in a row.

Overall, “The Barberettes Volume 1” is a strong debut album that makes one excited to think of what else the trio might produce in the coming years. Most significantly, it is an example of a concept done right. Be it the dedication to the style of music of the era it harkens back to, the choice to record all the songs “old-school style” (i.e. one take, no autotune) and the retro outfits the Barberettes perform in, in a time when concept is more or less gimmick, the Barberettes prove that one can take a concept as outrageous as “time travelling 1950s girl group” and execute it nigh perfectly.

Perhaps the cover art for the album illustrates the central concept of the trio most fittingly — despite the obvious modeling after Audrey Hepburn in Breakfast at Tiffany’s, the outfits are nevertheless updated with each of the members holding an iPod, champagne flute and coffee cup respectively. In retrospect, this makes an apt visual representation of what the trio does. The timeless and the new are combined in a way that’s nostalgic and refreshing at the same time.

How do The Barberettes fare? Are they right up your alley? Tell us in the comments section below! 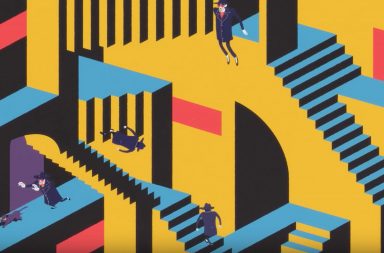 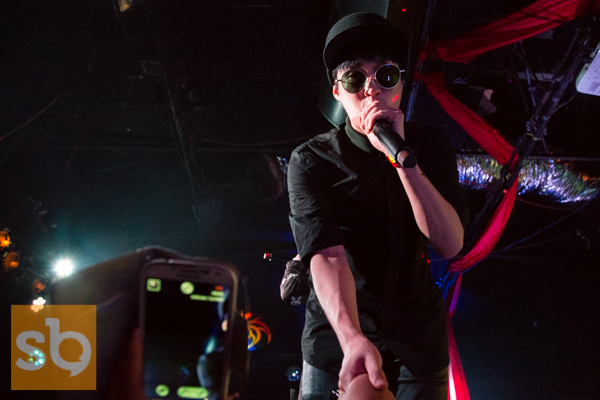