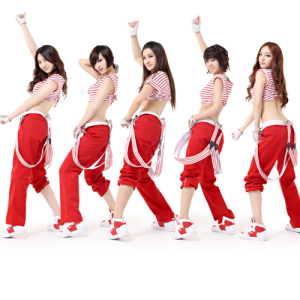 KARA is a group that has been present in K-pop in all its various forms for a very long time and on the 29th March the group is going to celebrate its 8th anniversary. In honor of the group’s birthday, I thought it would be a good idea to look back at the song that boosted their career to new heights by starting a dance phenomenon.

“Mister” is from the group’s 2nd Album, Revolution, which was released in 2009. It is one of the songs that defined the late 2000s for K-pop; It’s right up there with fellow 2009 releases, Girl’s Generation’s “Gee” and Super Junior’s “Sorry Sorry”. The song was promoted alongside the lead single, “Wanna”, but ultimately became more popular due to it’s catchy tune and signature ‘butt dance’.

It’s the song that defines the ‘Butt Dance’ category that has grown infinitely in the past few years with releases like Girl’s Day’s “Expectation” and A Pinks’s “No No No”. The dance move in question was , of course, the butt wave that occurs with the chorus of ‘lalala’. It became a sensation and possibly made suspenders cool again. If you didn’t know how popular this dance was, I think only Big Bang’s Daesung’s rendition should be enough to prove it to you; That boys hips know no bounds.

The catchy song is easily defined by the ‘lalala’ theme that will suck you in from the very start. If you don’t find yourself at least humming the tune after listening to the song, I would tend to believe that you have super powers. The entire song is based around getting someone’s attention, so how could you resist?  I mean, the signature lyrics are,

Even though the song is set up for a girl to get attention from a guy, they definitely did something right with this song because they practically got everyone’s attention.

The song ultimately became a hit in Korea and in Japan, at their debut in 2010. It wasn’t until the group made its Japanese debut that “Mister” got the MV it deserved. In Japan, the single debuted at number five on the Oricon singles chart. If there was any indication of the success KARA would be going to achieve in Japan in the future that would be it.

There are two things I like to see in female groups: diversity and growth, and those are something I think KARA has been able to portray in its 8 active years. They have created their own identity apart from the normal concepts. This does not mean they did not start by using concepts. “Mister” was ultimately the song that allowed KARA to move away from the cute image they started with releases like “Rock U” and “Honey”. It skyrocketed their popularity, which was further backed up by its later releases of “Jumping” and “Lupin“. Today, they can still pull of cute, sexy and just ‘plain’ awesome.

Even though KARA lost two members in 2014, Nicole and Ji-young, it still looks like they have a long run ahead of them, with them gaining one new member, Heo Young-ji, through the KARA Project. Young-ji and the rest of the Project girls proved they could perform “Mister”. So, the future of KARA seems safe within Young-ji hands, proved by her eagerness to delight anyone with a performance of their most recent release “Mama Mia” on the variety show, Roommate.

This does not mean that previous members Nicole and Ji-young are no longer working, Nicole had a successful solo debut and Ji-young made her acting debut in Japan. So with the group still standing with members Park Gyu-ri, Goo Ha-ra, Han Seung-hyeon and Young-ji, here’s to hoping KARA has many more successful years to come!

So what’s your favorite KARA song?