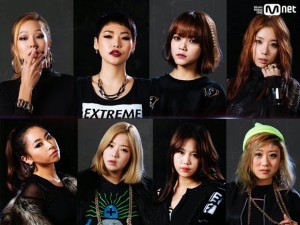 Episodes 4-6 of Unpretty Rapstar were certainly the most interesting thus far. This is where things start to get down to the nitty-gritty, and with that comes a lot of beef and a lot of incredible rapping. From episode 4 we can see that Jolly V and Tymee’s rivalry is going to come to a head, and boy did it ever. Beyond that, we get a few surprises, not the least of which is a new rapper joining the ladies more than halfway through the show.

We begin episode 4 watching the last performance to decide who between Jimin and Tymee is going to get Track 5, produced by Verbal Jint, a rap/R&B collaboration with Im Seoulong (with a sample of Raheem DeVaughn’s “Guess Who Loves You More” — which is a re-imagining of Earth, Wind & Fire’s “Can’t Hide Love”—by the way. Nicely done, Jint). Unlike the previous on-stage collaboration between Cheetah and Jessi, I wasn’t at all sure who I was going to favor on the outset of this stage. At this point in watching the show, Jimin hasn’t impressed me, and I’m starting to really get irked whenever Tymee’s on screen.

This is my problem with Tymee. She has all this ego but a) has nothing to show for it, and b) can’t back it up. What respect I may have had for her at some point between SMTM3 and now disappeared the minute she started to make excuses about not having something prepared to show the judges. For someone who claims everyone is attempting to ride her coattails (namely her arch-rival, Jolly V), coming to a battle stage without having something prepared is inexcusable. That’s literally your only job: come prepared to spit at all times. However, I’ll admit I’m starting to warm up to Jimin. She does know how to write interesting lyrics; I’ll give her that much. In the end, she well deserved her victory. 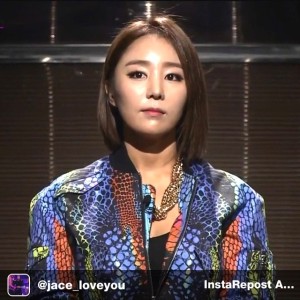 Then came the plot twist: a new rapper joining the current cast: Jace from group Miss $, who I admittedly know nothing about, but if their representative for Unpretty Rapstar is any indication, I’m best not finding out. Home girl came in lookin’ mean, though! As if she was ready to eat everybody up! Alas, she sniffed the competition and got a stomach ache. More on this unfortunate soul later.

Episode 4 was also the moment I’d been waiting for since the show started: a good old-fashioned battle rap! The producers they’re vying to work for are verifiable legends: MC Meta and Nuck from Soul Dive. Surely any flaws or weaknesses in your style, flow, or lyricism are going to be exposed when it’s one-on-one. Therefore, I was immediately expecting L’il Cham to be dragged to the ground— some might even say I hoped for it. I got a laugh out of her calling Jessi out because of her “manners.” Excuse me, what manners? This is a rap competition. If you want someone to pat your head when you do poorly and give you a gold star when you do okay, you’d best pack your bags and haul off to Kids Bop Camp.

Jolly V was straight nasty! Indeed, a lot of people, especially female viewers, may have thought she was just vulgar. However, for me she’s got a rawness about her that shows absolute confidence. She’s not afraid to go there, and if nothing else her ability to go heels should inspire her competitors to want to come harder (absolutely no pun intended). Kisum, unfortunately, had the same problem this round that plagued her in SMTM3. She focuses on everything except her rapping. While it broke my heart, like MC Meta said, “If the other rapper isn’t prepared, you have no choice but to eat them alive.”

Though Tymee took the coward’s way out by choosing to battle Jace, it was obvious Jace didn’t belong. Trying to be cute, she got that butt cut. She doesn’t have a lick of battle skill. Tymee was smart going against someone who can’t battle. There weren’t any surprises in Jessi’s battle against L’il Cham. Not only did Cham have no concept of the beat, she didn’t seem to know where she was half the time. I got all kinds of secondhand embarrassment from watching that girl.

Then Queen Cheetah, the badass youngster Jidam, and the idol rapper with everything to prove Jimin. This was probably the most interesting battle from the moment it was called. At the very least we were given three competent rappers. Cheetah outclassed her juniors, but they definitely showed the skills to hang with her.

There’s one thing I’ll say about Unpretty Rapstar: there aren’t many surprises. All the sneaky editing aside, you always know who’s going to win as soon as they hit the stage. As such, not a soul in the world is surprised that L’il Cham got booted off. It was too obvious from the moment the beat dropped. When she said she did her best, I rose up in my seat. If that was your very best, then I feel sorry for you. Her final freestyle gave her a chance, but really, Cham just ain’t good.

During the next team mission, Jessi’s revenge freestyle from episode 2 came back to bite her in the butt. In the subsequent team challenges she continues to say, “we’re a team,” and everyone’s calling her out on it. Now, we all know I’m in Jessi’s corner. But it’s either a competition, or you’re one a team; you can’t have it both ways to suit your needs. As the performances got underway, it was clear Jace was just as useless as Cham was. Easily the next to go, even before these episodes got underway.

But the little sisters of Unpretty Rapstar showed out. Jidam rocked the hell out of the stage. She’s a firecracker. She’s got so much power behind her lyrics that all I want to do is stand up and applaud whenever she’s on stage. Kisum has so much energy and power that she owns whatever she writes. Again, no surprises here, Cheetah won her stage. She’s so overpowering she got a vast majority of the audience vote. It was almost a given Meta would pick Jessi, and obviously the audience agreed. I’m not surprised Jimin made it per audience vote. Her visibility as part of an idol group gives her an obvious advantage during live performances.

Then things got interesting. Before those who didn’t win left the stage, Meta suggested Tymee and Jolly V handle their beef right then and there. Obviously, that’s what people who’ve followed this show (and this rivalry) have wanted to see since it was announced they’d both be on the program. Jolly V’s ready to go for it, but Tymee gets emotional and proclaims she doesn’t want to because Jolly V will trade on her name. Commence the eye-rolling.

Quite frankly, Tymee’s got a lot of punk tendencies. She pretends to have no time for Jolly V, but all I see is fear. If she wasn’t scared she would’ve squashed the shit the first day and made it known she’s the best instead of flinging around this inflated ego. When she started getting live and saying things like, “Do you wanna die?” (to which Jolly V responds, “Why don’t you come and kill me, then?”) I sat there wishing she would start something. This is where I actually started to actively want to drag Tymee by her weave, I’m not even kidding.

When Tymee comes back the next day, she decides to take Meta up on his suggestion, and just like that, Tymee got hers. Yeah, she’s loud and feels like she’s got some chip on her shoulders. But the best she could do was come at Jolly V with a bit of cussing and some grade school name calling. Really, neither one of them is that special, so Tymee just needs to find a stadium and have every single last seat in it.

All the posturing aside, the one-on-one battles were what I came here for! I’m so proud of Kisum. She ate Jessi for lunch! From episode 4 you see Jessi’s caught up in her own strength, coming in blasé and unfocused. As a result, she wasn’t prepared to take on someone whose teeth were sharpened. She took her butt-whoopin’, and Kisum showed she’s on the prowl. Meanwhile, people continue to be surprised because of Jimin’s “idol” status, but as Cheetah said, at this point that shouldn’t even be brought up anymore. Jimin can write and she’s got decent delivery, but that’s her job. Going against Cheetah, she lacked substance for me. Ultimately it was a given Jimin was going to win because she has a pretty face and got a curse word to come out of it.

In the next team mission, two rappers had to work together to create a cohesive performance, and we got a panel of fifteen rappers (underground and legends alike). Though not unexpected, it’s rather disappointing the entire fifteen-member panel was made up entirely of men (a couple were contestants on SMTM3). Did they even consider asking any female rappers to join the panel? Tasha made it clear she didn’t want to participate, but I find it hard to believe there weren’t two or three females who could serve on a panel judging females. Off the top of my head — Gilme, Miryo, Lexy, Steady B, Kasper. Y’all couldn’t make a phone call to at least one of these ladies?

Jidam and Jessi’s performance didn’t disappoint. Jidam, the girl’s just raw. Her lyrics always come from a place you know is sincere. Kisum is another one I’m in love with. Her ability to go in always impresses me. As expected, she and Jimin gave a cutesy performance, and the men really got into it. I really enjoyed their energy and teamwork, but if we’re talking sheer impact, it goes to Jessi and my baby, Jidam. This was the first time I’ve watched Tymee and thought, “She’s actually a decent rapper.” This is also the first time between her and Jolly V I actually found her superior. Jace, however, is actually so useless it’s painful. Unfortunately, Cheetah was paired with a partner who spent her day messing around. As a result, the performance was complete rubbish because Jolly V decided to act a fool.

I was (pleasantly) surprised Jessi and Jidam won. The crowd was obviously won over by the cuteness of Jimin and Kisum, but as P-type said, one word came to mind during Jessi and Jidam’s performance: hip-hop. Meanwhile, it could’ve gone either way in terms of who was going home, but in the end Jace was just so bad she got herself and Tymee booted. Tymee actually rapped very well this round, so it’s a shame. Of course, what’s an episode without some drama? This time it comes courtesy of Jessi. She’d been put-off from the beginning of Kisum and Jimin’s performance. Here’s the thing. Her attitude about hip-hop is understandable; even her opinion about Jimin and Kisum’s stage, I get. But it was completely unnecessary to intentionally make them feel bad about beating the inferior team. It was hurtful and completely uncool.

As the show reaches its end, the rappers who I feel strongest about haven’t really changed that much. Cheetah is queen; Jidam is my baby girl; and Kisum is just fire. I’m majorly rooting for the babies of the show, though. They have such a good chance of blowing people away in the final two episodes. Their energy and greenness make them hungry and ready to go to war, and I can’t wait to see the slaughter!