F.T. Island Announces "I Will" Make a Comeback 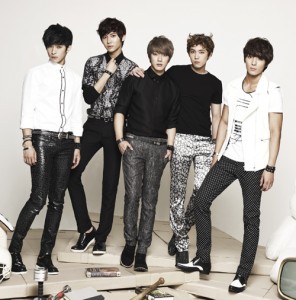 Guess who is making a comeback? Primadonnas everywhere can rejoice because the men of Five Treasure Island, better known as F.T. Island, are returning with an album on March 23.

The news was announced via their website, which shows a blurry teaser image of the group. They have their backs towards the camera, shrouding fans in more mystery over their concept. Their fifth album has a title that suggests they are determined to make this one their best: I Will. The last album, The Mood, was released in 2013 and featured the hit song “Madly“. The members have been touring globally during their interim, visiting cities in Europe, North and South America.

FNC Entertainment appears to be rotating group promotions with individual ones, as label mate CN Blue members Jonghyun and Yonghwa venture out with their own projects. Yonghwa enjoyed a successful promotional run as a soloist with his album One Fine Day. Jonghyun will become a virtual husband for We Got Married, just like fellow member Yonghwa and label mate Lee Hongki did on their respective seasons of the popular show.

It’s been a long time since our last F.T. Island fix, but all good things come to those who wait. Are you excited by the news? Comment below!