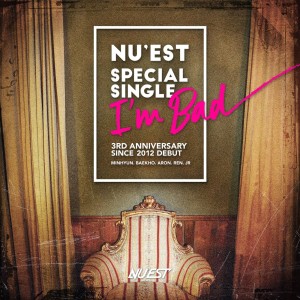 Just a while ago, the K-pop music scene seemed to have reached its saturation point with a slew of bright-eyed rookies looking to make a name for themselves in the market, whether as power vocal soloists or supernaturals from another planet. But this year marks junior year for all the artists who debuted in 2012, and three years is a long time for any group to experience unexpected fame or failure. For NU’EST, March 15 marks their third debut anniversary. To celebrate the milestone, the group has released a special single album I’m Bad.

The album contains two songs: “A Scene Without You” and title track “I’m Bad.” Noticeably missing from the songs is main vocalist Baekho, who had vocal nodes removed during the time of recording. According to Pledis Entertainment, the album and accompanying music video were intended as a gift for fans.

Musically, the single “I’m Bad” is far removed from the “urban electro” sound that NU’EST first forged during their “Face” or “Action” eras and aligns more with the group’s most recent release “Good Bye Bye.” “I’m Bad” has a jazzier vibe and features saxophone, drums and twangy electric guitar together in one smoothly layered backing track. The instrumentals give the song a light tone, weighted down only by the lyrics which speak of regret for hurting an ex-lover.

In regards to the music video, there isn’t much to analyze. The members take turns gazing at the camera, their remorseful expressions interspersed with shots of a girl in black, dancing. There doesn’t seem to be any connection between the ballerina or the boys, and the entire video is simply an opportunity for eyecandy disguised as an artistic video. 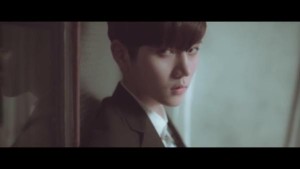 And that’s fine — the video was shot as a fanservice of sorts, and the song was never intended to be promoted — but, at the same time, the music video feels like something of a letdown, especially because “I’m Bad” is actually a solid track and more put-together than some other promoted singles, “Sleep Talking,” in particular. A narrative would have enhanced the song’s feelings of remorse and resignation more effectively than just having the members look dejected for the video’s duration. Even simply showing a connection between the female dancer and the members would have made the music video more cohesive. The girl’s dancing could have been portrayed as a sign of her moving on from the bad relationship and heartbreak in the song.

Three years is a tricky period of time to promote: it’s long enough for a group to achieve explosive popularity or build a steady fanbase, but not nearly long enough that a group can’t fall apart. While NU’EST has dodged the extreme situations experienced by peers such as Exo or B.A.P, they’ve also sort of fallen from public attention. Much has been written here on Seoulbeats regarding NU’EST and Pledis Entertainment, but most recently the group’s full length album Re:BIRTH failed to make waves on any of the major music charts. The group spent much of the past year promoting overseas, but to little avail. Chinese promotions as NU’EST-M amounted only to performances with additional member Jason, who was later rumored to have left the partnership project. Currently, the group is concentrating on Japanese activities, releasing the fluffy Christmas single “Shalala Ring” in December and recently a comeback teaser for the song “Na.Na.Na.,” due out in May. 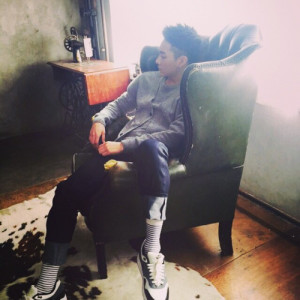 For now, NU’EST have already expressed their intention to keep the softer pop sound established in “Good Bye Bye,” and “I’m Bad” aligns with this new musical identity. Throughout the course of their career, the group has experimented with a variety of musical concepts, though they’ve met the most success with their debut “Face.” Despite originally debuting with a social issues angle and edgy vibe, the members seem to be moving towards a more mature image these days.

At this point, bemoaning the end of the “Face” era is equivalent to beating a dead horse; no artist is expected to stay stagnant for the whole of his or her career. What NU’EST needs if the group intends to see their fourth anniversary is to re-establish a unique musical identity and keep to it this time, rather than toying with new and meaningless terms such as “mystic fantasy” with every return. NU’EST have already proven that they have the foundations for a change of sound with their most recent discography, so here’s hoping they find their much-needed niche in the music industry, and soon. “I’m Bad” is not the NU’EST of dubstep dance breaks or hard-hitting electronic music, but the song is good for a listen and even better if one goes in without expectations.