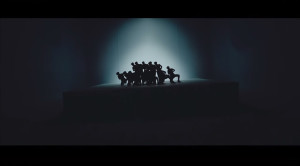 Where exactly does one start when talking about Shinhwa? The group has been together for almost seventeen years and has a unity that’s become as legendary as the group itself. So whenever the group releases new music, every single person who has a stake in K-pop scrambles to see just what every idol’s idol has in store. There hasn’t been a single endeavor since they founded Shinhwa Company that’s been disappointing, and “Sniper” is no exception.

Before we can even get into the pure epic nature of the music video, we should dissect the song a bit. Starting from the music, there’s a mysterious sensuality to the single. Beginning with sparse whistles, we get a bit of the now renowned cheekiness of the group, a challenge to every corner of the K-pop universe that everyone is eager to take on. From there, we get broken-beat R&B, typical of New Jack Swing, and vocals as tightly woven as the bonds that tie the six members together. The lyrics are incredibly telling, if not exactly what we thought they were: each member takes his turn explaining how they’re going to basically shoot us through the hearts, trapping us under their spell and never letting go. I’d say mission accomplished, fellas.

The MV is an experience in and of itself. There’s so much to admire here. Every time you look at the screen you’re looking at something beautiful and flawless. We open up with Eric lighting a match, then blowing it out on the first piercing whistle. The camera pans over to different scenes with each character, seemingly in an area matching their personality, or at least their means of entrapping us: 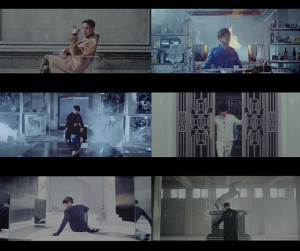 Dong-wan is an industrial kitchen that’s in a state of disarray, the pans aflame, the steel table in front of him cluttered; Jun Jin is in a room of broken mirrors, the plaster on the walls crackling and pieces of glass littering the floor; Hye-sung opens a white patterned door to what seems to be this mansion’s foyer, all clad in white, surrounded by marble and alabaster; Min-woo is in a great hall, the mirrors in his area pristine and showing him at all angles; Andy is in a showroom of sorts, standing in front of a statue of black stallion, with an air of arrogance that attests to the entire group’s belief that each member can capture our souls; Eric himself is first seen in a chair, a debonair façade of the classic gentlemen, then moves to what appears to be a bird museum, each bird caught in flight as he walks through with a confident stride in his step.

Each member occupies a room, masters of their respective domains. In each room, there’s a nameless female. As the video progresses, we realize that not only has each woman caught the attention of our leading men, they’ve been observed, for lack of a better word. In Dong-wan’s kitchen the camera focuses on a four-screen monitor. In it we see the sensuous cut of a woman’s figure. While a bit creepy in general, the image of an obsession is undercut by a self-awareness and confidence that suggests this isn’t a man who’s trying to catch a woman: he already has. This observation holds true when we see that each man is actually accompanied by these mysterious females. Each woman’s face is obscured in some way — either with a mask or a blindfold. The men each lovingly caress and cradle the women they’ve got in their possession, as if shielding them from something: either the world or even the prying eyes of everyone else. It’s more than just a need to protect; it’s a need to claim, to hold. 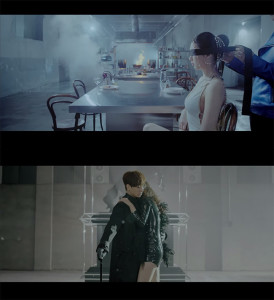 The social implications of this video are almost too obvious to comment on: the idea that man has a right to own and hold in captivity the woman he’s set his sights on. It’s an unfortunate side effect of being too awake in a world that sees women as objects, prizes to be won, trophies to place on a mantel. In a country that’s very patriarchal and entrenched in a constant tug-of-war between the men who run basically everything and the women who spend much of their time reclaiming their independence and womanhood, this video, while just a blip on the radar as far as social commentary, is still indicative of the attitudes that pervade the society.

That being said, there’s nothing inherently disrespectful or even overtly demeaning about the video. The women are drawn to these men, who hold court in isolated rooms of their own creation. Save Hye-sung grabbing at the woman who constantly evades his touch, there’s an amount of awe about each member as he comes in contact with the faceless phantasms that occupy the same space.

Barring any sort of negative feedback regarding the symbolism of the female in this video, the overall treatment is pretty flawless. The fashion is impeccable, the photography is astounding, and the color palette…Don’t even get me started! It’s everything you’d want in a music video from one of K-pop’s most highly respected veteran groups. It’s classy, sexy, and undeniably more mature than what we’d come to expect from their younger peers.

The choreography is crisp, and the execution is that of men honed to understand their bodies and the way they move. As the members dance on a raised platform, reminiscent of music videos of old where dancing was the focus, the lights flicker in and out. Their red suits catch the glint as the white light snaps back to life, while in the semi-darkness each figure cuts a lean silhouette against the back lighting. There’s nothing ostentatious or even remotely overdone. It’s all classic elegance, a description Shinhwa has earned over its time in the industry. 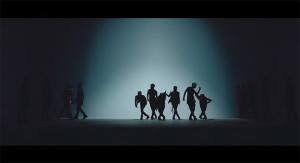 Even being unimpressed with rappers in idol groups, Andy, Jun Jin, and Eric have a smoothness to their delivery and a confidence bred from years of being at the forefront of Korea’s pop scene. Truly, this video, this group will never lose its place in the grander scheme of pop music. When all is said and done, Shinhwa will still be considered one of the most important and marvelously enrapturing groups to ever come out of Korea. “Sniper” is testament to that, and a reminder to all new fans and old-heads alike that Shinhwa are still the best in the business.