Keeping Up With Krishan: Contract Disputes and Lawsuits Galore

In case you had forgotten that former members Luhan and Wu Yi Fan (the artist formerly known as Kris) abandoned their group to start new careers in China and profit off Exo’s hard earned popularity in the name of self-interest, SM Entertainment’s here to remind you once more. Luhan and Wu Yi Fan have made headlines for a variety of reasons in the past few weeks, and coupled alongside the most recent news of the pair’s participation in CCTV’s Spring Gala Festival comes news of fresh lawsuits filed by SM.

SM Entertainment raised a stir after announcing their intention to sue Luhan and an associated advertisement agency on February 5th, having filed the actual suit a day prior to Shanghai courts. In a lengthy press release, SM clarified that the cause of their legal action was due to Luhan’s “illegal activities” conducted in China while still under contract.

The statement did not spare Wu Yi Fan either, as SM decided to capitalize on the opportunity for further condemnation:

Kris (Wu Yi Fan) and Luhan left the team for no valid reason, and as soon as the artist group gained popularity through the efforts of [SM Entertainment], they ignored the contract, ignored trust and ethics, and pursued only individual profits. This is not only an unethical act that throws away the trust of the company and the other members, but also an illegal one.

Until an official ruling had been made, SM claimed, Wu Yi Fan and Luhan’s original contracts calling for SM as their exclusive management company remained valid. With this logic, all the individual activities conducted by the former Exo members, including advertorials, movie roles, and business engagements, would stand as a clear contract violation. The lawsuit stated SM’s hope that these “illegal activities” would cease and involved companies comply to avoid similar prosecution by SM.

In response, Luhan’s side released a statement of their own, calling SM’s lawsuit a legal action made with malicious intent. The first and foremost matter centered on the fact that the lawsuit had been filed to courts in Shanghai rather in Seoul. Chinese courts, in this case, had no jurisdiction over a contract drafted and signed in Korea between Luhan and SM Entertainment.

SM’s claim that Luhan and Wu Yi Fan were conducting “illegal activities” was closed with a simple question: were injunctions issued to them by the court? Standard operating procedure of a contract termination lawsuit typically involves a temporary injunction, allowing the plaintiff to continue personal activities. While neither Luhan nor Wu Yi Fan’s representatives have directly addressed an injunction, the two have continued to promote without a problem in China for months. If an injunction had not been granted to the two men, SM would have pounced (with all legal rights) at the first announcement of Kris’s casting in the movie Somewhere Only We Know. The fact that not so much a peep has been heard from SM about Wu YI Fan and Luhan’s activities in China until only now seems to suggest that some work provision has been set in place by court for both men.

The true conflict, Luhan’s legal team clarified, was simply a copyright issue: one of Luhan’s endorsement companies, Chinese cosmetics brand KanS, had used two photos of Luhan taken for Exo promotions without permission. The lawsuit was later received and confirmed by Shanghai courts as a case of copyright infringement against the parent company of KanS. All other accusations raised by SM Entertainment – insisting that Luhan and Wu Yi Fan left Exo without a valid reason and were now profiting from the group’s popularity for their own personal gain – were deliberately libelous in their attempts to discredit Luhan. 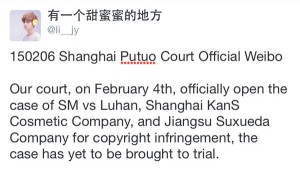 What evidences the lawsuit as media play by SM the most is the timing of this legal action. SM Entertainment and Luhan had already hashed out two court-referred mediations to no avail, with the third mediation marked for February 6th. The lawsuit filing on February 4th and resulting announcement February 5th have raised some eyebrows, with SM’s legal action coming off as a PR move to place some public power back in their court. To the utter surprise of exactly none, no compromise was reached during the third mediation between the two parties.

SM’s lawsuit and accompanying press releases found some success in some of the responses of Korean netizens. Betrayal is bitter, and injunction or not, the lawsuit succeeded in solidifying Luhan and Wu Yi Fan’s image as traitors who’d forsaken the group for greater fame and fortune. The vast majority of Korean commenters sided with SM Entertainment; many calling hypocrisy to Luhan’s accusations of “malicious intent” and accusing Luhan of original ill intent by abandoning Exo in the first place.

In China, however, the lawsuit achieved the opposite of its intended effect. SM, in their attempt to block Luhan and Wu Yi Fan’s activities by issuing threats against Chinese companies, sparked an equally strong nationalistic sentiment from Chinese netizens. Despite the fact that the threats packed little to no power considering the significantly greater influence of Chinese partners and household names such as Baidu and Tencent, SM’s commanding tone and audacity to implicate inoffensive Chinese companies as an intimidation tactic seemed to say that the company was picking a fight with China, rather than just their escaped artists. “You want to bully Chinese kids on Chinese territory?” one commenter wrote, adding, “SM’s pretty brave.”

While SM has effectively killed any possible Korean career opportunities for both Luhan and Wu Yi Fan, the company has also inadvertently risked its own image in the Chinese market by chasing its former artists too far across borders and turning the dispute into an “us or them” conflict by indirectly threatening a few of China’s most prominent mass media and commercial companies. 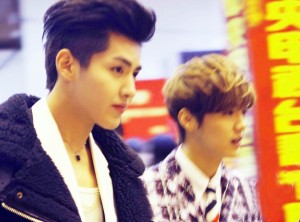 Luhan and Wu Yi Fan’s brief meeting this week at the CCTV Spring Gala Festival rehearsals elicited an equally divisive response from netizens. Regardless, the hashtag #KRISHANDAY began trending on Twitter, and speculation abounded that the meeting, coupled with Luhan’s statement countering the legal debacle, was cause for a temporary dip in SM Entertainment’s stocks. Whether this is simply a rumor or actual truth, the mixed response of those who read the press statements and watch fifteen second long Krishan fancams reflect exactly how shades-of-grey the situation is truly painted.

SM Entertainment’s copyright infringement lawsuit, while manipulative, does accurately reflect the rumbling criticisms regarding Wu Yi Fan and Luhan’s reasons for leaving. Wu Yi Fan’s possible cigarette scandal has brought into question his cited failing health, while both his and Luhan’s busy schedules are believed by critics to contradict their earlier claims of overwork. SM as a corporation is allowed to sue to receive compensation for what it believes has been cheated of such as copyrights and artist investments. However, responses to the lawsuit have also served as a reminder that Luhan and Wu Yi Fan retain rights, as entertainers and employees, to choose exactly where, how, and for whom they will work.

Following news of the KanS lawsuit, SM filed a second suit in Hong Kong courts against Luhan and an involved movie production company, accompanied by a nearly identical statement of illegal celebrity promotions. Given that the new lawsuit’s location remains outside of Korea, it’ll be interesting to see specifically what charges are being leveled against Luhan and the production company. For now, SM maintains that the company is being sued for casting Luhan without their required consent, given Luhan’s exclusive contract with SM.

What happens next is the expected: waiting, and lots of it as Wu Yi Fan and Luhan prepare to enter their fifth and fourth respective mediations. The one certainty in this situation we can safely rely on is the fact that nothing is getting settled anytime soon.

Readers, tell us your thoughts regarding the lawsuits! Does SM have legal grounds to sue, and how will this affect current mediations? And what about the remaining Chinese members of Exo-M?