"Just" Perfection with Zion.T and Crush 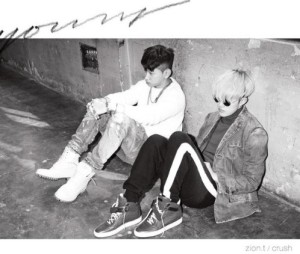 Zion.T and Crush are two of the strongest R&B voices in the k hip-hop industry. The pair recently joined forces for the project entitled Young, and “Just” is the title track from that project. The two are part of the VV:D collective along with Gray, Loco, and Elo. They previously released “Two Melodies” back in 2013. Now, “Just” is topping the charts as the duo sing about the lingering feelings after a relationship.

This year has already seen some great R&B releases with Shinee‘s Jonghyun and G.Soul releasing quality work. “Just” ranks up there as the two are pure storytellers with their voices. What makes these two k hip-hop stars so electric is their smooth voices. They are each masters of their craft and together are near perfect complements of one another.

As previously mentioned, the song talks about relationships and the MV beautifully renders the song in a monochromatic black and white color palette. For such a subdued sounding song, the simplistic color schema is fitting. The lighting plays a huge part in this MV by rounding out the contrast between the crisp shapes on screen with the sound of the song. There is a duality in the imagery, and the coloring of the shots brings out spurts of heightened sentiment. 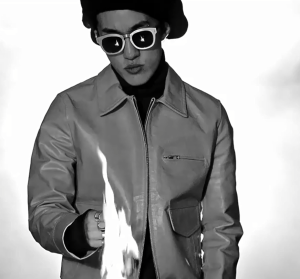 Even in the teaser images for the Young single album, this binary is played up. The color of their hair, shoes, pants, and shirts are divergent. When juxtaposed, the variance reveals how well the two complement each other. Visually and sonically they are like the yin and yang with each artist providing their own sensibility.

The video’s tone has an industrial feeling. The freezing snow storm that falls from the skies across the concrete slabs on the ground and against the smooth window pane of the dark car that Zion.T is sitting inside fills the atmosphere with a quietness. The combination of the environment with the monochromatic colors conveys a subtle remorse.

Furthermore, the combination of elements is seen with the flowers. They were first placed in an glass container filled with ice before bursting out. After that, Zion.T drops the flowers that are engulfed in flames to incinerate on the floor. In another scene, the same type of flowers were laid by a headstone at a cemetery. There were faces hidden under umbrellas in a procession, and among them is AOA‘s Hyejeong. When they placed those flowers on the grave site it represented them moving on from their past relationship much like how one copes with the memory of someone who has passed on.

The differing consequences enacted on these flowers are small clues towards the themes of the song. It seems to represent the severity of moments in their relationships and the stages leading up to relinquishing the attachment to those ties.

A surprising point during the song was Crush’s short rap break. He did a great job with the verse. It had a nice flow and rhythm to it, and the lyrics were poignant about the effects of the past:

“The coldest things you say with no intentions.

I hurt over them secretly, as if it was intended.

It’s not going to work. Obviously, I know.

Pity. I don’t even ask for anymore.”

The undertone of lyrics in the song work well with the stripped down nature of the video. Even with the dancing featured in the MV is well executed. It is showcased during a piano breakdown and presents a mixture of styles. The dancer with the newsboy cap was hitting his groove with the snares during the instrumental bit before twirling in pirouettes to follow along with the piano melody. The musicality was spot on and the effortless shifts in dance genres is mesmerizing to watch.

All in all, Zion.T and Crush make an amazing duo. The two have voices that are simply golden. More than just the smoothness of their inflections, it’s the feeling behind the vocalization. There is a subdued passion that comes through. They aren’t ostentatious when they sing. Rather, it’s the ability to pull off simple modulations that illuminate the complexity of their emotions. The releases in 2015 so far have left me extremely ecstatic, and the bar for the rest of 2015’s music continues to be set at extremely high heights.