Amber Wants You to "Shake That Brass" 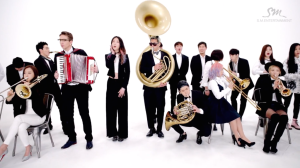 The wait is finally over! Solo Amber has finally hit the K-pop scene with single “Shake That Brass” and her mini album Beautiful. Amber has debuted in true llama style, with a huge group of friends and a music video that makes you want to join in on the fun.

While “Shake That Brass” might not be the best track in terms of arrangement, the music video is a wonderful combination of quirky dancing, abundant cameos and Amber just being, well, Amber.

There are probably even more cameos in the music video that will reveal themselves to me in future watches. It’s great to see SM include non-SM artists in a music video, especially a cast of characters that are personally close with Amber. The crew of idols and actors, instead of taking the attention away from Amber, speak to her outgoing and friendly nature.

After the band starts their warm up, the synth brass line begins, the beat drops and the track and MV really get going. The music video, although atypical in its inclusion of so many non-SM cameos, stays true to SM’s box formula. The MV alternates between scenes of the band, Amber alone with a car,  Amber dancing in another box, Taeyeon (SNSD) in a throne-looking chair, and a basketball court. These sets are full of bright yellows and reds, comic book captions and literal sparkles. It’s dazzling and overwhelming in all the right ways. 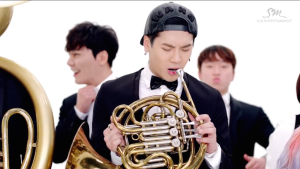 In addition to the group party dynamics, the editing of Amber’s solo scenes is a major strength of the MV as it allows multiple sides of Amber to be conveyed. We are able to see Amber executing challenging choreography one moment, and then three seconds later watch her dance like a complete goof ball in a laundromat.

These quick jumps and contrasting images prevent viewers from taking the MV, or even Amber herself, too seriously. She’s just out to have a good time — whether it be directing a band, playing basketball, dancing, doing her laundry or rolling around on the hood of a car.

In each scene, Amber takes the lead and encourages those around her to join in on the fun. She invades a basketball game where cheerleaders look bored on the sidelines and next thing we know everyone is dancing along with her. Same goes for the band, who begin the music video frustrated but end up letting their troubles go to party with Amber. These little silly moments make the MV feel true to Amber and her character — even with a star-studded cast and over the top visuals, Amber is able to shine as the truly lovable and quirky woman she is.

Another major highlight of the MV is the styling. From Amber’s teal sequined shorts and caution tape belt, to Taeyeon’s cartoon mini dress, the fashion is distinctive and slightly wacky. It fits well with the pop art style of the MV. The fashion combined with the colorful sets make the MV feel like a throwback block party — or a continuation of the party at the end of TaeTiSeo‘s “Holler” MV.

Looking to the track itself, “Shake That Brass” has many distinct segments: we have the two rap verses, the two-part chorus, the pre-bridge and the bridge. Looking at the parts of the song individually, their production is impeccable. The rap verses are layered well over the synth brass and beat. Within these verses, the synth brass arrangement changes subtly and keeps the track interesting — avoiding redundancy even though the same notes are repeating over and over. On top of that, Amber executes her lines with a charisma that demonstrates that she is worthy of rap breaks longer than 15 seconds in each f(x) track. 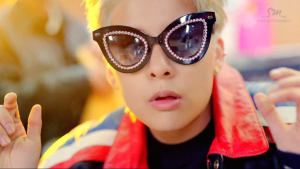 The round-style pre-chorus — reminiscent of “Rum Pum Pum” —  is a great build up for the first half of the chorus. In these segments, the layering of Amber’s rap and Taeyeon’s echo is stellar — the gradual harmonies of the dum dum dums in the second pre-chorus are catchy and help the track gain momentum going into the second chorus. The pre-chorus is also one of the few moments Amber actually sings in the track, and her lower register suits both the harmonies and the heavy brass beat.

However, “Shake that Brass” is best enjoyed with its corresponding music video. When the song is stripped of its visual component, it lacks something. The track sways heavily from being too empty (borderline boring) to moments where the sound is overwhelmingly rich and layered. Listening to “Shake That Brass,” all the individual elements of the song are good in and of themselves — the issue falls more in their arrangement rather than their execution.

The awkward two-part chorus is a bit off-putting through the first couple listens. Instead of a vocal chorus we are presented with two distinct breakdowns: the “hey-ho-hey-ho” bit and the “na-na-na-na” bit. Since these chorus parts lack substantial lyrics — aside from the repetition of “shake that brass” — they, unfortunately, feel slightly empty and drawn out. The na-na-na part especially would make a better hook if it was placed somewhere else in the track, or acted as the only chorus.

This is the biggest impairment to what could have been a wonderful track. The two parts themselves are fun but they don’t need to be heard twice all the way through before the bridge — it’s too drawn out. This becomes especially apparent during the pre-bridge when the song stalls with the repetition of “I want you to” and Taeyeon ad-libs. The extended chorus followed by this awkward lag causes the song to lose too much steam before Taeyeon takes the mic. 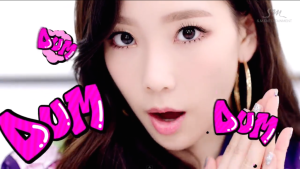 Speaking of Taeyeon, we must ask ourselves, did she overshadow Amber? Perhaps. However, the overshadowing is not a reflection necessarily of either artists’ abilities; rather, it is an issue with the ping-pong arrangement of the vocals. In typical rap/vocal feature combinations, the rapper usually handles the verses, while the vocalist takes the chorus and they come together in the bridge.

“Shake that Brass” strays from this formula: Amber handles the verses, the song lacks a real chorus, and Taeyeon dominates the last 45 seconds of the track. Sure, their lines overlap in the pre-chorus (which may be the best part of the track), but most of the time it feels like the Amber and Taeyeon are playing a game of Marco Polo in the middle of a marching band performance: Amber hollers “Hey” and Taeyeon responds with “yeah,” Amber raps and Taeyeon ad-libs, etc.

The two vocal elements don’t find each other until after the bridge in the final chorus, when the track should be winding down. The music video mirrors this odd disconnect, as Taeyeon is filmed on a completely different set from the rest of the cast until the bridge — she only interacts with Amber in the final 30 seconds of the music video. Taeyeon’s bridge and ad-libs overshadow the track not because of her vocal talent, but because the track was set up too strongly for Taeyeon’s scene-stealing feature and then doesn’t recover. There is only a partial final chorus after her bridge, and then the track ends. It’s too abrupt an ending to bring all the elements together — even with the skillful layering and build-up of the back track. 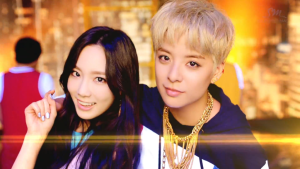 Changing things up isn’t necessarily a bad thing, but the arrangement of “Shake that Brass” acts against the strength of its individual elements — resulting in the whole being less than the sum of its parts. Amber and Taeyeon rock their respective parts; the instrumental arrangement is quite impressive; the hook is memorable enough; the subtle change-ups in brass arrangements that occur in each verse and chorus build towards something. Unfortunately, that ‘something’ the track builds towards ends up being Taeyeon’s bridge and not Amber, or even the final chorus. The song needed about 30 more seconds to re-introduce Amber and weave the Taeyeon-Amber parts together into a cohesive conclusion. “Shake That Brass” has all the elements of a killer pop track, but it’s arranged in a way that makes the song feel unnecessarily disjointed.

Arrangement issues aside, “Shake that Brass” showcases everything we imagine Amber to be: a social butterfly, a huge goof ball and a talented performer to boot. Having already demonstrated her vocal prowess in the pre-release “Beautiful,” “Shake that Brass” serves as a great main introduction of Amber as a solo entertainer. It took a few listens before I was able to enjoy the song for everything it has to offer, but now that I’m past that I can’t help but bounce and sing along as Amber continues to win my heart.

Readers, how do you feel about “Shake That Brass?” Is the Amber solo everything you imagined it to be?