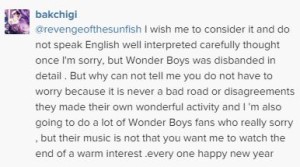 It’s a sad day: it has been revealed that ENT102 Entertainment group, Wonder Boyz, has disbanded.

Former leader, Bakchigi, made the announcement in a comment on his Instagram on January 4th. Although it’s a bit difficult to understand, he did make it clear that the quartet had gone their separate ways. Bakchigi emphasizes that there was no ill will involved and that the members are working and cheering on each other. There seems to have been no comment from their agency confirming the news nor news that they have left the agency.

The news is a bit of a surprise, since the members had performed together back in August at DOC’s Crazy Party.

However, there is no sign the members are no longer pursuing music, which is a good thing. From their social media accounts, the members are continuing to make music. Master One has changed his name stage name to “V.Hawk” and Young Boy appears to like going by “Roscoe” now. Additionally, the pair seems to have teamed up with C-Clown‘s Rome and doing projects with him under D.PR (D.pinkReel — a production group that Rome established).

Hopefully, Bakchigi continues with his acting career — he previously appeared in the sitcom Pure Love. Also, back in October, singer Taehyun (formerly known as K) released a song, “I Know It.” Last month, V.Hawk released the songs “Pupil” and “Rare Steak.”

Wonder Boyz was known for their quirky style and music. Their last MV was the infectiously great “Tarzan,” which was released back in 2013.