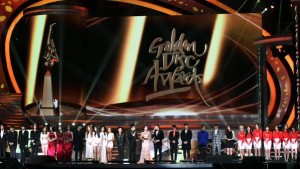 The 29th Golden Disk Awards was held on January 14th and 15th and was aired on the 23rd and 24th on jTBC. The Golden Disk Awards are, at times, considered the Korean equivalent of the Grammy Awards. Instead of judges or votes, the weight of these awards skews in favor of sales volume thus resulting in a large pool of nominees.

This year the awards were held in Beijing, China at the Master Card Center. This is the third time the award show has been held abroad following shows held in Japan and Malaysia in 2012 and 2013, respectively. The first day of the award show focused on the digital side of the industry. The hosts were Miss A’s Fei, Kim Sung-joo, and Kim Jong-kook.

From the start, the award show was rife with issues since performers such as BTS, Beast, two members of Got7 (Bambam and Yugyeom) and Huh Gak were among the artists who could not perform on stage because of various visa issues. However, the award show continued on with performances from those who were honored and with some special stages as well. Something to note was that there were some sound inconsistencies and issues throughout the night.

An early standout is definitely one of the special stages. Hyorin and Junggigo tackled the Eric Benet and Tamia classic “Spend My Life With You.” Hyorin shines in these types of songs. Her voice is full, powerful and arresting. Junggigo also has some excellent runs during their duet. It was one of the better vocals of the night adding subtlety to the singing. Given the steady roll out of duets last year from Starship Entertainment, perhaps Hyorin x Junggigo may be the next to come out with something.

Another great standout from the night was Taeyang. While his performance of “Eyes, Nose, Lips” was solid, I actually preferred the energy from his “Ringa Linga” performance. Taeyang was fluid and commanded the full length of the stage. He also tried to incite some audience participation as he twirled and glided around effortlessly.

Ailee’s performances were on point during these award shows. I really enjoyed the colorful backdrop during “Don’t Touch Me” that featured a bunch of reels showing Ailee singing along to her song. As the backdrop contrasted with the monochromatic color of her and her backup dancers’ outfits, it made for a striking image. Of course, Ailee’s vocals were never upstaged by the stage elements, adding wonderful adlibs at the end of the song.

My favorite performance of the night has to go to Epik High. Their rendition of “Rich” was show stopping. Their rapping was strong, and they truly proved themselves to be veterans of the stage. They know how to work a crowd and get them hyped throughout their performance. Taeyang’s appearance midway only served to enhance an already great showing from the group.

There were a lot of other great performers in addition to the ones I listed. Got7 still did a great job with “Stop Stop It” even though they were down two members. Girls’ Day performed their smash “Something” with an injured Minah belting out the big notes on one side of the stage. K.Will’s “Day 1” was a bright spot during the night, and the Ferris wheel backdrop added visual sense of fun to the festivities. Also, I would be remiss to not mention the Epik High and Ailee special stage. They performed the Jinusean classic “Tell me” and were incredible together.

At the end of the night, the big winner was Taeyang. He took home the digital Daesang for “Eyes, Nose, Lips.” This is the third year in a row that a YG artist has won the digital Daesang after Psy won it the past two years with “Gentleman” and “Gangnam Style.”

Congratulations to all of the winners of the 29th Golden Disk Awards (Day 1)!

Did you watch the show? What did you think of the results and what were your favorite performances?