6 Idols who are Exact Replicates of Other Idols 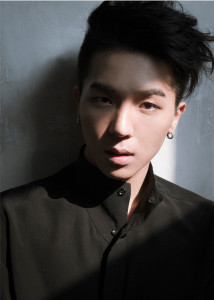 Within the vast sea of K-pop idols, there are times when multiple idols fulfill the same niche. For example, there are several popular idols who play the role of the arrogant rapper and alpha male: G-Dragon, Zico, and Rap Monster, to name a few. There are the princesses who vie for the title of Korea’s national beauty: Yoona, Suzy, and IU being the prime suspects. Of the many archetypes which have been ingrained in the idol industry, a handful has proven to be popular time and again. It is no wonder that newer groups that are attempting to establish a foothold in the industry have designed certain idols to fit an existing archetype to a T.

As we approach what will likely be known as K-pop’s Third Generation, we’re seeing newer idols replicate the formulas of success which have been pioneered by their hoobaes and sunbaes. You may see these junior idols as uncreative copycats or as the second coming of a popular idol. Keep in mind that these aren’t just mere doppelgangers. Other than looking the part, these idols must also play the part, and play it well. They have the ability to immerse themselves in the role so well that you can’t help but be reminded of the muse in which they draw their inspiration from. 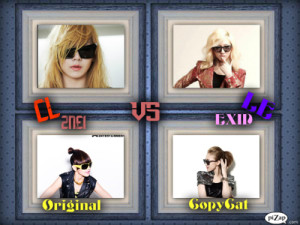 Upon Exid’s debut, the group’s leather-clad rapper drew some very direct comparisons to 2NE1’s baddest female, CL. To be fair, fierce female rapper is such a small niche that any attempt at it will automatically warrant comparisons to CL. However, the way LE was stylized and presented with the oversized sunglasses, bangs, and tough personality only further validated the allegations that this was indeed an intentional ploy to make her the second coming of CL. And to LE’s credit, she lived up to the comparisons rather well. Not only did she nail the look, she had CL’s nasally delivery, her flaunty swag, and just enough of that “Sometimes you gotta act like you don’t care, that’s the only way you boys learn” vibe to bring the impression to life.

Since Exid’s debut, LE has effectively moved away from the CL persona but there’s no doubt that the comparisons still linger. She’s the leader of her reconfigured group, she’s heavily featured in every title track, and there’s no question that her nasally delivery has always been there, long before rapping like CL was a thing.

Right after Exid’s debut, three of its members left the group to reappear in four-member group Bestie. Part of the reason Bestie has been relatively successful in its short time of existence is because the group is really good at imitating existing archetypes and follows a surefire formula of success for girl groups. Bestie is reminiscent of Sistar of yesteryear in which the group heavily relied on frequent promotions, top-notch tracks from the industry’s top freelance hit-makers, and lots of male pandering. If this comparison is in any way valid, then Uji surely has the voice to match Sistar’s most renowned vocalist, Hyorin.

While the physical comparison between the two may not be all there – they’re both relatively tan but Uji has some ground to gain to match Hyorin’s curves – Uji’s vocal ability is certainly up to par with Hyorin. Hyorin has risen to the very pinnacle of the idol vocalist archetype but with further exposure, Uji will not be far behind. Her cover of “Let It Go” shows just how similar the two are in their vocal execution.

Fun fact: Uji, Hyorin, and Jieun of Secret were allegedly supposed to debut as a group under JYP Entertainment. One can only imagine. 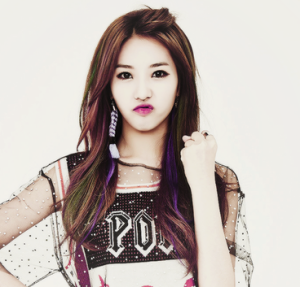 Obviously, Haeryung has a long ways to go before she can even hold a candle to Dara but from what she’s shown so far, it’s quite clear that they’re both cut from the same cloth. Like Dara, Haeryung’s role on the group isn’t to perform; she’s there to make faces. Dara has made a living out of perfecting two facial expressions: the “adorable kid” and the “wrinkled nose.” The cute and fierce dichotomy of Dara can be summarized by these two faces.

Haeryung has those two expressions down pat but she’s still far from reaching the heights of Dara. I imagine her company too sees the potential in her and plans on developing her into the utility idol role, one which appears in dramas, variety, and CFs to draw further attention to the group. Aside from Dara, other well-known utility idols are Sunny of Girls’ Generation and Dasom of Sistar.

Shifting our attention now to the guys, YG’s rookie rapper/composer extraordinaire can’t help but draw comparisons between himself and Big Bang’s front man, G-Dragon. Like GD, Mino also debuted through an elimination-style reality show and is very involved in the production of his group’s music. Allegedly rumored to have been on the pre-debut roster for Block B, Mino has had plenty of time since to further his craft. Upon joining YG, it’s become quite apparent that he draws plenty of inspiration from GD as he showcases all of his suave and swag in the MV for his solo track, “I’m Him.”

Returning to the idea of making faces, Mino has undoubtedly got all the GD expressions nailed down. Though his rapping voice has more bass to it and his delivery is less flashy and exaggerated, it’ll be interesting to see whether he’ll play up or play down the GD card going forward. Either way, it looks like YG has got itself another Winner.

I’m not going to repeat everything that was written here, but this comparison exists specifically because of one reason: Jimin wants us to think he is Taeyang. Other than singing and dancing like Taeyang, he frequently refers to Taeyang as in this dance cover of “Ringa Linga,” this other thing, and even impersonating Taeyang’s mannerisms.

Also, there are these three letters: abs.

Other than being the best of friends, the two share one thing specifically in common – they are both dance machines. They hail from a long line of great SM male dancers ranging from Jang Woo-hyuk of H.O.T, Yunho, Eunhyuk, Taemin, and now Kai. It’s no wonder that the two are marketed very similarly for their boyish features and their dancing prowess. Perhaps the comparison is no less obvious than in this performance of Taemin’s “Pretty Boy.”

While Taemin does his best Michael Jackson meets Cillian Murphy impersonation, Kai is with him every step of the way. It’s fairly certain to say that their careers will continue on a parallel trajectory, one which will garner them much more popularity and accolades before it’s long done.

There are certainly more of these 2.0 version idols out there; these were just the ones that stood out the most to me. What other idols make you think that he/she is the second coming of idol X?