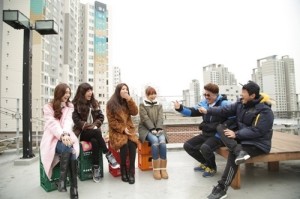 Big Byung will soon have a female counterpart, according to MBC+ Media. They announced on December 19th that in addition to the four membered boy group, Hyung-don and Defconn will also be producing a girl group unit consisting of G.NA, Lizzy from After School, Sohyun from 4minute and Youngji from Kara.

The four will also be appearing on season 2 of MBC Every1’s Hyung-don and Dae-jun’s Hitmaker. While the first six episodes are centred around Big Byung, the latter six, beginning on January 16th, will showcase the production of this new girl group. MBC+ Media has already released teaser pictures of the four striking poses on the familiar rooftop that Hyung-don and Defconn use as their office. Hyung-don and Defconn also look significantly more enthusiastic in the pictures compared to their first meeting with Big Byung – after all, they had joked about wanting to work with a girl group since the end of the first season. 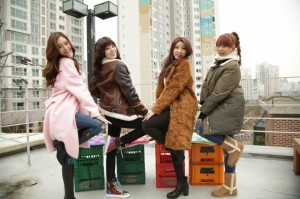 While the selection of members may seem quite random at first glance, G.NA, Lizzy, Sohyun and Youngji all share the characteristic of being bright and quirky, which will likely match well with Hyung-don and Defconn’s bizarre music style. Some netizens have also speculated that given the singing abilities of each member G.NA is most likely the main vocal of the group, however others have pointed out considering the group will be most likely be built to provide comedic relief, there isn’t a need for a particularly outstanding vocalist.

On a side note, Big Byung will be opening for MBC’s Gayo Daejun on December 31.