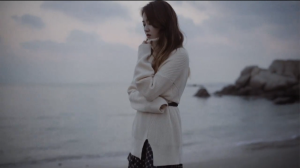 Compared to Beast’s original version of the ballad, the 4Minute vocalist graces the song with more delicate vocals that highlight her sweet and breathy voice against a simple piano accompaniment. Gayoon also covered the rap portion of the song, giving it a new, more subdued feel.

For the new music video, Cube kept the concept simple, focusing on Gayoon alone on a beach. Her isolated nature suits the lyrics of the song which discuss emotional distance in a relationship. The almost gloomy aesthetics match well with Gayoon’s vocal styling. By eliminating any plot of Beast’s MV, the emotions of the track are conveyed through simply Gayoon’s vocal abilities.

The hype surrounding the mysterious release began on November 22nd, when Cube Entertainment released a vague teaser announcing “12:30 Another Version.” The short teaser featured a female walking along an overcast beach while a dulcet piano melody played in the background.

Beast fans immediately began speculating whether “Another Version” implied Beast would release yet another version/MV of the ballad, or if it meant the song would be covered by another Cube artist.

Since the MV release, fan response has been quite mixed from both the B2ST and 4Minute sides. While the two groups are label mates, many fans felt it was too soon for the track to be covered by another artist. Yet, it must be acknowledged that Gayoon’s version is filled with a sincerity and feeling that is both true to the original B2ST track and suited to her vocal style.

Readers, how do you feel about Gayoon’s cover? Do you agree that it was too soon?