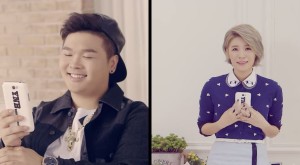 After signing with YNB Entertainment, K-Pop Star 3 duo Almeng has finally debuted with the mini album, CompoSing of Love. The duo took part in all aspects of the album’s production, so the album is their views on love. And, where better to start, and put out as your title track, than a song about the first blind date? “Phone in Love” tells the story about awkward first dates.

Musically, “Phone in Love” is a pop and R&B hybrid. It’s a bit difficult to define the exact genre Almeng would fall under, so hybrid it is. The musical composition has a smooth R&B groove. Meanwhile, the instrumentation combines the piano and bass line with more pop electronic instrumentation. With the simple slow piano introduction, “Phone in Love” sounds like a typical ballad. But, then the beat drops, and the song takes a quick upbeat turn.

It is hard to decide if Choi Ryn and Hae Yong are rapping or not. They both have a sing-song style that makes it seem more like relaxed singing. Given that the “rap” comes during the conversational parts, it makes it hard to determine exactly what they are doing. Their singing is great, of course. They did make the Top 4 on K-Pop Star 3. Hae Yong has a classic R&B voice, while Choi Ryn’s voice is sweet. Together, they make a great vocal duo.

“Phone in Love” tells the story from both the male and female perspective. Their story starts with them getting to know each other through phone communication. The two flirt through messages, laugh at jokes and generally enjoy their talks. They’ve become comfortable with each other, so it’s time to meet.

Their first date doesn’t exactly go as planned. The jokes aren’t funny, they look nothing like what their imaginations thought up, and the awkwardness is thick and palpable. However, after ending the date on a sour note, they still connect through the phone. At the end of the song, there’s a ray of hope for a second chance.

Also, the way “phone in love” sounds like “fall in love” is an additional treat.

The MV does an excellent job at taking the lyrics and putting them in visual form.

Opening with scenes of the Almeng members looking bored and solemn, the pair has no interest in the random person sending them a message. Things change when they get calls from each other to meet. Choi Ryn and Hae Yong rush to get ready and pretty themselves in preparation for their first date. They even go so far as to change their profile pictures to more attractive selections.

Somehow, they find time to happily and cutely exchange messages during their preparations. They do a fine job of multitasking.

Finally, the time of reckoning has arrived. Even in MV form, you can sense the awkward tension. Neither one is happy with what is before them. Their expectations were grander in their minds, and they go back home frustrated and unhappy. 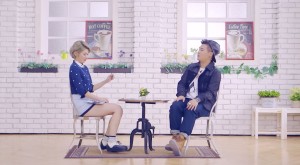 After thinking things over, Hae Yong reaches out to Choi Ryn, and the love bug bites them again.

The MV for “Phone In Love” is just cute. Vibrant colors abound, from the scenery to the outfits. Speaking of outfits, Choi Ryn’s antenna glasses are so kitschy and great. With the additional bubble captions and effects, the concept is very geek chic and nice.

“Phone in love” is probably a song with which many can relate. It’s inevitable to be reminded of the seemingly rampant blind dates some parents push on their children, if K-dramas are any indication. Regardless, people have probably been set up on dates or joined some online dating site and made a connection. Those connections have also sometimes ended in catastrophe. Meeting someone for the first time can be very disappointing. Trying to figure out what to say, how to behave, what to eat is a rather torturous experience. Sometimes that experience works out well in the end. There’s hope for all us single people!

Truthfully, “Phone In Love” is more of a track that would be released in spring than fall.  It is upbeat and optimistic.  If you are looking for a song and MV to brighten up your day, Almeng has provided one.